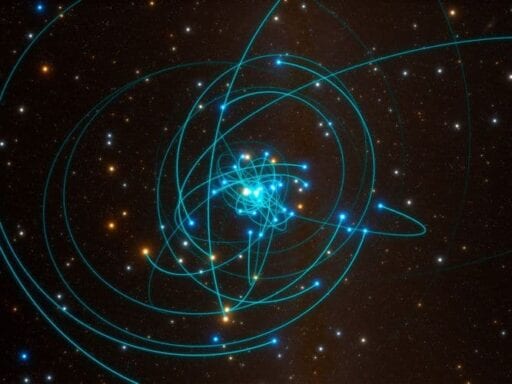 At the center of our Milky Way galaxy lies a monster. It’s called Sagittarius A*, and it’s believed to be a supermassive black hole 4 million times heavier than our sun. The gravity produced by Sagittarius A* is so intense that stars many times more massive than our sun orbit around it at incredible speeds.

One of the stars, called S2, recently passed by the black hole at a speed greater than 15.5 million miles per hour. That’s more than 4,300 miles every second, or nearly 3 percent of the speed of light.

Even cooler: Our telescopes caught S2 whipping around the black hole in May. (This actually happened around 26,000 years ago, well before the beginnings of human civilization, but the light from the star on this orbit just hit our telescopes in May.) And in making these observations, astronomers once again proved that Albert Einstein’s general theory of relativity is correct.

Einstein predicted that when light (such as the light emitted from S2) passed so close to such a powerful source of gravity, it would lose some of its energy. In a way, the light has to struggle to move through the field of intense gravity.

The light literally gets stretched in the spacetime warping effects of gravity. And it doesn’t slow down, but it does lose some of its energy — as measured in wavelength frequency or, as we see it, color. The result is that blue light shifts slightly redder when so close to a strong source of gravity.

This is called gravitational redshift, and it’s exactly what astronomers observed, and published in the journal Astronomy & Astrophysics.

All this is possible because astronomers can watch, in real time, stars orbiting Sagittarius A*. Here’s a time lapse of 20 years of observations from the European Space Agency’s Very Large Telescope (yes, it’s actually called that) looking at stars in orbit around our galactic center. S2 is one of the stars near the center of the image.

And here’s a cleaner, illustrated version of those same observations. The orbital path of the star S2 is outlined in yellow.

Einstein’s general theory of relativity is now more than 100 years old, and scientists have yet to find cracks in it. That’s why they’re looking to the black hole in the center of our galaxy to test the theory. They want to know if Einstein’s theory breaks down in increasingly extreme environments.

And soon, perhaps, we’ll get a much closer look at Sagittarius A*. In April 2017, astronomers collaborated using telescopes around the world to take a picture of the event horizon of the supermassive black hole. The event horizon is the edge of the black hole, the boundary beyond which nothing can escape, even light. They’re still working to sort through the data from the effort, and we don’t yet know if they’ve captured a clear rendering of the horizon.

It will be extremely exciting if the picture does get fully developed: The more we know about this supermassive black hole at the center of our galaxy, the more we can put Einstein’s theory to the test.