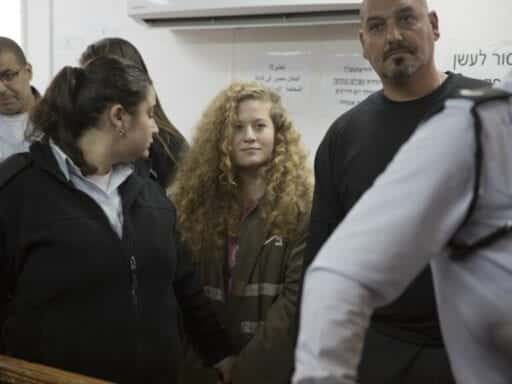 She was just released after spending eight months in an Israeli prison.

By the time she got out, the feisty blue-eyed teen with the wild mane of golden curls had been transformed into an icon of the Palestinian resistance movement.

Hundreds of journalists, international activists, supporters, and family members gathered near Tamimi’s home on the outskirts of the West Bank village of Nabi Saleh to celebrate her release.

Sitting between her father and her mother, Nariman, who was also imprisoned with her, the young activist held a press conference. “I see peace as all of us living together without borders, without occupation, all of us equal,” she told the crowd, wearing her signature keffiyeh, a black and white scarf that’s a symbol of Palestinian nationalism. “The resistance continues until the occupation ends.”

Tamimi, who turned 17 while in prison, gained international fame back in December when a video of her slapping two Israeli soldiers went viral. The incident occurred on her family’s property, hours after Israeli soldiers shot her 15-year-old cousin in the face with a rubber bullet.

Tamimi has been compared to Malala Yousafzai, Che Guevara, and even Joan of Arc. Her face now appears on T-shirts. Two Italian artists painted her face on the giant wall that separates Israel from the West Bank (they were subsequently arrested and told they had three days to leave the country). Nelson Mandela’s grandson invited her to South Africa to receive an award for her bravery.

In Israel, however, the response has been different.

There, Tamimi has been called everything from a terrorist to a PR disaster for Israel because of all the international attention her imprisonment and release have garnered. Though some leftist Israelis support her, a right-wing Israeli blogger coined a nickname for the young, curly-haired activist: “Shirley Temper.”

But who is Ahed Tamimi? What did she actually do? And how did she become an international symbol of resistance? Here’s a brief breakdown of what you need to know.

At 17, Ahed Tamimi already has a long history of activism

Ahed grew up in Nabi Saleh, a small village in the Israeli-occupied West Bank about 30 minutes north of Jerusalem. In 2008, Israeli settlers from a new nearby settlement, Halamish, took control of a freshwater spring on land that had belonged to the Palestinian residents for generations.

Ahed’s father Bassem started organizing weekly protest marches to the spring. Depending on the day, Palestinian, Israeli, and international activists participated in the demonstrations, but they often ended in clashes between Israeli soldiers and protesters.

Over the course of the next few years, Bassem Tamimi was arrested several times, and Amnesty International designated him a “prisoner of conscience.”

In 2011, B’Tselem, an Israeli human rights group, confirmed to the New York Times that they had given the Tamimi family cameras to record the violence. Ahed’s family and her relatives have filmed numerous encounters with soldiers and posted them to social media.

Ahed gained international attention in 2012 after images of her threatening to punch an Israeli soldier who was trying to detain her brother went viral. Turkish Prime Minister Recep Tayyip Erdoğan invited her to Istanbul and gave her an award for her courage.

And a controversial video from 2015 showed Ahed, then 15, biting the hand of a masked, armed Israeli soldier who was again trying to detain her brother Mohammed, 12, and had him in a chokehold. Several other Palestinian women, including Ahed and Mohammed’s mother, were also shown surrounding the soldier, slapping him, and pulling at his clothes and mask.

That video sparked strong feelings and dueling narratives from both sides of the conflict. As the Washington Post’s William Booth wrote at the time:

The kid looked terrified, one side said. The soldier looked freaked out, the other said.

The pro-Palestinian left saw Israeli brutality, with some describing the attempted detention as “kidnapping.” The pro-Israel voices called the Palestinians a mob.

But it would be a different video just two years later that would finally turn Ahed Tamimi into a global icon.

The viral video that landed Ahed in prison

Ahed’s 15-year-old cousin, Mohammed, was at a demonstration against President Donald Trump’s decision to move the US embassy in Israel from Tel Aviv to Jerusalem, when Israeli soldiers shot him in the face with a rubber-coated bullet.

He survived, but doctors put him in a medically induced coma and removed part of his skull. (Israeli officials later arrested him and claimed that he had injured himself by falling off his bike.)

A few hours after the incident, soldiers came to Ahed’s house.

As her mother filmed, Ahed and her cousin tried to push two Israeli soldiers off their property, loudly telling them to leave, and Ahed slapped and hit them. They did not respond in the video footage, and eventually left the property.

Not long after the incident, Israeli military officers arrested Ahed in the middle of the night. When her mother went to visit her detained daughter later that day, she was arrested as well.

Ahad’s father Bassem, in an op-ed for the Israeli newspaper Haaretz, said that he was proud of his daughter for what she had done, and called her a freedom fighter. “My daughter has spent her whole life under the heavy shadow of the Israeli prison,” he wrote. “Her own arrest was just a matter of time. An inevitable tragedy waiting to happen.”

During her eight months in prison, Ahed said she was interrogated three times without a female officer present, which is a violation of Israeli law. Videos of her interrogations circulated, which showed male officers threatening to arrest her friends, and commenting on her skin color and hair.

Her arrest and imprisonment also set off a debate in Israel about how the Israeli soldiers had reacted. Some said that they showed impressive restraint, while others decried their behavior as weak. Israelis also had mixed opinions about her punishment.

Israeli Minister of Education Naftali Bennett, who leads the right-wing Jewish Home Party, said that he hoped Ahed, her mother, and the other woman in the video “would end their lives in jail.”

Israeli cabinet minister Uri Ariel told the Associated Press that Ahed should have been punished more severely. “I think Israel acts too mercifully with these types of terrorists. Israel should treat harshly those who hit its soldiers,” he said. “We can’t have a situation where there is no deterrence. Lack of deterrence leads to the reality we see now … we must change that.”

Others, however, argued that her detention was a bad move. Allison Kaplan Sommer, writing for Haaretz, called the entire incident a PR disaster. “Her detention ultimately did more damage to Israel’s international image than the initial video of her slapping a soldier ever could,” she wrote.

In comments to the press on Sunday, Tamimi said that her time in prison was difficult, and that she used it to study human rights, educate herself and develop patience. Ahed also said that she plans to study law, so that she can help defend her people and the Palestinian cause on the international stage.

Her imprisonment also shone a spotlight on the issue of child prisoners in Israeli jails. According to B’Tselem, almost 6,000 Palestinians were being held in Israeli prisons as of May 2018. Nearly 300 of them are children.

“Of course I am very happy that I came back to my family,” Tamimi said during a press conference, “but that happiness is lacking because I have brothers and sisters who remain in prison. … I wish that all the prisoners will be released.”

But despite her (well-deserved) reputation for being an activist firebrand, Ahed is also still a regular teenager — the first thing she did when she got out of prison was go for some ice cream.

Ahed Tamimi restores her stolen childhood.
After 8 months in Israeli prisons, and only a few hours after she was released, the first thing the 17-year-old child did was buy ice cream. #AhedTamimi #عهد_التميمي pic.twitter.com/9SMOhMjaKb

Those who leave home, and those who stay
Terrible financial advice is going viral on TikTok
6 key moments from Sunday’s debate between Joe Biden and Bernie Sanders
Brit Bennett on publishing The Vanishing Half during the George Floyd protests
Amazon says it unintentionally hid some competitors’ faster delivery options
What the police really believe