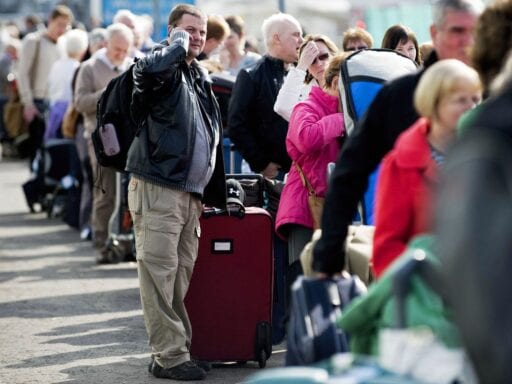 Share
Loading...
Don’t they know they wouldn’t have to wait in such a long line to board an airplane if only they were super rich? | Derek Blair/AFP via Getty Images

A new book explains how everything — from theme parks to higher ed — became so much better for the rich and so much worse for the rest of us.

Almost everyone who visits SeaWorld in Orlando, Florida, endures a fair amount of misery. It’s hot, the lines are long, the food is expensive, and you’ll be surrounded by other sweaty, impatient, frustrated families all waiting for the same thing: a chance to briefly touch a caged marine mammal before a handler whisks you away.

That is, unless you are among the 1,300 people inside the park’s exclusive Discovery Cove. Instead of waiting in lines, families here lounge in cabanas before hitching a ride on their very own dolphin. All that’s needed is $1,240, or roughly three times the cost of a regular ticket.

This is the opening scene of Nelson D. Schwartz’s new book The Velvet Rope Economy: How Inequality Became Big Business, which explains how everything Americans purchase — travel, leisure, education, and health care — suddenly got really good for the wealthy and a lot worse for the rest of us.

Income inequality has risen since the 1970s, and at the same time, companies have begun to cater to the only demographic whose prospects are growing. Fancy new sports stadiums with separate doors for box seat holders, VIP airport terminals, Uber Copters, and the privatization of everything from high school sports to firefighter squads are all examples of what Schwartz dubs the “velvet rope economy.”

“This pattern — a Versailles-like world of pampering for a privileged few on one side of the velvet rope, a mad scramble for basic service for everyone else — is being repeated in one sphere of American society after another,” he writes.

This is a book that will likely make you very, very mad. It will also, however, provide some context on why you feel so mad, and perhaps give a sense of clarity about what it all means and how to fix it. I spoke to Schwartz, an economics reporter for the New York Times, about why the velvet rope economy is so dangerous, and why if you never have to interact with anyone beneath your social class it’s far easier to demonize them. This interview has been edited and condensed. The Velvet Rope Economy is out March 3.

When did you decide to write a book about this?

I did a story about cruise ships. Back in the Gilded Age, like on the Titanic, you had a ship within a ship; there were classes and gates and all that stuff. But the actual cruise ships in the ’60s and ’70s were pretty egalitarian. If you watch The Love Boat, outside their rooms people could go wherever they wanted to; it wasn’t class-demarcated.

Over the last few years, you have restaurants that are only for suite guests with frosted glass windows right next to the restaurant for everyone else. It occurred to me that something larger was going on, that something in our society was becoming a little less egalitarian and a little more like a caste system.

I went to the movies the other night and they had the AMC A-List to get your popcorn faster. I then did a big story about concierge doctors that charge $40,000 a year, and they’ll get you in with a specialist in days when it would otherwise take weeks or months. What you’re seeing is this hierarchy and stratification in the areas that we used to think of as egalitarian, like health care or education.

When did the seeds of a new kind of velvet rope economy begin?

Beginning in the late ’70s and early ’80s, as you had more deregulation and Wall Street taking off, there was less shame about showing off. Conspicuous consumption became more acceptable, and businesses became more comfortable making distinctions between their customers. You saw this in different areas, whether it was ballparks or the cruise ship industry or airplanes. In the ’70s, in the ’60s, there was more of a sense of “we’re all in it together.” As people were willing to flaunt their wealth, they were more comfortable paying to go to the front of the line.

Companies want to grow. When you see the most income growth within the 1 percent, businesses are going to go where the growth is.

You mentioned the class distinctions on the Titanic. Are there similarities you see between the early 20th century and today?

The populism, the anger. We have a democratic socialist candidate who’s the frontrunner for the Democratic nomination. Socialism was very, very popular in the beginning of the 20th century, and it’s made a comeback. Things like Yankee Stadium, where you can’t walk down to the field anymore, where there’s a moat that prevents fans who are not sitting in the Legend section from going down to the field to get autographs — things like that make people feel that they don’t count as much and that they’re second-class citizens.

You use a lot of examples to illustrate how the velvet rope economy operates, but topics you come back to a lot are theme parks, sports stadiums, and travel. Why are these things so segmented?

Theme parks are very clever. The places where the different groups come together for the rides, they call that the merge point. Often the merge point will be in the dark so you don’t see the people cutting in front. Walt Disney envisioned his theme parks as not having classes, but Disney [the company] has chipped away at that over the years. Disney has VIP tours, where for anywhere between $400 and $600 per hour for a minimum of seven hours, they will escort you around the park: literally no lines, they’ll carry your stuff around. It’s almost like an aristocratic experience. That’s a real 1 percent thing.

I was really struck by ballparks and how now there’s so many levels and so much space given to clubs, and the thousands of dollars that you have to pay to get these packages. There was a time when a baseball game was like this quintessentially American experience and now it’s become the province of the 1 percent or the top 10 percent. Ordinary fans are priced out.

You also write about retail death and how affordable malls are dying while only the fanciest among them in the most affluent places remain. Meanwhile, lower-income communities are covered in Dollar Generals and Dollar Trees. What’s the impact of all that?

We’re seeing retail struggles in all but the most affluent places. There’s a loss of social capital, a loss of places to go and socialize.

[Dollar Trees] don’t offer the community feeling and services that locally owned independent groceries do. As you lose locally owned groceries where people come to socialize and have coffee and form community, and I feel like the dollar stores, the money’s sucked out of the community. It isn’t recirculated back in.

The conversation starts to get more dystopian when you talk about access to health care and higher education. Does segmentation in our travel and leisure time make us more accepting of segmentation in the more important parts of our lives?

That’s one reason I wanted to do the book. It’s spreading from leisure and discretionary spending to things like mobility and basic services, like health care and education, even college counseling.

The reimbursement rates for Medicare and Medicaid have been cut, and that’s hurt a lot of the public hospitals that treat a lot of Medicare or Medicaid patients. You see that in terms of rural hospitals, in the way they’ve been shutting down.

I’m curious if while researching this book, you realized there were some things that money still can’t buy?

Money can’t buy you health, obviously. But I was really struck by the way it can get you to appointments with specialists much faster. Whether it’s the concierge medical practices or a service that, if God forbid you’re diagnosed with cancer, will put you in touch with the top doctors. I was really kind of shocked by that.

The doctors aren’t paying each other off; that would be illegal. But doctors have relationships. If you hire these medical practices, they have relationships with a lot of the top doctors so they can get you in front of people you need to see. The other thing is, they have the time. They can research your case from the ground up.

Besides all of the material reasons that this is a problem is that if you never have to encounter people of a lower income level, it’s easier to demonize them. What are the other, more existential dangers here?

The segmentation that’s going on, it’s one reason why we’ve got so much anger and dissatisfaction. The stock market is at a record high, unemployment is very low, job creation is healthy. By any conventional yardstick, the economy’s very healthy, but there’s a lot of dissatisfaction. I think that’s because people spend $500 for a plane ticket and they still have to wait at the end of a long line and watch people go in front of them. They’re squeezed into this tiny, dystopian experience. They’re almost primed to feel dissatisfied and angry, like they’re getting shorted.

At the end of the book, you bring up some bright spots. You say that social norms have always been a counterweight to segmentation — like, you wouldn’t walk into a Starbucks and demand VIP treatment unless you want people to think you’re a total dick. What else do we have to be happy about?

There are companies that don’t do as much segmenting and still do well, like Southwest. The Green Bay Packers have luxury boxes, but the experience still tries to preserve as much of the community experience as possible. In some of these institutions, you have more of that egalitarian spirit, and that preserves more of a sense for Americans that we’re all in it together.

I want people to understand that by being able to bypass things, you remove any incentive to deal with it. Just the way they can take Blade [helicopters] to the airport or use a private suite at LAX. These things that bypass congestion or hassle, they make the elite feel disconnected from everyone else. [I want] people in the elite to understand why there’s so much resentment.

Don’t ask what Martin Luther King Jr. would do today and then ignore his real message
The Derek Chauvin guilty verdict is a huge outlier
Senate Republicans are still struggling on a stimulus deal — even as they expedite a Supreme Court n...
Black Lives Matter sues Bill Barr for order that led to tear gas attack on peaceful protesters
Trump at UN offers his most forceful support for Hong Kong yet
E. Jean Carroll’s defamation lawsuit against Trump, explained