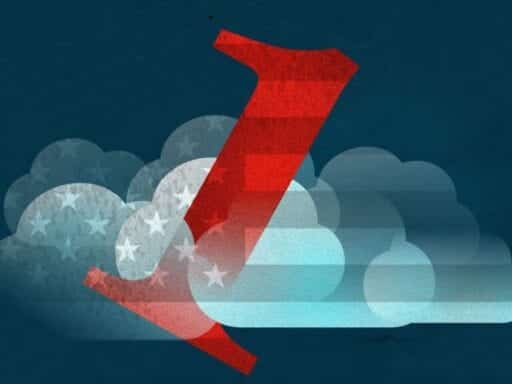 Author Sarah Churchwell on the entangled history of America’s most loaded phrases.

“From this day forward, a new vision will govern our land. From this moment on, it’s going to be America First.”

That’s how President Donald Trump summed up his governing philosophy during his inaugural address last January. The phrase “America First” has been a feature of Trump’s rhetorical shtick since he began campaigning for the White House, but the phrase itself has a long and troubling backstory.

Sarah Churchwell is a professor of American literature and humanities at the University of London, and the author of new book titled Behold, America. It’s a timely survey of two of the most loaded phrases in the American lexicon: “America First” and “American dream,” and how they’ve evolved in opposition to each other.

In this interview, we discuss that evolution and what these century-old slogans have meant to the people who have co-opted them. Language matters, Churchwell argues, and the words we use carry their own historical baggage, whether we’re aware of it or not.

In the case of America First, that history is dark but also deeply instructive. And in the case of the American dream, it’s a history that needs to be understood afresh if we want to reclaim it’s original meaning.

Let’s start with “America First,” a phrase our current president has frequently used to sum up his worldview. Where does this phrase come from?

It was a Republican campaign slogan in the 1880s, which means it appeared much earlier than most people think. But it didn’t become a national catchphrase until President Woodrow Wilson used it in 1915. He was using it to try to keep America out of the first World War. But he was kind of doing a tap dance, because he wanted to placate the isolationists, although he was himself an internationalist.

So Wilson was using America First as a way to maneuver his way through a political minefield by saying America would be first to lead the world, and that it should stay neutral so it could pick up the pieces in Europe after the war. It was ostensibly about maintaining neutrality in the name of leadership.

But then the phrase gets taken up in the name of isolationism almost instantly, and it is quickly connected with other ideas that were also on the rise at the time, especially the rise of the Ku Klux Klan. It became linked to anti-immigration movements, and sympathizers of fascism, and was popularized by Charles Lindbergh, the famous American pilot who lead the “America First Committee” — a group of some 800,000 Americans who wanted to keep us out of WWII.

“Trump represents a strain of American thinking that goes back a long, long way”

So it began as an antiwar isolationist slogan, and then morphed into an explicitly xenophobic and fascist slogan?

Yeah, and it happened pretty predictably. If you’re in an anti-immigrant and xenophobic debate, then “America First” will kind of magnetically accrue those anti-immigrant sentiments. Put America first, native-born people first. It connects back to the nativism of the 1840s and 1850s, and it sounds broadly anti-immigrant. In a moment where people were very concerned about waves of immigration, which was a big motivating force for the KKK, it was only natural that America First would become a rallying cry for nativists and racists.

To be clear, who did the America First-ers want to keep out?

Anybody who’s not white, not Protestant, not what they saw as a native-born American, an old-style American. And that was their notion of what America was supposed to be.

So America First did have very strong resonances with ideals like “Make America Great Again,” which was a phrase that they nearly echoed as well. The idea then, as now, was that the true version of America is the America that looks like me, the American fantasy I imagine existed before it was diluted with other races and other people.

America First spoke directly and powerfully to that segment of white America that felt they were losing their power, their dominance. It was a way of saying me first, only my version of America should be allowed to have any sway here.

You have to remember, too, that there was this notion at the time of “100 percent American,” which meant 100 percent Anglo Saxon blood. And that coincided with the so-called one-drop rule, which was an old racist rule in America in which one drop of black blood made someone legally black and therefore subject to slavery or Jim Crow or miscegenation laws. So all of these ideas were used interchangeably, and they folded neatly into the America First movement.

I want to pivot to this idea of the “American dream,” which intersects with the America First movement.

So the American dream, as initially conceived, was very much rooted in a working-class social democratic aspiration for equality and upward mobility, but you describe how this notion was gradually co-opted and turned upside down. What happened?

We associate this phrase with ideas of free market capitalism and with conversations on the right about individual opportunity and liberty and all this small government stuff.

But when you search for the origins of the phrase “American dream,” it turns out it emerged on the progressive left to argue the opposite side of the case — to say that unchecked capitalism and huge increases in private wealth would destroy the American dream of opportunity, because of inequality.

The meaning of the phrase started to change after WWII. The newfound emphasis on individual economic liberty was in tension with the idea of justice for all, and this became more of a problem as economic inequality increased and the spoils of capitalism were restricted to a privileged few later in the century.

So what we had was a series of debates as the country tried to keep liberty and justice in some kind of uneasy equilibrium, but ultimately the emphasis on individual liberty and free market capitalism trumped everything else.

In the book, you talk about how these two phrases, “America First” and the “American dream,” naturally collided and came to represent the struggle between liberal democracy and authoritarian fascism.

Well, the collision was inevitable, especially when America First shifted from an isolationist slogan to an explicitly nativist, white nationalist slogan.

Early on, the American dream was being used all the way up to WWII as a way to describe not free market capitalism, but the rights of everybody within a democratic society, and the dreams of America for fairness and self-government. Those ideas were bound to collide with the America First movement.

What I found so interesting was that people were speaking of the American dream as a concept that had racial equality built into it, that was inimical to anti-Semitism and other kinds of bigotries or racial prejudices, as early as the 1930s.

When you hear President Donald Trump declare the American dream dead and promise to put America first, what do you think?

I think it would be good if we all read more history. Trump’s version of the American dream is a cartoon version from the 1950s, when guys like him had it really good, even better than today. But other people are pushing back, and saying you can’t dominate everybody, and Trump feeds into this resentment and he has unleashed it as well as anyone.

And when he says he’s going to put America first, he specifically means this vision of America first. His advisors know this stuff. Steve Bannon knows this stuff. Bannon has read history, and he uses phrases like “economic nationalism” which were also associated with America First in the 1920s. It’s not a coincidence.

They chose the phrase “America First” pretty late in the campaign, and it seem pretty deliberate. Donald Trump didn’t stumble on it. One of the things I talk about in the book is that Trump was very well aware of what it meant, at least in the 1990s when he talked about it in relation to Pat Buchanan’s campaign, and called Buchanan an anti-Semite and said that he was using the phrase to curry favor with the right-wing wacko nut jobs, which he obviously decided was a good tactic in 2016.

“America First spoke directly and powerfully to that segment of white America that felt they were losing their power, their dominance”

Trump personifies one side of the moral and political tension this book describes, and maybe that’s the most important fact about his political existence — that there is nothing new about him or what he represents, that he is simply the latest expression of a core feature of the American psyche.

I totally agree with that. Indeed, I wanted this book to make that very point. Trump represents a strain of American thinking that goes back a long, long way, and the debate we’re having now about what kind of country we want to live in, and who has the right to be here, is hardly new.

We’ve always been divided and we’ve also been divided along exactly these lines. And at that moment, the side that wants America to go backward, to include fewer people, is in the ascendancy, and it’s important that we recognize that and realize that we’ve been here before, and that nothing is inevitable.

If knowledge of history is truly emancipatory, and I think it is, what does knowledge of this history — the history of America First and the American dream — emancipate us from?

Well, it emancipated me from the belief that the American dream was always what we say it is today. It used to be so much bigger, so much more inclusive, and the version we inherited isn’t the original version or the most inspiring or just version. It reminded me that our aspirations can be bigger and better, and that the story of America can always change.

Knowing history also has a way of clarifying the fight you’re in. It’s important to know what America First means and what it represents, because that’s what we’re up against right now, and it’s a very old fight. So in a way, it’s liberating to know that, to know that the struggle is ongoing and has to be continually waged.

For Native Americans, voting rights were hard-won. Mail-in voting could undo the gains.
This week in TikTok: The funniest skin care influencer you don’t know yet
How the Milwaukee Bucks kicked off a historic NBA protest
The Conners killed off Roseanne via opioid overdose. The real Roseanne Barr is not happy.
The future of commercial space travel is almost here with the latest SpaceX launch
Technical difficulties in Iowa caucuses lead to widespread confusion, delayed results