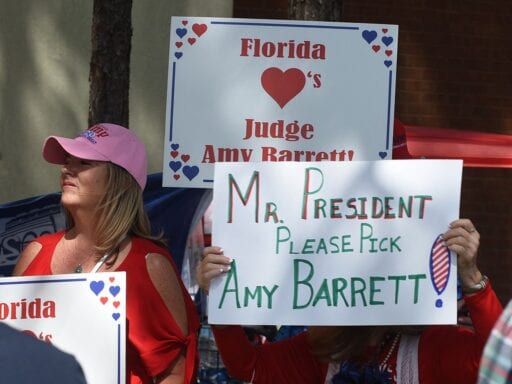 She once questioned the court’s landmark ruling on marriage equality.

President Donald Trump reportedly will nominate federal Judge Amy Coney Barrett to replace the late Justice Ruth Bader Ginsburg on the Supreme Court, a choice LGBTQ rights groups are concerned could lead to a reduction in the rights enjoyed by LGBTQ Americans.

The Supreme Court has been historically been important for the advancement of LGBTQ rights, with its rulings giving gay and lesbian people marriage equality and recently ruling that queer and trans people are protected from employment discrimination under federal law.

And there are a number of important cases soon to come before the court; for example, Fulton v. City of Philadelphia is set to be heard the day after election day. That case, in which a religious adoption agency is seeking the right to turn away LGBTQ couples, will determine whether taxpayer-funded organizations are allowed to discriminate against LGBTQ people.

Senate Republicans have already promised a speedy confirmation process to install Trump’s nominee before the election, suggesting Barrett, if she is indeed the president’s nominee, will soon be on the Supreme Court.

Barrett is a Catholic and former Notre Dame law professor; she has not said how she would rule in cases about LGBTQ rights, but she has spoken and written extensively about her conservative view on reproduction and sexuality.

And these remarks have some of her critics concerned that she will swing the balance of the court towards a more conservative agenda on the issue of LGBTQ rights.

What we know about Barrett’s record on LGBTQ rights

As Vox’s Ian Millhiser has explained, while Barrett has not served for long as a federal judge — and thus does not have as long a judicial record as many Supreme Court nominees have has — as a law professor at the University of Notre Dame, “she frequently weighed in on many of the cultural fights that animate religious conservatism.”

One of these is the issue of LGBTQ rights, which has been a long and evolving interest for conservatives, many of who have fought against policies such as trans people using the bathrooms that align with their gender identity and transition care for trans teens.

Some of Barrett’s most notable comments on the issue came during a lecture she gave at Jacksonville University ahead of the 2016 presidential election, while she was a professor at the University of Notre Dame. In that lecture, she defended the dissenters in Obergefell v. Hodges, the landmark Supreme Court ruling which made marriage equality the law of the land, as well as suggesting the Title IX rights afforded to transgender people ought to be reviewed by lawmakers.

“Maybe things have changed so that we should change Title IX,” Barrett said during the lecture. “Maybe those arguing in favor of this kind of transgender bathroom access are right. … But it does seem to strain the text of the statute to say that Title IX demands it, so is that the kind of thing that the court should interpret the statute to update it to pick sides on this policy debate? Or should we go to our Congress?”

Also concerning LGTBQ advocates is that Barrett — who is Catholic — signed a letter in 2015 addressed to Catholic bishops that detailed her personal beliefs, and that included a statement that “marriage and family founded on the indissoluble commitment of a man and a woman.”

This, Millhiser notes, would seem to “suggest that Barrett personally opposes marriage equality — and potentially opposes extending other rights to LGBTQ people.”

In her Jacksonville University lecture, Barrett similarly deployed language, suggesting an adversarial stance towards trans issues by misgendering transgender women in the calling them “physiological males.”

This is one statement, but to many advocates her words seem an ominous portent for the nascent transgender rights movement, which scored a big win at the high court this June in Bostock v Clayton County, which determined that transgender people are protected from employment discrimination under federal civil rights law.

The Human Rights Campaign, for instance, has taken issue with Barrett’s likely nomination, highlighting Barrett’s Jacksonville University speech. In a statement Friday, Alphonso David, president of the Human Rights Campaign, said “If she is nominated and confirmed, Coney Barrett would work to dismantle all that Ruth Bader Ginsburg fought for during her extraordinary career.”

Of concern to activists like David is that Bostock isn’t the only trans rights case that will hit the Supreme Court under the next justice’s tenure. The court will be called upon to rule on several big legal battles have been brewing for years, over issues such as transgender student bathroom rights, or trans women participating in women’s sports.

Should Barrett be confirmed, her work on the court may depart from her personal views. However, as Millhiser writes, her personal and professional thinking has aligned in the past:

Barrett’s limited judicial record suggests that her approach to constitutional interpretation aligns with her conservative political views. In Planned Parenthood v. Box (2019), Barrett joined a brief dissent arguing that her court should rehear a case that blocked an anti-abortion law before that law took effect. That opinion argued that “preventing a state statute from taking effect is a judicial act of extraordinary gravity in our federal structure” — suggesting that Barrett would have prevented her court from blocking the anti-abortion law at the heart of that case if given the chance.

And it is this judicial record, limited though it is, that has led activists to express concern Barrett’s appointment could limit LGBTQ rights in future rulings.

Sen. Bill Nelson, Rep. Debbie Wasserman Schultz barred from Florida child migrant facility
Jay Inslee’s presidential campaign is all about climate change
Now the states are coming after Google and Facebook, too
The 4 major unknowns of how vaccines will affect the Covid-19 pandemic
In Sharp Objects’ “Closer,” women’s stories don’t belong to them
5 fact-checks from the Senate’s hearing on social media