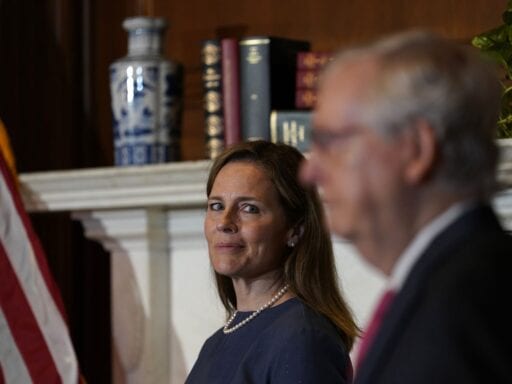 The Republican Supreme Court was brought to you by a malapportioned Senate and the Electoral College.

In 2016, President Trump lost the national popular vote to Democratic nominee Hillary Clinton. He lost it by a lot — 2,865,075 votes, to be precise.

Meanwhile, the Senate just voted to confirm Trump’s third nominee to the Supreme Court. The vote was almost entirely along party lines, with Sen. Susan Collins (R-ME) crossing over to vote with all 47 members of the Senate Democratic caucus.

These two numbers — 2,865,075 and 13,524,906 — should inform how we view the actions Barrett will take now that she is one of the nine most powerful judges in the country. Barrett owes her new job to two of our Constitution’s anti-democratic pathologies.

If every American’s vote counted equally in a presidential election, Hillary Clinton would be president right now and Barrett would still be a law professor at Notre Dame. And if the Senate did not give Wyoming the same number of senators as California — despite the fact that California has more than 68 times as many people as Wyoming — Barrett would not have been confirmed.

And Barrett is not unique. The first justice in American history to be nominated by a president who lost the popular vote, and confirmed by a bloc of senators who represent less than half of the country, is Neil Gorsuch, Trump’s first nominee. The second is Brett Kavanaugh, Trump’s second nominee. The third is now Barrett. That’s half of the Supreme Court seats held by Republicans.

It is likely, moreover, that the Court’s newly enlarged Republican majority will make the United States even less democratic. Republican-appointed justices severely weakened the Voting Rights Act — the primary legal safeguard against racist voter discrimination — in Shelby County v. Holder (2013) and Abbott v. Perez (2018). Just last week, the Court divided 4-4 on whether to toss out an unknown number of ballots in the pivotal state of Pennsylvania.

The Pennsylvania Republican Party, which hopes to see these ballots tossed out, has already asked the Supreme Court to take up this case again. With Barrett on the Court, the GOP may now have five votes to prevail.

And that’s just the beginning. The Supreme Court plans to hear two related cases this term, Brnovich v. Democratic National Committee and Arizona Republican Party v. Democratic National Committee, which could potentially dismantle what remains of the Voting Rights Act. At the very least, these cases are likely to weaken the nation’s protections against racist voting laws, adding to the damage done by Shelby County and Perez.

Giving states broad leeway to target Black and brown voters will also likely hamper the ability of the Democratic Party, with its multi-racial coalition, to compete for the presidency or for control of Congress.

American democracy, in other words, has slipped into a death spiral. Anti-democratic features of our Constitution enabled a party that does not enjoy majority support to gain power. That party is now entrenching its power by appointing judges who tend to be hostile to voting rights. And, as the courts hand down more and more decisions undermining the right to vote, Democrats will find it harder and harder to compete in national elections.

Democrats, however, may have a brief opportunity to pull the nation out of this death spiral. Right now, polls show Democratic presidential nominee Joe Biden favored to win his upcoming election, and Democrats are favored to gain control over both houses of Congress.

If Democrats control Congress and the White House, they can add seats to the Supreme Court or enact other judicial reform measures that can dilute the influence of judges like Barrett and even reestablish a pro-democracy majority on the nation’s highest Court.

Even in the best-case scenario for Democrats, however, there is no guarantee that they will hold onto the Senate for more than two years. Indeed, because of Senate malapportionment, Republicans stand a decent chance of regaining control of the Senate in the 2022 midterm elections — especially if a Republican Supreme Court spends the two years between now and the midterms limiting the right to vote.

Democrats, in other words, will likely need to make a very difficult decision very quickly: add seats to, or drastically reform, the Supreme Court, or risk the further entrenchment of Republican power thanks to our anti-democratic Constitution.