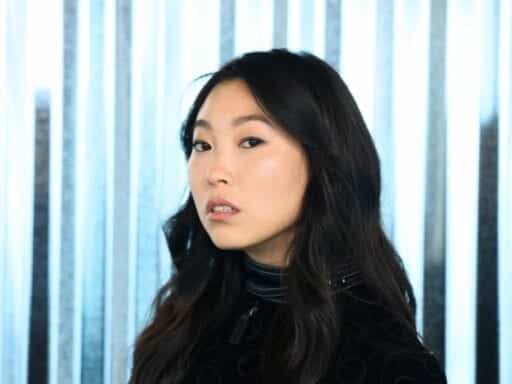 This week’s SNL host is pulling off the Melissa McCarthy/Tiffany Haddish maneuver — with one big difference.

Nora Lum, a.k.a. Awkwafina — the YouTube viral sensation turned star in this year’s Ocean’s 8 and Crazy Rich Asians and this week’s Saturday Night Live host — is having a very good 2018.

Her movies are doing well: Crazy Rich Asians is on track to be one of the biggest success stories of 2018; Oceans 8 has outearned all the other Oceans movies. And Awkwafina herself is being hailed as part of an immensely likable ensemble in Oceans 8, and as the breakout star of Crazy Rich Asians.

“This is what Hollywood is built on,” gossip expert Elaine Lui told the Washington Post of Awkwafina’s current moment: “the moment a star arrives.”

But when Lum talks about her current star-making moment, she doesn’t seem to fully associate it with herself. That’s because she talks about Nora and Awkwafina as two different people.

She talks about leaving her office job for show business as going off “in pursuit of Awkwafina.” She switches between the first and third person when she talks about her persona. “You can put as much makeup [on me as you want] and put me in dance classes, but she’ll never be mainstream,” she told GQ, referring to herself and her persona (italics added). “It’s just not going to happen.”

“Awkwafina is someone who never grew up, who never had to bear the brunt of all the insecurities and overthinking that come with adulthood. Awkwafina is the girl I was in high school — who did not give a shit,” she explained to the Guardian in June. “Nora is neurotic and an overthinker and could never perform in front of an audience of hecklers.”

It’s a classic Norma Jean versus Marilyn Monroe split, and it’s laying some important groundwork for how Awkwafina’s career might develop.

That means that Awkwafina is currently on track to emulate the career path modeled by McCarthy and Haddish before her. But because she’s developed the Awkwafina/Nora split, she’s also left herself an escape route.

An unruly woman is a woman who transgresses the boundaries in which women are supposed to live their lives, and preferably one who does it gleefully, laughing all the time. She is the opposite of what we are taught a woman is supposed to be: She might be fat, or she might straightforwardly pursue sex, or she might just genuinely like herself without apology.

In her book The Unruly Woman, film scholar Kathleen Rowe names Miss Piggy — with her “overpowering” size and affection and her penchant for karate chops — one of the greatest unruly women on the American screen. The unruly woman breaks the rules of femininity, and she makes us love her for it.

When Melissa McCarthy exploded onto the screen in 2011’s Bridesmaids — stealing dogs and shitting in sinks with glee and abandon — she was breaking the rules on a new level. Bridesmaids was a whole movie about women who got to be gross and funny, and McCarthy was the grossest and funniest one of all.

GQ called her performance “the bravest, most batshit, most balls-out, and hilarious performance of the year,” and devoted an oral history to it. McCarthy “lit up the screen like a 500-watt bulb,” said Rolling Stone.

“Most of us remember the first time we realized that McCarthy was the funniest thing since really funny sliced bread,” recalled E Online five years later. “Some Bridesmaids fans cite the engagement scene when she pledges to ‘Climb that like a tree,’ others prefer the sight gag of her driving down the highway while wrangling a litter of puppies.”

McCarthy’s performance was so compelling that it effectively redirected her career. Before Bridesmaids, she was best known for being bubbly and sweet on shows Gilmore Girls and Mike and Molly; post-Bridesmaids, McCarthy would be best known for starring in a string of raunch comedies, some of them directed by Bridesmaids’s Paul Feig, and Mike and Molly would be tweaked to give McCarthy and her slapstick acumen more attention.

Six years later, Girls Trip premiered and it was Tiffany Haddish’s turn to take the Unruly Woman crown. Girls Trip, like Bridesmaids before it, was a raunchy sex comedy, and Haddish, like McCarthy before her, was the raunchiest one in the cast.

What was shocking and exciting about these two performances was that McCarthy and Haddish were breaking all the rules of femininity — and they were doing it with incredible warmth and self-possession. (“I just love anybody who’s that comfortable in her own skin,” McCarthy confessed to GQ.) McCarthy and Haddish were utterly unruly and they loved themselves, and that made the rest of us love them too.

Moreover, they were breaking those rules in an extremely specific context. Part of what made Haddish and McCarthy’s performances so compelling is that they were playing the most unruly women in a group of women who were already pretty unruly. They were there to establish the outer limits in each movie’s Overton Window of raunch: next to McCarthy shitting in the sink, Kristen Wigg projectile vomiting doesn’t seem so bad. Jada Pinkett Smith pees onto a crowd while hanging from a zip line, too, but she does it accidentally, while whimpering with shame; when Haddish follows suit, she does it with both intention and glee.

Both Bridesmaids and Girl’s Trip are id-driven movies, and McCarthy and Haddish provide the bulk of the id. That frees up the rest of the cast to be grownups while they get to have all the fun.

As a culture, we seem to need to pick a woman every few years who is allowed to be bigger and brasher and louder and grosser than everyone around her, who is able to be unruly and who forces us to love her anyway. We want someone who is willing to break the rules, and to make the argument through the sheer force of their charisma that the rules are there to be broken. And this year, it’s Awkwafina’s turn.

Awkwafina is the unruly woman to Nora Lum’s ingenue

Awkwafina emerged into public consciousness primed to take the crown as America’s next favorite unruly woman. Her first viral hit was her YouTube rap “My Vag,” which sees her pulling a violin out of an off-camera vagina and boasting, “My vag speaks five different languages, and told your vag, ‘Go make me a sandwich.’” Her first movie role was a small part in the raunch-comedy Neighbors 2, which saw her flinging used tampons at a house.

Her big breakout movie came with Crazy Rich Asians, which doesn’t have the raunch of a Bridesmaids or a Girls Trip: it’s a conventional romantic comedy with no jokes about bodily fluids. But within the confines of a classic romcom, Awkwafina shines with her own kind of unruliness, one that’s calibrated to stand out against the film’s more traditionally comedic tone.

Critics have drawn the connection to her immediate predecessor in unruliness. Awkwafina “Tiffany Haddishes away with this film in a big old way,” said Glen Weldon on NPR’s Pop Culture Happy Hour. “You’re going to get tired of people telling you” about her.

Awkwafina is playing Peik Lin, the main character’s best friend, and it’s her blonde-wigged brashness that powers the movie through its funniest scenes. She feels like she’s in a different, slightly coarser movie than everyone else, in a good way.

Awkwafina is the id monster of this movie in the same way that McCarthy and Haddish were the id monsters of their respective breakouts, and it’s the over-the-top new money crassness of her character Peik Lin that allows Constance Wu’s Americanized Rachel Chu to feel comparatively well-behaved. Peik Lin has set the outer limit of the Overton Window of unruliness in this world.

In the sweet, mannered, Austenian universe of Crazy Rich Asians, when Peik Lin says, “Bawk, bawk, bitch,” or tiptoes through a lavish house party in designer pajamas, she’s being about as unruly as anyone could manage. She’s the only person in the whole movie who gets to say fuck.

“In a romantic comedy, you get very earnest,” director John Chu told Rolling Stone, “and you need someone who can pop it, who feels confident and different, not the same old sidekick.” That’s where brash, bold Awkwafina comes in. But it’s not where careful, considering Nora Lum comes in.

Which is not to say that Awkwafina hasn’t incorporated Nora Lum into her acting at all. “I don’t know which one I turn on for acting,” she told GQ, before suggesting that she might rely on both: “Lum is the calculating, thoughtful preparation,” the article summarizes. “Awkwafina is the chaos.” But it’s the chaotic glee of Awkwafina that’s powering her rise to movie stardom right now, and Awkwafina’s unruliness that critics are lauding.

But by separating Awkwafina from Nora, Lum has also built an alternative future for herself. She has essentially replicated the work that the unruly woman traditionally does in a comedy within her own persona: Awkwafina sets the outer limits of the Overton Window of raunch the way Peik Lin does in Crazy Rich Asians, so that beside her Nora Lum looks comparatively more conventional, the way Rachel Chu does next to Peik Lin. Awkwafina is the id monster, and Nora Lum the grownup.

And that duality gives Awkwafina the possibility for enormous freedom in her future career. She can be both the unruly woman and the ingenue, because she’s laid the groundwork for audiences to see her as both. She’s built her very own personal foil.

There are no good choices
Big Tech nemesis Lina Khan is gaining traction for top Biden antitrust role
How school funding can help repair the legacy of segregation
Coronavirus memes let us see internet humor evolving overnight
The makers of OxyContin may have tried to hide $1 billion in assets
Hannah Gadsby on comedy, free speech, and living with autism