How Biden could actually deliver on his climate goals 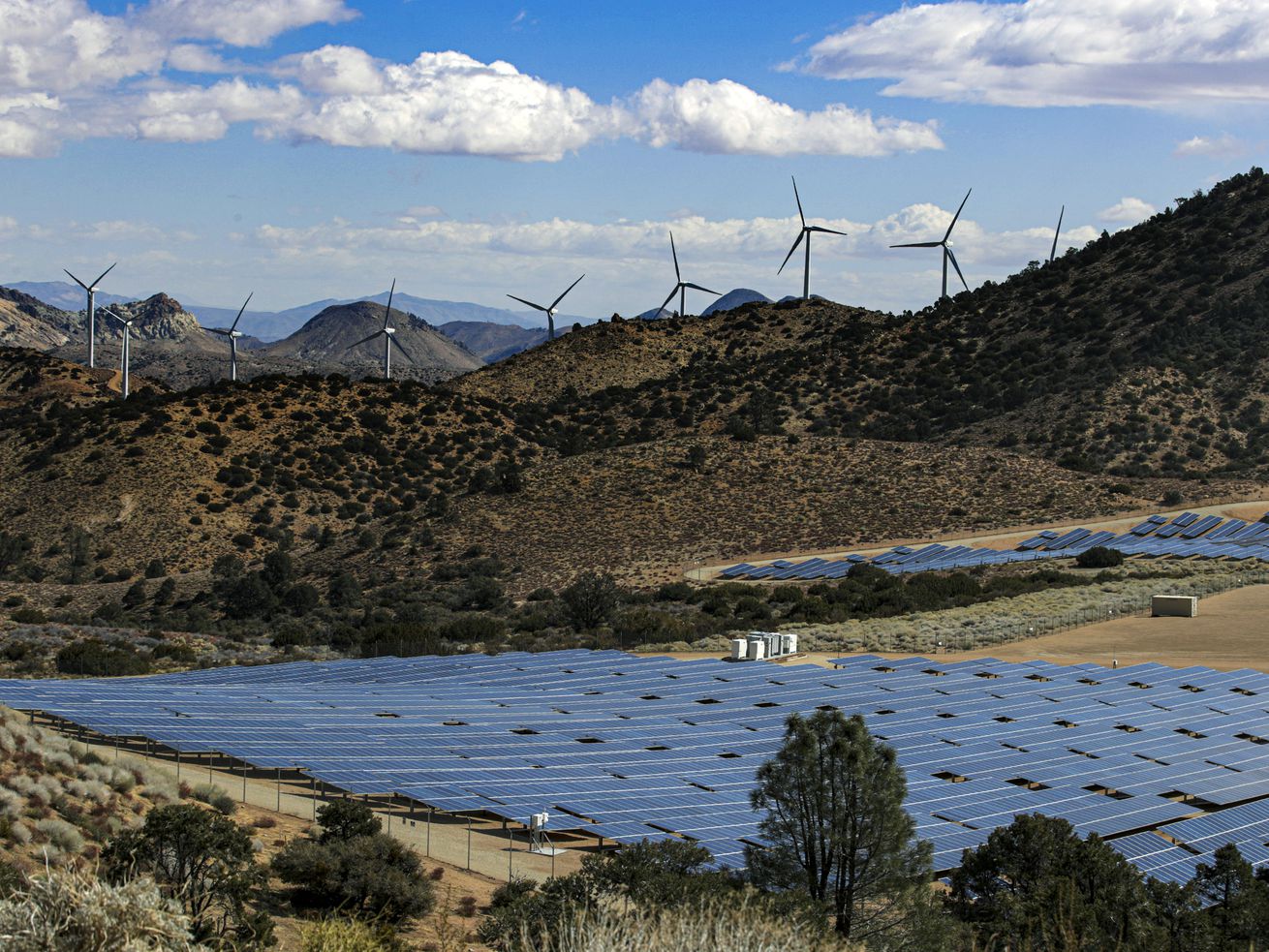 It’s possible to imagine the United States in 2030, if the country pulls off President Joe Biden’s climate ambitions.

Every last one of the nation’s 191 coal power plants is closed or on its way out, and natural gas in the power sector is rapidly declining. Renewables power more than half of our electricity needs, and offshore wind turbines and large utility-scale solar installations are a common sight. A majority of new car sales are zero-emission electric vehicles, while most or all of the bus fleet has transitioned to electricity. Gas-powered appliances and buildings in new construction are a thing of the past.

So what’s the plan to actually get there?

Biden’s economy-wide target of at least a 50 percent cut in greenhouse gas emissions below 2005 levels by 2030 doesn’t tell us much about what it will look like sector by sector. As Vox contributor David Roberts wrote, with the new commitment, Biden is only “rallying the troops and pointing them in the right direction.” How his policies can outlast his administration and how Congress responds matter even more.

Fortunately, a lot of smart people have been developing a roadmap they say is very doable.

At least a dozen recent studies published by think tanks, scholars, and activists show how to slash emissions in half by 2030. The White House climate task force will also release a sector-by-sector plan later this year.

While they all make slightly different assumptions, the experts agree that we don’t have to wait for technological breakthroughs to tackle three of the most polluting parts of the economy. “We have solutions readily available” to get to the 2030 target, explained Natural Resources Defense Council international program director Jake Schmidt.

There’s also the much bigger, longer-term prize: Carbon neutrality by 2050. That’s going to be much harder because the country then needs to see major strides in challenging sectors we don’t have easy solutions for yet.

To slash pollution to net-zero by midcentury, the United States and world will need to look beyond clean electricity and cars and instead at other major sources of greenhouse gas pollution. Those include heavy industry, agriculture, land-use strategies, and international shipping, which produce a bulk of global carbon and methane pollution.

But the world can’t wait another few decades to start figuring out these harder-to-decarbonize sectors. “You need to work backwards from net-zero [in 2050] and figure out how to get back to the present day,” said Pete Ogden, vice president for energy, climate, and the environment at the United Nations Foundation.

The end of coal, the decline of gas, and the rise of electric vehicles

All of the studies from the likes of America Is All In, NRDC, Energy Innovation, and Lawrence Berkeley National Laboratory are in agreement about one thing: The remaining coal plants in the United States need to shutter before 2030 (barring a miracle breakthrough on carbon capture and storage).

One way to get there is a national clean electricity target, passed by Congress. Biden promoted a plan to pass a standard that would raise utilities’ renewable targets to 80 percent emissions-free fuel by 2030, and ratchet down gas dependency by 2035. The goal would increase emissions-free sources from 40 percent of the grid (counting nuclear along with renewables). His EPA is also already working to prepare new power plant regulations that take the place of the Obama-era Clean Power Plan.

As the power sector gets cleaner, appliances, buildings, and cars connected to the grid get cleaner, too. Biden has funds to boost electric vehicle charging stations in his infrastructure plan, but there’s much more that needs to follow, namely, ambitious fuel economy standards that transition cars, light trucks, and buses off of gas.

But to really spell the end of coal, the nation needs regulatory policy that sets a clear direction that will outlast political swings from president to president. The Biden administration has proposed a national clean electricity standard, or CES, to ensure the strongest possible signal.

“The Biden administration goal of 100 percent clean power by 2035 implies an interim goal of at least 80 percent by 2030. Proven and promising technologies can get us there, though the exact combination of clean resources will be influenced by market forces. A strong federal CES is needed to support consistent investment in these low-cost zero-carbon resources and technologies,” the research group Energy Innovation writes in its report.

Making big strides in these two sectors would tackle the two biggest sources of pollution in America: transportation with 29 percent of emissions and electricity with 25 percent.

We need to get serious about industrial emissions

After cars and transportation, heavy industry has the biggest climate footprint in the United States at 23 percent (and 22 percent globally). And globally, 10 percent of emissions comes from combusting fossil fuels for the intense heat needed to create cement, steel, and petrochemicals. These plants are often located in low-income communities and communities of color, so cleaning up their climate pollution also would save lives from the risks of air pollution.

It’s possible to clean up some industry pollution by focusing on energy efficiency and relying on the cleaner grid, using technology that’s already available to begin to lower industrial emissions by 2030. But after grabbing that low-hanging fruit, major R&D and new policies will be needed for these sectors.

This is where the roadmap gets murkier, because there are no clear alternatives for fossil fuels when it comes to making cement. That’s where emerging technologies may come in, including carbon capture and storage and hydrogen.

The Department of Energy is making a bet that “green” hydrogen will be a big part of the answer. As The Verge’s Justine Calma explains, for hydrogen fuel to be truly “green” it would have to be made with renewables, though it’s currently too expensive to do that at scale.

Energy Secretary Jennifer Granholm announced at the summit that DOE wants to drive the price of hydrogen down 80 percent to be “competitive with natural gas.” This would indeed be a game changer, but it will require a big investment in research and deployment.

We can’t ignore agriculture, land use, and international shipping

Several sectors aren’t likely to see a ton of change until after 2030. Agriculture and landfills are major sources of pollution, making up a full 40 percent and 20 percent of global methane emissions, respectively. And global shipping and flying are smaller but still rising sources of pollution.

There’s a similar theme for all of these: While there might be alternatives to fossil fuels, the alternatives are still too expensive, or too nascent, to put into practice without massive government investment.

Methane from agriculture and landfills is harder to tackle because so much of it is tied to our meat consumption and food waste. Groups like the Environmental Defense Fund have urged that the Biden administration start with a 40 percent cut in methane emissions by 2030, with most of that coming from cutting down on leaking methane pollution from oil and gas operations.

Biden’s Earth Day summit showed countries are starting to ramp up their investment in decarbonizing these trickier industries, for example a new partnership between the United States and Denmark to work on maritime shipping. “The technologies that we need to decarbonize shipping are known to us so they need investment and they need to be scaled up,” special climate envoy John Kerry said. “It’s incumbent on all nations to send a clear signal to the industry so they will make those investments in the near future.”

Meanwhile, when it comes to agriculture’s methane problem, the White House hasn’t set any specific strategy. And he’s certainly not banning meat.

So far, the furthest the administration has gone is Agriculture Secretary Tom Vilsack’s announcement of a vague new initiative “to accelerate global agricultural innovation through increased research and development.” And the US announced an initiative with the United Arab Emirates to launch the Agricultural Innovation Mission for Climate to focus on research and development. R&D could focus on promising crops for carbon capture, and feeds that lower the methane footprint from cows.

Climate solutions won’t “miraculously” materialize. We must do the work.

To make up for the United States’s part as the world’s biggest historic polluter, it has to basically learn to walk and run at the same time. The country can set aggressive short-term targets for clean power, followed by cars, all while laying the groundwork for the long-term in areas like industrial emissions, agriculture, and land use.

Technology won’t swoop in to save us with some breakthrough in 2049. The next nine years are critical for every part of the fossil fuel economy, not just where we get our electricity. As NRDC’s Jake Schmidt said, “You can’t obviously wait to find the solutions until 2030, and then hope that they’re miraculously there.”

Can bite-sized sessions of therapy help kids struggling with depression?
The January Democratic debate, like the slate of Oscar nominees, will be very, very white
Biden is now the presumptive Democratic nominee. Here’s how he stacks up against Trump in the polls.
4 winners and 3 losers on Super Tuesday
Special counsel Robert Mueller has agreed to testify in front of Congress
The EU condemns Trump’s travel ban and the NBA stops playing: Thursday’s coronavirus news