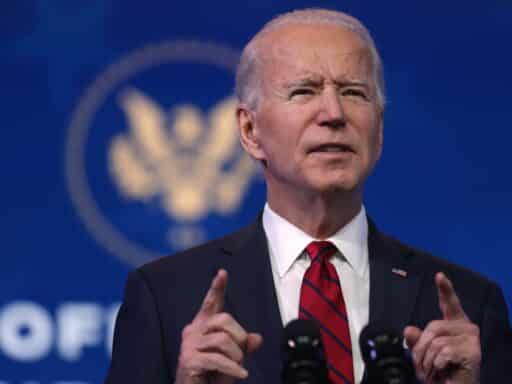 Eviction moratoriums, a mask mandate, and an end to Trump-era policies: what Biden has planned for his first 10 days in office.

President-elect Joe Biden may already have an ambitious legislative rescue plan, but he isn’t waiting for Congress to begin addressing what his team calls the “four overlapping and compounding crises” facing America.

Biden is also planning a sweeping set of executive actions to address the four crises — the coronavirus, the economy, climate, and racial justice — according to a memo outlining the president-elect’s first 10 days in office, sent by Biden Chief of Staff Ron Klain to incoming White House senior staff on Saturday.

According to Klain, an Obama administration alum who also served as Biden’s chief of staff during his vice presidency, Biden’s day-one priorities include extending freezes on federal student loan payments, evictions, and foreclosures; implementing a national mask mandate on federal property and during interstate travel; and rolling back several Trump-era actions, including the travel ban on Muslim-majority countries.

The memo, which comes just days before Biden’s January 20 inauguration, also touches on immigration, criminal justice, and health care issues and emphasizes that there will be more executive actions to come.

“These actions are just the start of our work,” Klain wrote. “Much more will need to be done … But by February 1, America will be moving in the right direction on all four of these challenges — and more — thanks to President-elect Joe Biden’s leadership.”

What Biden plans to do in his first 10 days

The president-elect’s list of planned executive actions is both “partly substantive and partly symbolic,” as the New York Times’s Michael Shear and Peter Baker put it.

Some of the measures, like extending restrictions on evictions, will impact millions of people who are out of work and unable to pay rent due to the coronavirus pandemic, as Vox’s Jerusalem Demsas explained in December.

Congress extended the federal eviction moratorium through the end of January in its most recent Covid relief package, which Trump signed into law in December, but the pandemic isn’t close to being over — and in lieu of large-scale rent relief from Congress, which Biden has also proposed, extending the eviction freeze is an important step to prevent the crisis from growing even worse for as many as 40 million Americans.

Biden’s plan to require mask wearing on federal land, meanwhile, is considered more symbolic, as his authority to impose a broader mandate is limited. The memo does describe the proposed rule as part of Biden’s “100 Day Masking Challenge,” which includes working with state and local officials to “implement mask mandates in their towns, cities, and states.”

On his first day in office, Biden will also reverse Trump’s 2017 decision to withdraw from the Paris climate agreement and put an end to Trump’s travel ban, which has targeted primarily Muslim-majority countries (as well as Venezuela and North Korea) and suffered a string of court defeats early in Trump’s presidency.

In addition to rejoining the Paris accord, Biden promised in December to “[convene] the leaders of major economies for a climate summit within my first 100 days in office” and reaffirmed plans to “put the country on a sustainable path to achieve net-zero emissions no later than 2050.”

All told, Klain’s memo says Biden will take “roughly a dozen actions” on his first day in office to “make government function for the people.”

“President-elect Biden will demonstrate that America is back and take action to restore America’s place in the world,” Klain said.

For as much ground as the memo covers, however, there is at least one notable absence on the executive action front. Specifically, there’s no mention of the World Health Organization, which Biden has previously pledged to reenter “on my first day as President.”

Trump formally notified the United Nations that the US would withdraw from the organization in July last year, accusing it of favoring China and mishandling the coronavirus pandemic, but that withdrawal has yet to take effect, leaving Biden a window of time to quickly rejoin the agency.

Early in the Biden presidential transition, his team was staring down the possibility of a presidency without unified control of government, which would have left executive action as one of the primary levers of power available to him.

Following a pair of Democratic victories in two Georgia Senate races this month, however, things are looking somewhat brighter for Biden’s legislative agenda. With Sens.-elect Jon Ossoff and Raphael Warnock in the chamber, each party will have 50 votes — and once Vice President-elect Kamala Harris becomes the tie-breaking vote on January 20, Democrats will have the majority.

Though such a slim margin won’t make things easy for Biden, particularly as moderate Democrats like West Virginia Sen. Joe Manchin continue to oppose ending the filibuster, it does mean that Biden’s agenda has a real chance.

With the filibuster rule in place, legislation requires a filibuster-proof 60-vote majority to pass the Senate, meaning that Biden and Senate Democrats will need to win Republican support for their agenda — or pursue some policies through an obscure Senate loophole known as “budget reconciliation” that allows certain legislation that primarily affects taxes and spending to pass with a simple majority. (Vox’s Dylan Matthews explains in-depth what Biden can accomplish with this method — including actions that could “transform American life dramatically.”)

But Biden’s ambitions are larger than those policies he could pass without GOP support. According to Klain’s Saturday memo, Biden will push Congress to act on a day-one immigration bill, a recovery and jobs plan, and “legislation related to voting rights, the minimum wage, combatting violence against women, and more.”

Already this week, Biden proposed a $1.9 trillion economic stimulus and Covid-19 relief plan — which he has described as “a bridge toward economic recovery” — that calls for $400 billion in funding for the US coronavirus response and $1 trillion in direct relief.

We need to tackle the public health and economic crises we’re facing head-on. That’s why today, I’m announcing my American Rescue Plan. Together we’ll change the course of the pandemic, build a bridge toward economic recovery, and invest in racial justice. https://t.co/UzGFZY7Jhp

The same plan would also hike the federal minimum wage to $15 per hour and expand the child tax credit, among a slew of other actions.

Details also emerged this week about Biden’s immigration plan, which if passed would create a path to citizenship for more than 11 million undocumented immigrants and an expedited path for DREAMers, recipients of Temporary Protected Status, and essential workers. The plan is ambitious — but like Biden’s Covid relief plan, narrow margins in the Senate could make it difficult to pass.

As the memo outlines, though, Biden isn’t planning to put all his eggs in one basket. His legislative priorities will be accompanied by quick executive action.

“President-elect Biden will take action,” Klain said in his Saturday memo, “not just to reverse the gravest damages of the Trump administration — but also to start moving our country forward.”

A proposed anti-trans rule would let homeless shelters judge who’s a woman
How trucker country music became a ’70s fad
Alex Trebek is prepared to say goodbye to Jeopardy. But hopefully not for a while.
Vox Sentences: 700,000 people are about to lose food stamps
The FDA has officially raised the age to buy tobacco products to 21
Facebook canceled a major annual tech conference because of coronavirus. It’s not alone.