How Biden — or Trump — could win 270 electoral votes 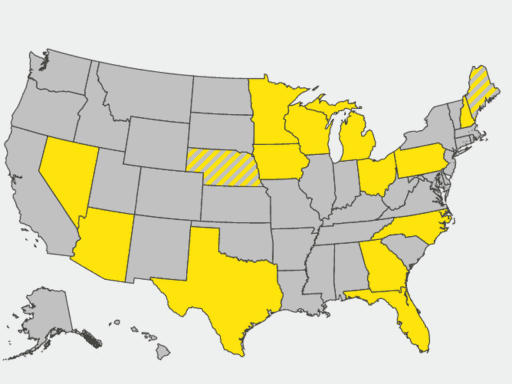 Here are the most promising paths to victory for each candidate.

The question of whether President Donald Trump will be reelected isn’t really up to the whole country.

Joe Biden currently has a pretty big lead in national polls. But due to the magic of the Electoral College system, the margins in a limited number of key states that happen to be politically divided will determine whether it’s Trump or Biden who’s sworn in on January 20, 2021 — or whether, if the outcome is much closer, we head toward a national crisis.

If Biden wins big enough in enough swing states, he’ll likely be able to beat back any attempt from Trump to question or contest the results. As conservative commentator Hugh Hewitt once wrote in a different context, “If it’s not close, they can’t cheat.”

But if the Electoral College margin is much closer — for instance, able to be swung by one very close state — expect recounts, legal challenges, and a tense situation.

So the Electoral College map and math are very important. There are 14 states and two congressional districts that the Trump and Biden campaigns need to keep an eye on. You can think of them in four groups.

The big six swing states: Michigan, Wisconsin, Pennsylvania, Arizona, Florida, and North Carolina are the states that are viewed as most likely to determine the outcome.

The states Trump is trying to defend: Ohio, Iowa, Georgia, and Texas probably won’t be the tipping point states, but if they flip to Biden, it likely means he’s winning big.

The states Biden is trying to defend: Nevada, New Hampshire, Minnesota, and Maine are all lean Biden states where Trump hopes to make gains.

I’ll run through all these groups below, and explain the various paths to victory for both Biden and Trump — and the paths to a much less certain outcome.

These are six key states that have gotten by far the most attention from the campaigns and election analysts. NPR reported that almost 85 percent of ad spending from presidential campaigns and outside groups has been focused on these states.

These states matter so much because they’re all medium to big, and they’re pretty evenly divided politically. Four of them — Michigan, Wisconsin, Pennsylvania, and Florida — were won by Barack Obama in 2012 but Donald Trump in 2016. North Carolina went for Obama in 2008 but for Republicans in the two elections since. And Arizona has voted for Republicans for decades but has been trending Democratic in recent years.

Eking out a small margin of victory in most of these states can give a candidate a massive Electoral College payoff — as Trump discovered in 2016, when he won all six; he won three of those by less than a percentage point.

Recent polling shows some separation among these “big six” states.

So if the current polls are right on and Biden wins all these states, he’ll clearly have won the presidency. But if the race tightens or if Trump overperforms polls, small margins in these six states will likely determine the winner.

To get to his magic number, then, Trump likely has to win Florida and three more of the states in this group — most plausibly North Carolina, Pennsylvania, and Arizona.

Biden, meanwhile, could reach his own magic number by winning Florida plus any one of the remaining five states in this group (assuming he has no surprising losses elsewhere). In the below example map, he wins Florida plus just Wisconsin (which has the fewest electoral votes of these states):

Another path for Biden, which doesn’t rely on Florida or North Carolina, would be through winning just Wisconsin, Michigan, and Pennsylvania — flipping back those states Trump so closely won in 2016:

There’s also the scary possibility of the Electoral College tie — which would occur if Trump wins Florida, North Carolina, and Pennsylvania, while Biden wins Michigan, Wisconsin, and Arizona, and every other result from 2016 is the same:

The two swing congressional districts: ME-2 and NE-2

Another quirk in the Electoral College system is that just two small states — Maine and Nebraska — have made the unusual decision to allot some of their electoral votes to the winners in each congressional district in the state, rather than giving them all to the statewide winner as the other 48 states do.

With just one electoral vote at stake for each, they’ll only actually matter in the closest of races. But if such a close contest transpires, they’ll be absolutely crucial. For instance, the 269-269 tie map above would flip to Biden if he was able to win Nebraska’s Second District.

Maine’s Second is rural, and white voters lacking college degrees make up a large share of the electorate. Its result in presidential years had always been the same as Maine’s statewide result — until 2016, when Trump won it by the sizable margin of 10 points (while losing the state by 3). Recent polls have showed Biden with a narrow lead there this year.

As for Nebraska’s Second District, encompassing Omaha, Barack Obama actually won a previous version of it in 2008. Nebraska Republicans responded during the next redistricting by moving some Democratic voters out of the district, so Republicans won it in 2012 and 2016. But polls show Biden doing well there this time around, as education polarization continues (both college-educated white voters and minority voters make up significant chunks of the electorate in this urban district).

The states Trump must defend

Beyond the core big six swing states and the two weird congressional districts, each candidate is trying to go on offense in a set of states where they suspect their opponent is favored but hope for an upset.

For Biden, the states he’s trying to pluck out of Trump’s hands are the traditional swing states of Ohio and Iowa, and the recently Republican-leaning states of Georgia and Texas.

We can think of this group as two pairs of states: two Biden is trying to win back, and two that are relatively new territory for Democrats to be contesting.

It’s generally believed that these states are unlikely to be decisive, since if Biden wins one of these states, he’s probably won enough states from the big six as well.

But weird things can happen. Here, for instance, is an (admittedly very unlikely) map where Trump holds strong in the Upper Midwest and Rust Belt (winning Michigan, Wisconsin, and Pennsylvania), and wins Florida and North Carolina — but Biden wins the election, because surprisingly high turnout among Mexican American voters delivers him narrow victories in Arizona and Texas.

The states Biden must defend

There are also a few states that Biden can’t quite take for granted just yet: most notably Nevada and New Hampshire, but it’s probably best to keep an eye on Minnesota and Maine as well.

For New Hampshire (4 EVs) and Nevada (6 EVs), polls actually show these two states about as close as Wisconsin and Michigan right now. But since they’re smaller, they’re less likely to be decisive in the Electoral College math — except, of course, in a very close outcome.

Minnesota (10 EVs) and Maine (2 EVs for statewide winner), meanwhile, do not look all that competitive in recent polling — polling averages show Biden up 8 to 9 points in Minnesota, and 15 points in Maine.

Still, they’re worth a mention because Trump did surprisingly well in both states in 2016 2016 (Clinton won Minnesota by just 1.5 percentage points and Maine by 3), and polls in both states missed the mark.

“The stakes are life and death”: Addiction treatment’s Covid-19 challenge