How Biden’s stimulus bill could actually build back better 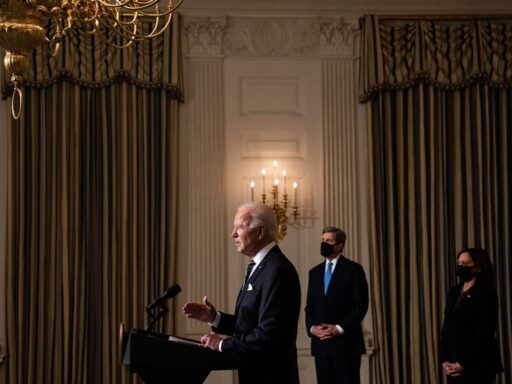 The economic relief bill should address the current crisis — but it can try to mitigate the next crisis, too.

As President Joe Biden and Democrats in Congress gear up to pass an economic relief package, their most pressing task is addressing the recession. But some economists and activists are hoping Biden and other lawmakers will also take a longer view.

The Covid-19 recession has revealed many structural problems in the economy. Vast socioeconomic and racial inequality. Insufficient support for parents, who have been asked to do much more as schools and child care close down. Low-wage workers deemed “essential” are paid very little while being asked to risk their health and lives to do their jobs.

All of these problems preceded the pandemic, but Covid-19 magnified them.

So some experts and advocates have called for an economic relief package to do more than just provide crucial temporary aid, including:

1) More automatic stabilizers. When the economy gets bad, Congress boosts several existing programs, like unemployment insurance, or creates new ones to offer relief. But what if this were more automatic? So when the economy hits a set low point — say, an unemployment rate of 7.5 percent — programs like unemployment insurance or food stamps would be increased without Congress needing to pass another bill. This could be done based on regional statistics, so Mississippi could get a boost even if California doesn’t need one.

Congress has proven the need for this kind of policy in the last year. After passing a big stimulus package in the spring, federal lawmakers didn’t follow up until late December, letting programs propping up the economy expire and dealing another blow to the people already hurting most from the recession.

In the future, automatic stabilizers could help recession-proof the economy. As Claire Guzdar of the progressive Groundwork Collaborative told me, “There’s no reason to be reactive to every economic crisis.”

2) A child allowance. In most wealthy countries, the government simply gives parents money. The closest equivalent in the US, the child tax credit, is limited in key ways — one of them being that parents who make too little to owe income taxes don’t get the full benefit. This contributes to the very high cost of parenting in the US.

One way to fix this would be to make the tax credit fully refundable, meaning parents could get help even if they make no money at all. Or the government could just make it an allowance, sending parents money on a monthly basis. By some estimates, doing this and boosting the benefit to at least $3,000 a year could help cut child poverty in the US by half.

3) Raise the minimum wage. This one is pretty straightforward: A stimulus bill could raise the minimum wage to $15 an hour. While there are concerns this could kill jobs (as employers cut openings to balance out higher wages), more recent evidence suggests the impact of a higher minimum wage on employment would be small.

All of these ideas have a common theme: They make sure that the economic recovery can lift up the people who have historically been left behind.

And these ideas are getting some serious attention. Biden’s plan repeatedly mentions setting up automatic stabilizers. He expands on the child tax credit (though only for one year), and congressional Democrats apparently want to go bolder. He also proposes raising the minimum wage.

The question now is if Congress can get any of this done. Not all of these ideas can likely pass without Republican support in the Senate. Biden’s proposal also has a price tag of $1.9 trillion; more moderate lawmakers have already expressed some concerns about that cost.

If the moderates’ concerns hold, future-minded items that add to the cost of the bill could get squeezed out — repeating the current cycle the next time the economy falters.

Photos: Where was Trump — and who was he with — before testing positive for the coronavirus?
The Supreme Court is about to hit an undemocratic milestone
Trump made a rare public appearance in DC to pay his respects to RBG. It did not go well.
Newsmax just canceled MyPillow’s Mike Lindell live on air
Nancy Pelosi embraces the “enthusiasm” behind the Green New Deal
One company thriving in the pandemic? Bath & Body Works.