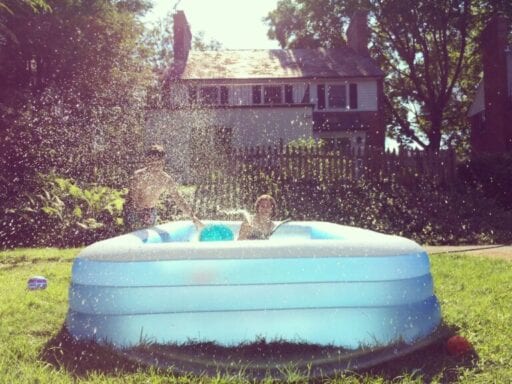 Activity boxes and inflatable pools replace summer camp and trips to the beach.

In early March, as fears about the coronavirus mounted across the US, Swimply — a swimming-pool-sharing startup that’s sort of like an aquatic Airbnb — saw its business slow to a trickle. Around 20 percent of its 3,300 hosts paused bookings, and the company was forced to hit the brakes on a “pretty significant” funding round it had planned to close before the summer, says Asher Weinberger, Swimply’s co-founder and chief marketing officer.

Just as the team started to regroup and figure out a plan for the crisis, however, the trend reversed course and bookings began flooding in.

“People were reaching out and saying, ‘Hey, I’ve been stuck at home with my kids for the last three weeks. I need something to do.’ Or, ‘Hey, I’m on a swim team and we have nowhere to go and we have to practice,’” he recalls.

Between February and March, the app saw a 1,200 percent increase in bookings — a jump that the company soon realized had as much to do with Covid-19 restrictions as it did rising temperatures in the hotter parts of the country. With public pools closed and private training facilities off-limits, renting a neighbor’s backyard pool for an hour or two has emerged as a welcome relief for stir-crazy families, competitive swimmers, and apartment dwellers who have spent months cooped up indoors (coronavirus is not known to spread through water).

Summer 2020 will be unlike any we’ve known before

In ways we’re still discovering, summer 2020 will be unlike any we’ve known before. The long days and shimmering heat are already here, but most of the activities they usually portend have been erased from our calendars: weekends at the beach (sans social distancing), summer camp, sports games, international vacations, county fairs, music festivals — as crowds go, so go America’s summer plans.

While this new reality has been devastating to a wide swath of the economy, some companies are discovering that it actually presents an opportunity — albeit one that founders are reluctant to celebrate given the pandemic’s human toll. As millions of people prepare for a season of small outdoor gatherings and staying close to home, they’re spending their money on products and services that promise to make the experience more enjoyable (or, at the very least, bearable).

Sales of backyard amenities like aboveground pools, trampolines, and patio furniture have spiked to the point that some enterprising sellers are scalping inflatable pools as if they’re concert tickets. Gardening supplies and egg-laying chickens are becoming hard to find as people search for both new hobbies and reliable alternatives to bare grocery shelves. Anything that keeps kids entertained — and offers parents a chance to take Zoom calls in peace — is, predictably, flying off the shelves.

Private boats and pools are keeping the sharing economy afloat

As the first heat waves of the season arrive, the need for a safe place to swim is only increasing. And while using a stranger’s pool may seem risky, Weinberger says hosts have gone above and beyond with cleaning precautions, and the platform will remove any users reported for infractions. (As for bathrooms, about 65 percent of hosts offer access, while those that don’t typically get short bookings from swimmers that live nearby.)

Further, he points to the Centers for Disease Control and Prevention’s guidelines that state there’s no evidence that Covid-19 can be transmitted through bodies of water, and that standard pool chemicals like chlorine should inactivate the virus. Crowds and unclean surfaces are, however, potentially problematic, according to the CDC — and both are easier to avoid in a private setting.

Name a better place to get some work done. We’ll wait.

“Even when they do open up water parks or public pools or gyms, are you going to want to go [right away]?” he says.

For now, Swimply’s biggest hurdle is that demand outpaces supply by a factor of four — though that may change as more people with backyard pools look for ways to make up for lost income during the pandemic. Swimply is in 39 states, as well as Canada and Australia, and the rates hosts can charge largely depend on where they’re located. In regions with high concentrations of pools, such as Scottsdale, Arizona, the going rate tends to be around $35 to $40 an hour, whereas in the New York area, hosts can charge $50 to $100 easily, says Weinberger.

Because the company noticed so many users requesting amenities like basketball courts and tennis courts, it’s also now launching a standalone app called Joyspace to accommodate these types of rentals.

For those with a marina nearby and cash to spare, boat rentals are an increasingly popular option. Boatsetter, a peer-to-peer boat rental marketplace founded in 2012, saw a 40 percent year-over-year spike in bookings in May, according to CEO and co-founder Jackie Baumgarten. While large parties may be off the table for now, many users are now seeking out options for family fishing trips and small group excursions.

Yards are the hottest destination in town

Consumers’ newfound domesticity means many people are, perhaps for the first time, getting very interested in their lawns. For the direct-to-consumer lawn care startup Sunday, that’s great news; the products it offers are personalized to each customer and less chemical-intensive than the major brands at Lowe’s or Home Depot.

According to CEO and founder Coulter Lewis, Sunday has doubled its projected sales even with a very aggressive plan for growth this year. It’s also seeing a significant uptick in engagement through its customer support channels — a phenomenon many companies are experiencing during the pandemic.

“We’re hearing people, for one thing, digging in way, way more than they were in the past and wanting to geek out on their lawn and learn about it,” he says. “Like, ‘What is this thing here? Why is that spot dead? Do you think it’s because of this?’”

While most of America’s 90 million homes have lawns, Lewis has learned from countless conversations with homeowners that most people know next to nothing about lawn care.

“There’s an assumption that if you’re a guy, you’re supposed to know this, which is insane. Or when you buy a house you kind of just know these things — that doesn’t happen either,” he says.

As such, people tend to default to traditional pesticide-heavy products, fueling a $48 billion-a-year DIY lawn and landscaping industry. Sunday’s annual lawn plan starts at $109 and includes three shipments of nutrients customized to each individual lawn using soil samples, climate data, and aerial imagery. Its customer base skews more toward the middle of the country than the typical VC-funded consumer startup (its biggest market is Texas, though it serves all 50 states), and 75 percent have kids and/or pets.

While Lewis expects that some of the company’s new customers will remain just as enthusiastic about particulars of lawn science even after lockdown restrictions end, for now, he’s more focused on the role the company has unexpectedly found itself playing in people’s lives.

“As a business, we think a lot about moments,” he says. “For us, that’s being outside, being in your backyard, caring for your lawn … [and] saying, ‘I know what I’m doing and why, and it’s going to look better. It’s going to get healthier.’ That feels like a good moment to deliver right now.”

Of course, healthy grass is just the start: Backyard add-ons like patio furniture, outdoor grills, hammocks, pools, and hot tubs have also gotten a boost during the pandemic. Bed Bath & Beyond’s online outdoor furniture and patio sales rose about 88 percent in the last two weeks of April and first two weeks of May, according to Joe Hartsig, the company’s executive vice president and chief merchandising officer.

Amazon, whose dominance has only grown in recent months as other retailers have closed stores, is also seeing the impact of this surge. According to the e-commerce analytics company Profitero, Amazon keyword searches for “badminton sets for backyards” spiked 7,060% for the week ending May 16 over the same period last year, while those for “inflatable pool” jumped 1,404 percent.

The latter, at least, have been just as popular among people who don’t have a “yard” so much as a rooftop, sidewalk, or nearby alleyway.

“We see a lot of parking-lot pools,” Emily Vaca, founder of the inflatable pool startup Minnidip, told the Los Angeles Times. “People are using them everywhere.”

The company sold out of its whole summer’s worth of stock in four days in April, and is expecting a restock at the end of June.

When lockdowns began rolling out across the country, KiwiCo founder Sandra Oh Lin realized that parents would be searching for new ways to entertain their kids. The company, which delivers monthly activity crates for kids, put together an online hub of at-home activities, tips from teachers, and other resources geared toward families. The free content was a hit, and as summer approached, the team turned its attention to the months ahead.

“We thought, ‘What else can we do to really help parents and kids during a summer that unfortunately for many of us is not going to be filled with the same types of things that we’ve had in summer before or what we have planned?’” says Lin.

What they came up with was Camp KiwiCo, a series of four sessions for kids from preschool to middle school, each revolving around a theme — from becoming a world citizen (ages 6 to 11) to engineering basics (ages 9 and up). Five days of video, printable, and online programming content for each age group will be available free beginning June 22, but for the full experience, activity crates will run parents $24.95 each or $99.95 for the week.

With so many people at home looking for ways to keep their kids engaged in something other than a screen, the company has found that its best marketing channel has been word of mouth. “We’re in a really fortunate position where we’re able to offer something that does keep kids entertained and busy and the parents can feel good about it, too,” says Lin. “I think that combination is something that’s compelling these days, and so we’ve just seen some really nice responses.”

As for spooky stories to tell by the campfire … well, have you heard the one about the murder hornets?

Catastrophe’s final scene is perfect
The economy shrunk at the fastest pace since the Great Recession
Elizabeth Warren is the favored VP pick among Democrats, poll shows
Pam Bondi’s been a punchline during the impeachment trial. But her role speaks to something importan...
How US schools punish Black kids
Biden wants to raise corporate taxes. He might need the world’s help.