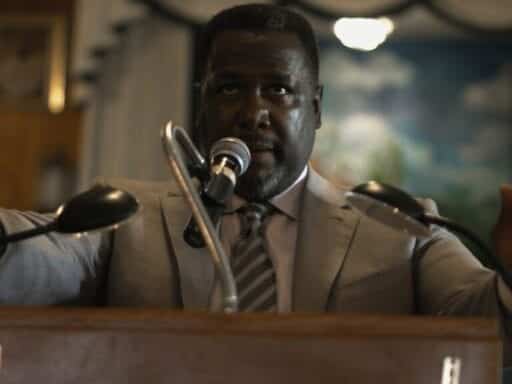 Phillip Youmans shot the movie the summer before his senior year of high school — and made one of the year’s breakout indies.

Few 19-year-old directors get a movie into a major film festival; even fewer come away with acclaim and distributions for their feature. But Philip Youmans pulled it off with Burning Cane, a stunning, bleak, intimate portrait of life in a southern black Baptist community — a movie he shot in his native Louisiana while still in high school.

Burning Cane is about a woman named Helen (Karen Kaia Livers) who struggles to understand how best to love and help both her alcoholic son Daniel (Dominique McClellan) and the alcoholic minister of her church, Pastor Tillman (an excellent Wendell Pierce) in the midst of her own life’s struggles. Through Helen’s eyes, we see the pain felt by women, men, and children of a life hemmed in by overbearing religion and by a kind of masculinity that makes no one stronger.

And it’s an unusually mature film, particularly for a first feature from a still-teenaged director. After winning the top prize at its Tribeca Film Festival debut in April, Burning Cane was acquired for distribution by Ava DuVernay’s company Array, and is currently in select theaters and streaming on Netflix.

I spoke with Youmans by phone about making a movie on a shoestring budget, what he was hoping to say about religious communities and the ways he’s struggled with outrunning toxicity in his own relationships.

You’re an unusual director, and this is an unusual project. How did you get started with it?

I first wrote a short film called The Glory. I wanted to have a conversation about my upbringing in the church. I was raised in a Baptist church, and by [the time I was writing the short film] it was a very, very, very relevant conversation for me, specifically because I’d been going in and out of my God-fearing times, for lack of better words. I’ve been questioning my faith for a while. I was having a conversation with my own faith, and then also wanting to put that on a set and make something.

Initially I brought that short film to my professor at the New Orleans Center for Creative Arts, Isaac Webb. He was the first person who told me that I could make it a feature. That was an encouraging thing for me, because Mr. Webb had already made a feature, and he believed it was possible for me. He’s an amazing dude that I think is really, really about promoting the work of the students in an unselfish way. He has the best intentions for his students.

So when he told me that it felt like there was a real possibility there, I started to go through the motions of what it meant to be prepping for the feature — trying to raise money, expanding it to the feature length, et cetera.

What did prepping a feature like this entail for you, especially being a young director without a big production company behind you?

My producer Mose Mayer and I started an Indiegogo. I set aside all of my savings at that point for the film. We never really had a ton of flexible funding in production — we had barely enough, and the rest of it we had to account for through favors.

To me, the production process was defined by running through script revision, reading through actors, consolidating that path. This was moving at such a quick pace, because it was kind of a now-or-never scenario. In truth, if the bulk of principal photography had to move into my senior year, then I think it would have been even less likely that the movie would come to fruition. Because getting people to buy in for a consistent number of weekends is, at least in my eyes, logistically more difficult than getting them to consolidate a chunk of time in the summer. Especially because most of my crew were also students — high school students — and that did matter in terms of the available time that we would have.

After I realized I wanted to make the feature, I went to my producer Mose Mayer’s house. He was sitting by the pool — I remember it so vividly — and we were talking about what it would mean to really dig in and make a feature. It came to, We’re going to do this. We’re going to go full into it. And from that point on, we were running through the traditional pre-production, without the resources that are traditionally allocated to that stage of production.

I always wonder whether those kinds of restrictions of time and resources result in worse art, or if they actually make more space for creative thinking and art making.

I think it’s so true. And it’s good to have to rely on the community, on people’s good will. It builds so much heart and grit into a project inherently, no matter what you’re shooting.

We felt like we were underdogs, the entire road through — at least I did. Especially going into Tribeca [Film Festival], because I knew we probably had the lowest budget of any feature that was in our [festival competition] category. It felt like the world was stacked against us, but also holding our hand. It was so weird.

That seems like it might not be a bad place to start a career. If you can do this well with so little, then what can you do with a little more?

Or with a lot. Yes. Last weekend, I shot a music video for the first time ever. I used a real DP (director of photography). It was the first time that I ever really worked with a full crew, and a real dedicated DP.

Honestly, it was the least worrying I’ve ever had to do. And it’s kind of weird. Not having to, or even being expected to, stay after set, or clean out our department, or sweep the floor’s location, or all that kind of stuff. There was no time on Burning Cane that anyone could say, Oh, that’s not my job. So it’s weird to experience that change, to have my sole focus on set be just directing: observing what’s on frame, seeing how closely it relates to the vision I have, and being a conscious observer.

Your vision is pretty clear in Burning Cane — it’s unusually visually striking, and often the images provoke a tone and a feeling more than just convey a narrative. How did you come at the film with that in your mind?

First, I wanted to talk about how easily vices, like alcohol and smoking, can be passed down in that world. Because that’s kind of the story of my family. And second, even more, I wanted to explore toxic masculinity.

I’ve always been … if I’m being honest, I’ve always been kind of a jealous, insecure person in relationships. And a lot of times I kind of sabotage them. I feel like jealousy is a cancer, and once it starts, it just keeps getting fed and fed by itself. I’ve always been aware that in truth, unless you’re in a relationship with somebody who exploits and tries to capitalize on your jealous tendencies, then a lot of that is really just insecurity.

So Burning Cane is partly about having a conversation about toxic masculinity, the jealousy, the insecurities, all that pressuring. I wanted to talk about that specifically, and also the dangers of enacting and following a fundamental interpretation of religion — particularly when you’re following a leader. [Ministers in] that religious community have such a mayoral and even seemingly infallible status to the congregation. But they can also be misled by ambition, or even malicious motives.

So what are you taking away from this experience, both personally and professionally?

One thing I think is going to be a throughline for all of my work — I was trying to create a nuanced, humanizing portrait of black life and black experiences. Even if the commentary is bleak, I still want it to come from an honest, nonjudgmental perspective.

Making Burning Cane, I got a lot of validation of my own artistic instincts, and started feeling like maybe they’re good enough. I think sometimes it’s easy to be discouraged about your own creative voice. I’ve never been confident in my instincts as a director and as a creative, as an artist, as I am now, probably because I’ve gotten a lot of feedback.

But I do have to say that Burning Cane has resonated with people. It’s validating for me that my voice, my intentions, my instincts as an artist are good enough to exist within this whole ecosystem.

In terms of church … I think it’s helped me. I used to be so outward and unabashed with [my critiques]. I used to just be kind of rude about it. My mother would still bring us to church, and I would come home and shout about all the differences that I had. How I didn’t understand why the pastor would have people waving their envelopes when they donated, making other people feel ashamed about not being able to donate. Or I didn’t understand why there was so much anti-gay rhetoric going around while there were people — and they knew damn well — in the congregation who were gay, but they directly associated being gay with the devil. I would ask and never really get any clear answers. So I was very rude about it.

But my mother is still a Christian to this day, and still regularly attends church. And I think our discussions come from a much softer kind of place now, at least for me, because I recognize that the end of the day I can only account for myself and my own conviction. But I can’t tell anybody in my family, and I really had no right to tell them, what they shouldn’t believe or what they should follow. I can only really follow my own instincts and my own job and live my own truth.

I think with Burning Cane, I definitely did get a more mature perspective on religion, trying to really dig into why people sort of congregate towards faith in the first place. I don’t really have any license to judge them or to really be as wild with saying how much I disagree with the doctrine. I feel like it didn’t really help anything, and those discussions never really went anywhere. My beliefs and differences still remain, but I think this film did help me approach it in a more sort of understanding, nuanced way that didn’t come to conclusions right off the jump and really wasn’t preaching at people instead of listening.

Burning Cane opened in select theaters on November 1 and is streaming on Netflix.

This conversation has been edited and condensed for clarity.

The Trump administration just backed down on its attempt to kick out foreign students
Coronavirus isn’t transphobic. But America’s economic and health systems are.
GOP lawmakers react to Trump-Putin summit: lots of condemnation, few concrete plans
The controversy over a Washington Post reporter’s Kobe Bryant tweets, explained
Why North and South Dakota are suffering the worst Covid-19 epidemics in the US
The lesson Democrats should take from Florida’s $15 minimum wage vote