How Congress can permanently disqualify Trump from office after impeachment 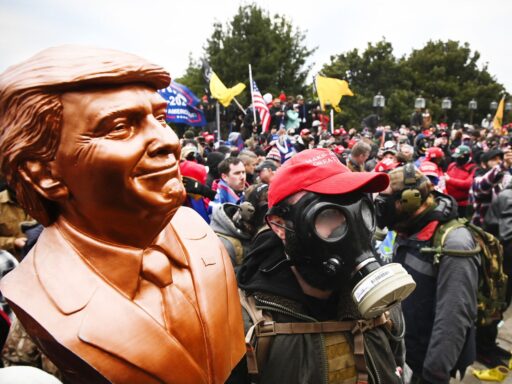 The impeachment process to prevent Trump from running in 2024, explained.

Friday morning, Assistant House Speaker Katherine Clark (D-MA) told CNN’s John Berman that the House will hold an impeachment vote on President Donald Trump by the middle of next week.

As we learned the last time Trump was impeached, merely impeaching him is not enough to remove him from office. The House can charge Trump with a removable offense by a simple majority vote, but he must be convicted by the Senate by a two-thirds vote. Even if Trump is convicted — an unlikely event given that Republicans have half the Senate’s seats — impeachment could only cut Trump’s time in office short by a few days. Biden will take office at noon on January 20.

So why would lawmakers bother with impeachment? One answer is that removal is not the only sanction available if Trump is convicted: The Constitution also permits the Senate to permanently disqualify Trump from holding “any office of honor, trust or profit under the United States.”

Impeachment is still very likely to hit a wall in the Senate, but there are vague reports that the Senate’s ability to permanently lock Trump out of power may make impeachment more attractive to congressional Republicans. On Wednesday night, while the memory of being forced out of the Capitol by an angry mob of Trump supporters was still fresh in the minds of lawmakers, Fox News’s John Roberts reported that there was “talk swirling” among Republicans in Congress about using the impeachment process to ensure that Trump cannot run for president again in 2024.

If Trump were to seek the presidency again in four years, he could be the prohibitive favorite in a Republican Party primary. A December Gallup poll shows that Trump has an 87 percent approval rating among Republicans, even though he is quite unpopular with the nation as a whole. Another December poll by Quinnipiac University found that 77 percent of Republicans believe the lie that Trump lost to Biden because of widespread voter fraud — a lie that Trump repeated even as his supporters wreaked havoc in the Capitol on Wednesday.

Disqualifying Trump from holding office, in other words, wouldn’t just eliminate the risk that America’s most prominent adversary of democracy would occupy the White House once again. It would also make way for other ambitious Republicans who hope to become president someday.

Though Congress has the power to remove public officials via impeachment, this power is rarely used. Including Trump, who was impeached in late 2019 for pressuring Ukraine to intervene in the 2020 election, only 20 officials (and only three presidents) have been impeached by the House in all of American history. And, of these 20 impeached individuals, only 11 were either convicted by the Senate or resigned their office after they were impeached.

The term “impeachment” refers to the House’s decision to charge a public official with “high crimes and misdemeanors,” the phrase the Constitution uses to describe offenses warranting removal of a high official. The House may impeach such an official by a simple majority vote.

After such a vote, the matter moves to the Senate, which will conduct a trial and decide whether to convict the impeached official (if the president is impeached, the Chief Justice of the United States shall preside over this trial). Convicting someone who is impeached requires a two-thirds majority vote in the Senate.

If the impeached official is convicted, the Senate then must decide what sanction to impose upon that official. Under the Constitution, “judgment in cases of impeachment shall not extend further than to removal from office, and disqualification to hold and enjoy any office of honor, trust or profit under the United States.” So the Senate effectively must decide whether merely removing the official from office is an appropriate sanction, or whether permanent disqualification is warranted.

Although the Congress may only remove and disqualify a public official, federal prosecutors may still bring criminal charges against that official in federal court.

In all of American history, only three individuals — former federal judges West Humphreys, Robert Archibald, and Thomas Porteous — have ever been permanently barred from holding future office.

To be clear, such a simple majority vote may only take place after the Senate has already voted to convict an impeached official. Two-thirds of the Senate must first agree to remove someone from office before that official can be disqualified — a simple majority cannot, acting on its own, disqualify an official from holding future offices.

It’s also worth nothing that the Supreme Court has not ruled on whether simple majority vote is sufficient to disqualify someone from public office after they’ve already been removed. Humphreys and Porteous were both disqualified in supermajority votes, and Archibald never brought a case before the Court that could have allowed the justices to rule on how many votes are required to disqualify a public official.

Nevertheless, there is a strong constitutional argument that the Senate should be allowed to disqualify an individual by a simple majority vote, after that individual has already been convinced by a 2/3s majority.

In criminal trials, defendants typically enjoy far fewer procedural protections during the sentencing phase of their trial than they do in the phase that determines their guilt or innocence. In non-capital trials, a defendant must be convicted by a jury, but the sentence can be handed down by a single judge.

A similar logic could be applied to impeachment trials. Before a public official is convicted by the Senate, they enjoy heightened procedural protections and must be found guilty by a supermajority vote. After they are convicted, however, they are stripped of those protections and their sentence may be determined by a simple majority of the Senate.

In any event, overcoming the hurdle of convicting Trump will be difficult. For the moment, Republicans still control the Senate — although Senators-elect Raphael Warnock (D-GA) and Jon Ossoff (D-GA) will make it a 50-50 Senate evenly between the two parties once they are sworn in, Georgia is not required to certify their electoral victories until January 22. And even if Warnock and Ossoff are able to vote on impeachment, Democrats would still need to convince at least 17 Republicans to convict Trump.

That will be a heavy lift, as Trump remains very popular among rank-and-file Trump voters. The question for Republican senators, however, is whether they want to risk having Trump as their standard bearer in 2024.

The Lost Year: Falling for your mailman in lockdown (but not getting the ending you wanted)
One Good Thing: Watching Gordon Ramsay’s Christmas special is one of my favorite holiday traditions
Is a high-ranking House Democrat about to lose his primary?
Top US Iran envoy: We will kill Soleimani’s successor if another American is murdered
Donald Trump, Jr.’s latest Joe Biden “joke” reflects a proven strategy for mainstreaming extreme ide...
The TikTok-Microsoft-Trump drama, explained