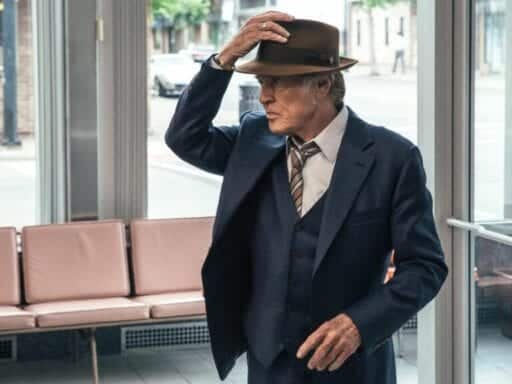 The writer and director of The Old Man & the Gun talks about his star, his offbeat influences, and why he keeps making movies about outlaws.

David Lowery’s newest film, The Old Man & the Gun, is a return to familiar material for the filmmaker. Almost a decade ago, his second feature film, Ain’t Them Bodies Saints, became a breakout critical hit at the Sundance Film Festival. A tale of romance and heartbreak between a couple (played by Rooney Mara and Casey Affleck) who seem modeled on iconic outlaws Bonnie and Clyde, the movie launched Lowery’s career.

It’s fitting that Sundance is where Lowery broke out, because that festival was founded by Robert Redford and named for the outlaw he played in his own 1969 breakout role, in Butch Cassidy and the Sundance Kid. And when Redford got interested in another outlaw — Forrest Tucker, the subject of a 2003 New Yorker article entitled “The Old Man and the Gun” — he decided to make a movie about Tucker and approached Lowery to direct the project.

Redford, now 82, also decided to make the film his farewell to the big screen, and it’s a fitting bookend to his on-screen career. Lowery took on writing and directing The Old Man & the Gun, which co-stars Sissy Spacek and Casey Affleck and comes out on September 28. With his poetic cinematic sensibility and proclivity for wistfully romantic stories, The Old Man & the Gun is a good fit for Lowery — and a terrific tribute to both Redford’s career and the American bank robber archetype.

Lowery and I spoke by phone about the surprising films he used as touch points when making this movie, how you write for a bona fide screen legend, and his mixed feelings about the criminal characters he’s written for his movies.

This interview has been edited for length and clarity.

So why are you so attracted to stories about thieves?

The clichéd response to that is that I love the idea of “getting away with it,” whether it’s in heist films or in my own life as a filmmaker who feels like he consistently has to get away with it.

But the more I use that answer, the more I wonder how much I actually agree with it. There’s something incredibly inappropriate with getting away with it, so I’m also like, “What am I saying whenever I say this?”

So it’s given me a lot of moral pause, so to speak, as I’ve trotted out my more rambunctious and fun-loving answer.

The films you’ve made about thieves seem to actually question whether the way we think about them — as being glamorous people who get away with things — is altogether good.

I don’t necessarily agree with the perspective that the characters in my films have! I don’t think that ultimately it is sustainable, or that they can get away with it. What that says about me whenever I transpose my own life choices onto these characters starts to seem somewhat grim. [Laughs]

So what got you interested in this project, then?

I really wanted to make a quintessential Robert Redford movie. That’s what this was always going to be, because this was a project that he brought to me. It was an article that he had optioned, a character he wanted to play. And he had seen Ain’t Them Bodies Saints and liked the idea of me taking a crack at it.

So his producing partner called me and asked me if I would sit down with them to talk about it. And of course, I said yes.

I read the article with him in mind. I saw Forrest Tucker as Robert Redford from day one.

So the goal from that first meeting was to craft a role that he could really sink his teeth into, but that would also honor the legacy of what he has done across many decades as one of the most iconic movie stars of all time.

What do you think attracted Redford to the story in the first place?

I think he really saw an opportunity to have fun onscreen. He had spent many years making very serious films that had a lot of political weight or dramatic weight to them. And he really wanted to have fun.

He also wanted to play a character that was a spiritual successor to some of the characters he’d played before. He definitely saw the lineage between the Sundance Kid and Forrest Tucker, or what he’d done in The Sting and Forrest Tucker. I think that appealed to him as well.

He definitely does not think about this movie as “a Robert Redford movie.” He thinks about it as the story of Forrest Tucker. And that’s his right to think that way!

But for me as a filmmaker, and for us as audience members, it’s impossible for us to separate who he is from the character he’s playing onscreen.

Did you find that challenging, as a director?

I found it more challenging as a writer! It was really tough to write the script. I first met with him five years ago. So the screenplay was in the works for a good solid four years before we started shooting it. Of course, in that time period I made two other movies, and I changed as a filmmaker as well.

It was really hard to figure out how to utilize who he is. For better or worse, he can never truly disappear into a character, because he has just been a movie star for so long. That’s my perspective as an audience member. I’m always somewhat tacitly aware that I’m watching Robert Redford play a character, and I enjoy that. I think that’s part of the appeal of who he is.

But it makes writing a part for him a little bit more challenging. You really have to tap into what makes him who he is in order to give him something that he can do his best with.

It wasn’t until we worked on Pete’s Dragon together [in which he played a minor role] that I really felt I was able to write the part for him specifically. So it was a great luxury to have the opportunity to work with him once in a smaller capacity before diving into this one.

What makes Redford the icon that he is?

I think it’s a combination of things. His looks — he is incredibly handsome. He’s got a marquee quality to his appearance that instantly makes you think, Oh, this guy should be seen, whether in photographs or in film. You can always feel the wheels turning behind his eyes. He’s got that very particular squint that makes you think he’s always second-guessing the situation he is in, or criticizing it, or just trying to figure out exactly what’s really going on.

There’s this sort of wily intelligence that is always there behind every performance that he gives that makes you feel like there’s more to him than just his good looks.

And his countercultural attitude, I think, plays a huge part in his appeal. He has always put himself in the place of being a cultural outlaw. He’s always tried to step a little bit outside the beaten path in the work he does as a filmmaker. Politically, as an environmentalist, he’s always standing up for the people who don’t have a voice, and he’s always championing causes that need to be championed. He’s always standing up to institutions. Something about that comes through in his performances. Over the years, it has become such a part of who he is: that outlaw mentality, that anti-institutionalism mentality.

Obviously that’s tied to the idea of these famous, iconic bank robbers and outlaws. As you’re writing this film for an icon, were you thinking about the icon of the bank robber as well, a character that’s been all over American cinema?

I definitely wanted this movie to engage with the archetype of the American outlaw, and specifically the bank robber. I think the two go hand-in-hand at this point. I felt that it would be a disservice to audiences if I made a movie that didn’t honor those traditions.

So rather than really dig into the true story of Forrest Tucker — rather than take the journalistic approach — I tried to take his life story and distill it down to the most familiar beats possible in a heist film. I tried to find that narrative throughline in his life story, and in particular, the two years that the movie focuses on. I wanted him to be the prototypical American outlaw.

As a result, it definitely pays homage to and engages with the idea of the outlaw in cinema. For better or worse, the heyday of those movies was in previous decades. And because this movie is also set in a previous decade, I felt that it needed to look as if it was made in a bygone era and that the archetype itself would work better if the movie felt like it was entirely cut from a cloth that was several decades old.

Did you have any touch-point films that you watched for inspiration?

Yeah, but they weren’t necessarily the expected ones.

Of course, I definitely watched lots of crime films, and went through everything from Heat to The Asphalt Jungle to Friends of Eddie Coyle. I really tried to ingrain all of those classics in my subconscious before we started making The Old Man & the Gun.

But the real touchstones that we talked about a lot in getting ready to make a film were more obscure, at least in terms of what you would think of for a bank robbery film. So the Jean-Pierre Melville film Le Samouraï was a touch point for us. Wes Anderson’s Fantastic Mr. Fox was a touch point — I often was like, “This needs to feel like Fantastic Mr. Fox, except live-action instead of animated.”

Robocop, oddly enough, was something we talked about a little bit. Chantal Akerman’s Golden Eighties was a movie that I just kept showing people the trailer for and being like, “This is the type of movie this needs to feel like.”

We never quite hit that, but nonetheless there was a little bit of it that showed up in the movie. Jacques Tati’s Playtime was something we talked about. All of these influences weren’t really crime movies — Le Samouraï definitely is, but we were pulling from so many other different bits of inspiration.

I’m always attracted to these characters because of their spirit. And yet I’m always trying to get away from what it is they do — the practical fact of them being criminals and police officers who are engaged in a chase of one another. I kept running afoul of that of necessity in writing this film. I kept trying to turn it into something other than a crime or bank robbery drama, because at the end of the day, it’s not my forte.

Oh, yeah. I never set out to make romantic movies, but all my films are deeply romantic and at this point I’m very aware of that. I don’t try to do it, but I always look forward to seeing how whatever it is I’m doing will turn into a romance at some point because it just inevitably always happens. So that is a good way to describe these movies: They’re romances. Everything I make is a romance. And I will likely not stop making those any time soon.

2 winners and 3 losers from the third night of the Republican National Convention
Vox Sentences: From Russia With Love
“People are not okay”: The mental health impact of the Trump era
We asked Joe Biden’s campaign 6 key questions about his climate change plans
There is no fall TV season anymore
Why Best Picture nominee Sound of Metal resonates