How Democrats can shut down the Senate part II: the majority strikes back 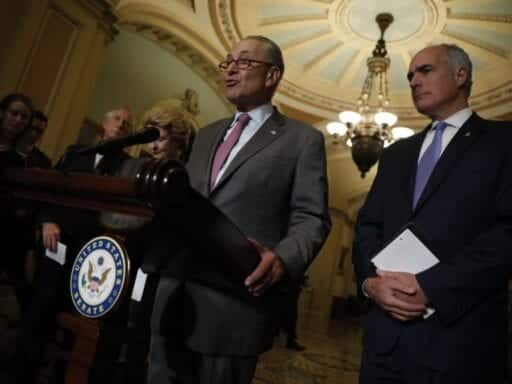 Quorum-breaking can be very disruptive but does not provide a long-term option for blocking a Supreme Court nomination.

In my June 20 explanation of how Democrats could break a quorum in the Senate, I made the point that Democrats could obtain more bargaining leverage over the Senate agenda by being more disruptive. I did not include fine details about how exactly one breaks quorums, or how the majority would respond.

Then Justice Anthony Kennedy announced his retirement, and my post attracted attention from progressives looking for some way — any way! — to keep President Donald Trump and the Senate Republicans from filling another seat on the Supreme Court.

As a follow-up, I intend to provide more detail about how quorum-breaking works, and how the majority party can overcome a quorum-breaking effort if it really wants to. Quorum-breaking can be very disruptive (my original point), but does not provide a long-term option for blocking a Supreme Court nomination.

A “quorum” is a sufficient number of people to make binding decisions for a group. Quorum requirements for legislatures vary widely, from two-thirds of the membership for the Texas legislature to about 6 percent (40 out of 650) for the UK House of Commons. Article 1, Section 5 of the US Constitution sets the quorum threshold for Congress at a simple majority, so 51 of 100 senators.

There is a long tradition of quorum-breaking in American legislatures, dating to before the Constitution. In recent state politics, both chambers of the Texas legislature fled the state in 2003, while Democrats fled Wisconsin and Indiana in 2011 to block anti-union legislation.

In Congress, the heyday of quorum-breaking was the late 19th century, as explained in my book, Filibustering. For the first century of congressional history, quorum-breaking (also known as a “disappearing quorum”) was increasingly common, and occurred more frequently in the House than the Senate.

I measured these attempts by identifying roll-call votes on which most members of one major party voted while most members of the other party did not vote, and this difference was statistically significant.

Of course, not every apparent attempt to break a quorum is successful. From the 1870s to the 1890s, quorums were much more likely to “disappear” in the Senate, leaving the chamber paralyzed.

Quorum-breaking continued on occasion in the 20th century, but senators tended to use dilatory motions and long speeches until the Senate shifted toward “invisible” filibusters in the 1960s. As discussed below, senators utilized disappearing quorums as recently as 1988.

The mechanics of quorum-breaking

How would a group of senators go about breaking a quorum?

First, they’d initiate a quorum call or a roll-call vote. This, of course, would require a Democrat to be in the chamber, and perhaps several other Democrats to support a request for a vote or quorum call.

Getting a vote on a procedural matter would require some rejecting unanimous consent agreements that preclude spontaneous roll-call votes and some preparation, perhaps in consultation with the Senate parliamentarian.

The most impressive example I have come across is former Sen. James Allen (Democrat from Alabama) resisting cloture reform in 1975 with a series of creative roll-call votes from February 24 to March 7. For example, on February 24, Allen made a multi-pronged motion to bring up a cloture reform resolution, raised a parliamentary objection to his own motion, and then moved to table his own appeal. He forced a roll-call vote by arguing with himself.

The rest of the disappearing quorum tactic is simple: The remaining senators do not come to the chamber, cast votes, or note their presence for a quorum. To make any policy decision, the majority party would have to provide enough members to furnish a quorum or resort to drastic tactics. If there is no quorum (as shown by a quorum call or roll-call vote), the only actions the Senate can take are to adjourn, to recess, or to compel absent members to come to the chamber.

Notably, this tactic would reduce the downside to Democrats of the Senate staying in session through August: Republicans would have to remain in Washington, DC, furnishing a quorum while Democratic senators up for reelection could go home and campaign.

My original point, however, is that quorum-breaking — or the threat of it — in the current environment would be disruptive enough to make the Senate Republicans more amenable to allowing roll-call votes on Democratic priorities, and without the complex safeguards that Senate Majority Leader Mitch McConnell usually places between the will of the Senate and the preferences of the Republican Party.

Or Democrats could use the threat of quorum-breaking to extort a promise from McConnell and Senate Judiciary Committee Chair Chuck Grassley that the Judiciary Committee will take no action on a Supreme Court nomination — no hearings, no background questionnaire — until President Trump has testified under oath with representatives of the Mueller investigation.

What quorum-breaking is not good for, however, is indefinitely blocking a high-priority measure like a Supreme Court nomination. There are classic responses to quorum-breaking that enable a determined majority to overcome the tactic.

If the Senate Democrats refused to participate in quorum calls or roll-call votes, here are five ways the Republicans could respond:

1) Instruct the sergeant-at-arms to request (first round) or compel (second round) absent senators to the chamber. This was done in 1988 to break a Republican filibuster when GOP senators were avoiding the Senate floor. (Here are more details on attendance).

2) Currently, the presiding officer of the Senate cannot count members who are present but not voting toward a quorum. (See page 14 here; and pages 1,051 to 1,052 and 1057 here.) But nonvoting senators can be asked to explain why they refuse to vote, and the Senate can then vote on whether to excuse the nonvoting senator. (See rule 12, section two here.)

After consulting with the Senate Historian’s office, I cannot find any rule or precedent regarding fining senators for not voting, or for absence. This has been done, though, in the House of Representatives, and was done in Texas in 2003 to end quorum-breaking.

3) However, McConnell and the GOP would likely make some incremental changes in how senators are counted so they can muster a quorum on key votes. There are historical precedents dating back to 1879 for and against allowing the presiding officer of the Senate to count nonvoting members toward a quorum.

4) The Senate’s cloture rule cuts both ways. On one hand, once cloture is invoked it provides protection against dilatory (a.k.a. delaying) motions, such as motions to adjourn. On the other hand, there is a mandatory quorum call before any cloture vote, which the minority party can avoid.

Cloture on most legislative matters, including many items on the summer agenda, requires three-fifths of the Senate. (By precedents set in 2013 and 2017, the cloture threshold for nominations is a simple majority.) Finally, votes on parliamentary disputes are still allowed after cloture is invoked and cannot be decided without a quorum voting.

5) In addition to parliamentary tactics, there would presumably be a political messaging war raging at the same time. Democrats could be criticized for taking advantage of Sen. John McCain’s (R-AZ) absence due to cancer, of refusing to do their job by not voting, or of being insufficiently “civil.”

For these reasons, I would expect that prolonged quorum-breaking would be politically costly, and that it matters what the Democrats are asking for. A short-term stoppage to obtain basic parliamentary fairness, or in defense of the rule of law, could be defensible. Shutting the Senate down indefinitely over a Supreme Court seat would almost certainly be a losing battle.

When will the economy be good again?
Boris Johnson just resigned over Brexit talks. Prime Minister Theresa May could be in trouble.
The Trump administration is challenging a court ruling that prevents it from ending the census early
Facebook is being fined $5 billion for privacy violations, and Wall Street thinks that’s great news
The longest lunar eclipse of the century is on July 27
The 20 Democrats running for president and everything else you should know about 2020