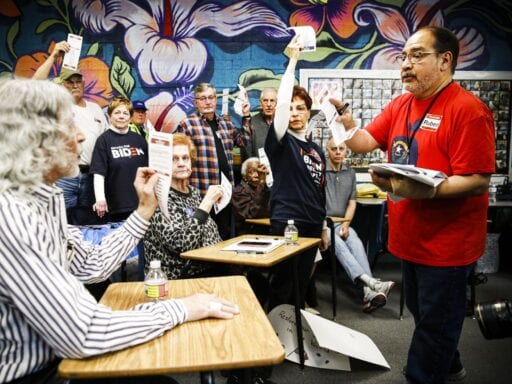 Small differences in the vote total could result in drastically different delegate hauls.

We all know how the Democratic nomination contest works, right? Well, we think we do.

People go and vote in primaries or caucuses in their states. The votes are counted and we see who wins. And then, those votes get translated … somehow … into how many delegates each candidate gets.

Even many hardened political obsessives tend to fast-forward through that last bit: the delegate math. It’s complicated and confusing, so why bother?

But the delegate math is incredibly important: It determines who wins. A candidate needs a majority of delegates to get the nomination at the Democratic National Convention. Bernie Sanders has recently argued that it shouldn’t be this way — that a plurality winner should just win — but that is not how the current rules work.

So how do you get delegates? In the Democratic contest, it’s not just about winning states, it’s about how much you win by and how much of the vote you get in both states and congressional districts. There are no winner-take-all states; instead, all delegates are awarded proportionally.

For instance, if the leading candidate gets 30 percent of the vote somewhere, they could end up getting around one-third of delegates at stake. But with the exact same vote share they could also end up with two-thirds of delegates — a dramatic difference, particularly since a majority is necessary to win.

The difference depends entirely on how many other candidates top 15 percent and on how far above it they are. Voters may not realize that, if they cast their ballot for a candidate who ends up falling below that threshold, they could be super-charging the leading candidate’s delegate haul.

So it’s very much worth understanding what happens when votes get converted into delegates. And happily, Democrats do at least use the exact same delegate allocation formula everywhere — meaning, once you learn how it works in one state, you’ll understand how it works everywhere. Let’s walk through it.

Four steps to get from votes to delegates

The best way to explain how this will all work is to walk you through a sample scenario based on the candidates currently in the race. Though these numbers are made up, remember that what happens in the examples below are all completely plausible outcomes on Super Tuesday.

Step 1: Meeting the threshold: Once the votes somewhere (either in a state or a congressional district) have come in, the first key crucial number in the delegate math is the 15 percent threshold.

As you probably know, candidates need 15 percent or more of the vote somewhere to be eligible to get any delegates there. If a candidate is below that, they’re out of luck.

But another crucial step here is that the votes for any candidates getting below 15 percent are then excluded from the count for the purposes of delegate allocation.

So let’s say the votes come in as follows (using nice clean numbers):

Four candidates have met the 15 percent threshold: Sanders, Biden, Warren, and Buttigieg. That means the votes for Klobuchar and the other candidates are excluded.

Step 2: Determining everyone’s delegate percentage: Next, we calculate how much of the remaining vote each candidate who met the threshold got. The resulting percentage (up to three decimal places) will be the key number for allocating delegates.

Step 3: Estimating the delegates for each candidate: Then, you have to look at how many delegates are actually at stake in this particular place. Let’s say there are 10 delegates at stake here. Apply the percentages to that, and this is what you get:

Step 4: Rounding: Delegates are actual people and can’t be split into fractions. So we need to end up with whole numbers here.

The way Democrats ensure this is they start with just the whole numbers (avoiding the decimals for now) — so Sanders gets 3, Biden 2, Warren 2, and Buttigieg 1.

That means 8 of the 10 delegates have been awarded and there are 2 left over. You look at the part of the number after the decimal point to determine who gets those. Biden’s .777 is the highest, so he gets one, and Buttigieg’s .666 is second highest, so he gets the other one.

The final delegate tally here, then, is:

So though Sanders got the most votes, he ended up tying Biden in delegates due to rounding, because Biden was close enough on his heels and rounding happened to work in his favor.

That’s how the delegate allocation formula works. You can apply it to the vote total in any state or congressional district with a primary to walk through how the delegates get divvied up.

In a two-candidate race like the ones Democrats had in 2008 and 2016, this isn’t all that tricky. Both candidates almost always top 15 percent and there are just a small number of votes for anyone else. So their percentage of delegates ends up closely matching their percentage of votes.

But when the vote is split among multiple candidates, things can get messier — because of that crucial 15 percent threshold.

As an example, let’s say the vote breakdown is only slightly different from the one above, with Bernie Sanders getting the exact same percentage of overall votes, but the rest of the field shaking out differently:

Applying those percentages to 10 delegates means no rounding is necessary — the final delegate tally would be:

Let’s pause on this. Sanders here ended up with 60 percent of the delegates at stake, but in the earlier example he ended up at 30 percent (the same as Biden) after rounding. And he got the exact same number of votes and percentage of the statewide total in both examples.

It’s a dramatic difference — particularly when you keep in mind that you need an outright majority of delegates (not just a plurality) to be assured of the nomination. For any one candidate to get on track for that, they need to win majorities of delegates in a lot of places. So when it comes to big statewide delegate hauls like those in California and Texas, the difference between the winner getting 30 percent or 60 percent of those delegates is massive.

It could get even more dramatic. If one candidate is the only person to clear 15 percent, they get all of the delegates at stake. And in a contest where delegates are allotted proportionally, it’s a huge win for any candidate to be able to scoop up 100 percent of them somewhere.

So in a messy race like this, it’s not just about who wins. It’s about how much that person wins by and how many other people manage to top 15 percent of the vote.

Most delegates are allotted based on congressional district results

There’s one other important-but-confusing part of Democrats’ delegate rules: that delegates are awarded in different batches in each state.

First off, around 65 percent of delegates across the country are actually awarded according to the results in individual districts — not states. The above formula (from the 15 percent threshold to rounding) gets applied in every district. Most states use congressional districts, though Texas uses state senate districts instead.

Second, there’s even some confusion with the statewide delegates, because most states award them in two separate batches. There are the ordinary “at-large” statewide delegates, and then there are the PLEOs, or “party leaders and elected officials.” (These aren’t the infamous “superdelegates” who can support whomever they want; pledged PLEO delegates are pledged to back a certain candidate based on the results in the contest.)

Using the same statewide results, the delegate allocation formula is applied separately to both the at-large delegate batch and the PLEO delegate batch. The proportional results will be similar, but due to the rounding step, there can be differences in how the delegates end up in each batch.

As an example, here’s how Arkansas (a Super Tuesday state) allocates its delegates in six batches.

The big picture for the 2020 Democratic contest

So yes, that was a lot. But here’s a brief summary cheat sheet to tie it all together:

Got all that? Good. Now you’re ready to make sense of Super Tuesday’s results.

The US is back in the international climate game