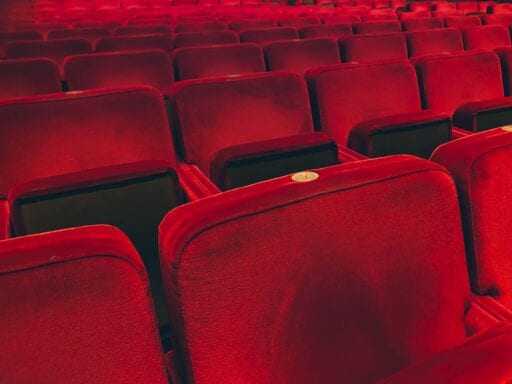 Florida theaters have been allowed to reopen, but the guidelines are a bit confusing. Here’s how SAK Comedy Lab handled it.

It became clear, at the beginning of the pandemic, that the live-events industry was in a dangerous predicament. American legislators deemed grocery stores and pharmacies essential businesses, meaning they’ve remained open throughout even the most chaotic moments of 2020. Restaurants offered takeout and delivery to stymie the losses from the lack of dine-in service, and the retail sector perfected curbside pickup and mask mandates for indoor customers. But theaters, where hundreds of patrons squeeze together in darkness for a few hours, seemed elementally incongruent to all the preventative measures doled out by the CDC and NIH over the past seven months. Chris Dinger, a 34-year-old improv player and the managing director of SAK Comedy Lab in Orlando, Florida, says he’s still trying to figure out a path forward.

Florida has been aggressive in its reopening strategy during the Covid-19 outbreak, which means SAK got the green light to open its doors in early June. Dinger returned to the stage with three other performers for an audience capped at 30 percent capacity, eager to riff his way through the most turbulent time of his life. The staff taped the halls with social distancing landmarks, rationed out hand sanitizer, and installed gauzy acrylic barriers in front of the box office, all so comedy could thrive again. Dinger’s cast was eager for the work — it’s hard to find these days — but unsurprisingly, a significant number of the SAK players opted out of the homecoming. No matter how many rules you enforce, it’s hard to feel completely safe indoors with a $20 ticket, laughing among strangers.

Dinger started a donation drive for SAK at the beginning of the shutdown, and arranged a few Zoom-based shows for a handful of generous clients to keep some money flowing in. But the theater was still losing $40,000 a month during the stay-at-home order, which was and is a reality for countless venues around the country. The only reason SAK has survived thus far, says Dinger, is the nest egg he accumulated before the coronavirus struck. But the US needs to achieve some sense of normalcy if he wants to keep the lights on. We talked about what that means, as well as about the mixed messages Dinger received from Florida leadership and what it’s like to perform for a masked audience.

This interview has been lightly edited and condensed for length and clarity.

When did the coronavirus become a reality for you and your business?

It was in the middle of March. We went from, the week prior, having record-breaking revenues to our Thursday show being 30 percent down. That was when we were like, “Oh, wow, I guess this really is having an impact.” And then our Friday show was half down, and our Saturday show was abysmal. This was when we were trying to figure everything out. There were a lot of questions about if we were going to continue to have shows, and then the stay-at-home orders showed up and answered that question for us.

Do you remember what the mood in the theater was like during those shows?

My memory is telling me that it felt fairly normal except for the size of the crowds. The people that came were less risk-averse. For them, they were like, “Alright, let’s do this.” It was just the volume decrease that was the oddity. It’s a similar feeling to when a hurricane is coming, and the Saturday show is right on the border of people’s comfort zone.

What did you have to do with your cast? Did you need to furlough them? How did you navigate that time?

Our theater is unique in a way because we pay our players. That sounds funny, but a lot of clubs don’t pay their professionals. So a lot of ours are on 1099 contracts — they also work at Disney and Universal. They didn’t get furloughed; we just didn’t have any shows.

Did you see a path forward in the spring to get your business back on track? Around that time, it seemed impossible that live-performance venues would be opened back up anytime soon.

We were limited by what the state would allow us to do. Our approach was, “We’re going to operate more conservatively than the reopening protocols.” Theater is a lot more discretionary than food and other industries, so we stayed closed longer than we needed to. When we reopened, we allowed in a lot less people than the state or county prescribed. We’re still at a third when they told us we could have 50 percent capacity. We erred on the side of safety and caution and saw how our audience responded to that. We didn’t want to be seen as an extreme case. We were prepared to shut down if it became clear that hospitals were being overrun. Fortunately, so far, the measures we’ve taken seem to be sufficient.

When the theater was shut down, did you explore any other ways to generate some revenue for the company?

We were pretty much in the red the entire time. We added a donate button to our homepage, as well as a gift certificate. I knew it wouldn’t be much, but it was something. We collected $8,000 total that way. But our losses are about $40,000 a month, so $8,000 over the course of three months was nothing. It was humbling. We’ll take it, but there wasn’t much we could do. We did sell one or two private events [over Zoom] during the shutdown. So we came up with an online format and did that. But it was clear that if we were going to survive as a business, things needed to return back to some sort of normalcy.

Are you guys out of the woods yet on your financial situation?

We were lucky. In the years leading up to Covid, I was concerned about our lease downtown. If we got kicked out, we’d be caught flat-footed unless we had a good sum of money to move venues and build out a new theater. So I was collecting a fund for that purpose in case we couldn’t come to an agreement with our landlord. But what happened is we extended our lease five years and have a great relationship with our landlord now. With that threat off the table, we’re sitting with a nice pile of reserves. We entered the pandemic on financially solid ground. It gave us a longer runway to wait this thing out.

But we need to grow our revenues to slow the bleeding. At some point, we need to be breaking even again. There’s not much more we can cut. We’ve slimmed down as much as we can.

Do you feel like you’ve been given clear instructions from the state on how to operate during this pandemic?

It wasn’t perfectly clear. Part of that is understandable. It’s hard to make a set of guidelines that work for everyone. There wasn’t a lot of guidance on theaters specifically. There were plenty of rules for bars and restaurants, but we’re a different animal. So we looked to the big movie theaters for directions, and tried to read all the executive orders as best to our ability. We had an employee come in and ask if, when they’re working alone, they’re allowed to take their mask off while they’re at their desk. We didn’t know, so we called the Department of Health and we got a really cloudy response. “I guess it’s okay, unless someone else comes in.” There’s been a lot of that. So we just have to read everything and take our best swing at it.

What were some of the cleaning protocols you instituted upon reopening?

It was a lot of the obvious stuff. We put up acrylic barriers at our box office. We created one-way pathways in our halls. We have hand sanitizer everywhere, and social distancing markers. Before our auditorium opens, there’s a line outside the theater. So we decided to open our doors earlier to cut down on that. It’s been about mitigating the traffic flow. At the very beginning of reopening we didn’t have a mask mandate, but within a week that changed and we instituted that for all of our guests. We also went from six players on stage to four.

Has the tone of your improv shows changed at all during the coronavirus era?

It’s on a curve. It was a lot more early on where it was on the top of everyone’s mind. We referenced it a bit more back then. But now we might reference it at the top of the show, like when we’re asking for a topic, we might say, “What’s something that’s really disturbing and frightening, other than Covid?” It just becomes part of the new normal.

As someone who’s on the stage and pioneering the reemergence of our shows, it was interesting that first night back in late June. We had a small audience, 30 people in an auditorium that seats 250. They were all spaced out and wearing masks.

At first it was odd, but when the lights turned on, there was a palatable feeling of excitement and relief in the crowd. Just a taste of normalcy again, that people were happy to be back out after several months of being indoors. It felt surprisingly like our shows prior to the shutdown, just with a crowd full of muffled laughter.