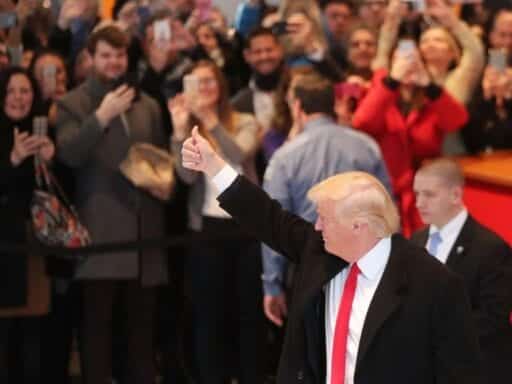 A chat with the paper’s newest high-profile hire.

BuzzFeed’s Ben Smith is leaving for the New York Times for many reasons. One of them, in a semi-roundabout way, is Donald Trump.

We can easily insert Trump into any conversation about anything, but this one happened organically during my chat with Smith this week on the Recode Media podcast. This was an exit interview: Smith is leaving BuzzFeed, where he has been the top editor for eight years. He’ll start his new gig as the media columnist for the New York Times in March.

One of the Very Big Questions about Smith’s move, at least among chattering media people, is whether this means that digital upstarts like BuzzFeed and Vox Media, which had very big ambitions a few years ago, have hit their ceiling.

It wasn’t surprising to hear Smith say he doesn’t think that’s true. It would be very surprising to hear him say, out loud, that the place he ran for eight years just isn’t big enough for his talent. But it was interesting to hear one of his arguments: That old media outlets like the Times have had a specific resurgence because of Trump.

That’s a two-pronged thesis. Part of it is that old-school media shops with very, very substantial resources — the Times’s newsroom has some 1,600 journalists, which makes it the biggest in the United States — and stable business models — the Times has successfully changed from an ad-supported operation to a customer-supported operation — have the capacity to cover the upheaval caused by Trump’s election and tackle many other projects at the same time.

And the other bit is that Trump himself is an old-school media guy. Yes, Trump uses Twitter to set agendas, settle scores, and threaten his enemies or potential enemies. But his media diet is very analog: He hoovers up print newspapers and linear TV — which is why he tweets about the stuff in them all the time.

Here’s the relevant excerpt from our conversation:

The pendulum swings in this business, and I think Donald Trump in particular elevated the New York Times and CNN in a way that was really transformational for them but also challenging. And they also are hiring lots of people because the subscription business is going really well. … I think that in this business, things are never over. It’s like politics. It’s a dynamic situation. I think over the last couple of years, in a big cultural sense, Trump swung the pendulum back toward legacy media because that’s what he’s obsessed with.

And massively elevated them. Where Obama had been interested in the future and interested in digital media and had elevated digital media. And I think that distinction is blurred between what’s digital and print. But I think that ultimately having a legacy business is still a huge, huge problem for anybody who’s printing. Anybody who’s broadcasting is putting a lot of their resources into maintaining a legacy business.

You can listen to our full conversation here or below:

Big Little Lies season 2, episode 2: “Tell-Tale Hearts” asks if families can survive their own secre...
The federal agency that’s supposed to protect workers is toothless on Covid-19
Nixon White House counsel: Trump doesn’t respect the rule of law
Is it ethical to hire babysitters, delivery services, and cleaners right now?
The Mueller report: what we know and don’t know
The CDC — finally — has new guidelines for reducing Covid-19 risk post-lockdowns