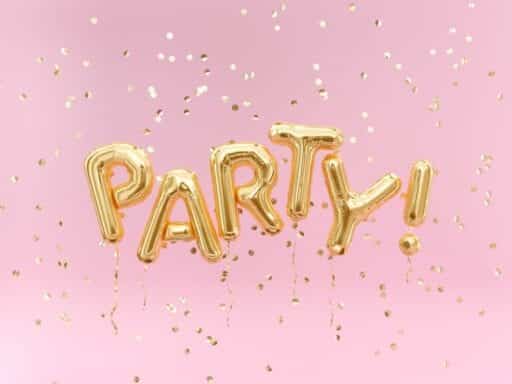 Celebrities and Instagram influencers might be over shiny letter-shaped balloons, but the industry is still on the rise.

On October 1, 2019, over 22,000 people in the city of Vista in Southern California were left without power for half an hour after a mylar balloon hit an electric circuit breaker. It’s not a particularly unusual occurrence in the golden state: in May, a written statement from electricity supplier Southern California Edison warned that metallic party balloons are “a problem that shows no end.” Mylar balloons — the shiny, helium-filled foil kind you see all over Instagram — caused 1,128 power outages in Southern California in 2018, nearly double the 656 recorded four years earlier. The Balloon Council, with its motto “Affirming America’s ongoing love affair with balloons,” now has a public awareness campaign warning customers to weight their inflatables.

Who’s releasing these balloons into the atmosphere? Let’s be honest, it could be anyone you know. Over the last five years, number- and letter-shaped foil balloons have become incredibly popular. If you search #30thbirthday on Instagram right now, five out of the nine “Top posts” feature hot pink, rose gold, silver, and gold balloons shaped like the numbers 3-0. At this point, whose name hasn’t been spelled out in balloon letters? Trump’s has. Britney’s has. North West’s certainly has. As of October 1st — the same date of the Vista power outage — there is even a romance novel with its title spelled out in balloon letters

Momentarily leaving aside the issue of power outages, how did these balloons become so popular? Are they big business for balloon companies, and will the bubble burst any time soon? Just how much longer can shiny letters guarantee triple-digit Instagram “Likes”?

It all started with Robin Thicke’s Big D. On March 20, 2013, the singer released the music video for his controversial song “Blurred Lines.” Forty seconds before the end of the video, the words “ROBIN THICKE HAS A BIG D” were spelled out in large silver balloons behind the dancing model Elle Evans. Then, in her 2014 Bangerz tour, Miley Cyrus posed with hot pink letter balloons spelling out the album’s name.

Briana Johnson, a trend and influencer marketing manager for the 102-year-old balloon business Pioneer Balloon Company, says Thicke and Cyrus used its balloons in both these instances. “In 2013, our letter balloons were brought to the public eye when Robin Thicke used them,” Johnson says, noting that other artists and celebrities followed suit. “Soon after that, online boutiques and party influencers started leveraging social media to show all of the fun ways to customize and incorporate them into different parties and events. Their popularity has continued to grow ever since.”

In a painstaking piece for Elle, journalist Nicole James chronicled the rise of metallic letter balloons. In July 2014, Victoria Beckham ordered the balloons for her daughter Harper’s third birthday, while in November, the Flaming Lips spelled out “FUCK YEAH RIOT FEST” at the end of the festival. In 2015, the balloons were pictured alongside everyone from Reese Witherspoon to Kris Jenner to Mindy Kaling, while in 2017, Beyoncé firmly cemented the trend with “Twinning” balloons. A year later, one man went viral after he began using the balloons to spell out inspirational quotes.

Johnson says that as number and letter foil balloons became more popular, different shapes — such as dollar symbols and hashtags — began to be manufactured. She says Pioneer Balloon (which has two lines, Qualatex for latex, microfoil, and bubble balloons and Northstar Balloons for foil letters and numbers) has directly teamed up with influencers to promote its products. “Our influencer collaborations have been especially successful with new product launches,” she says. When Northstar launched its new multicolored “Jelli” letter and numbered balloons in the summer, they teamed up with Genesis and Iravid Nieves — two Venezeulan balloon artists with 414,000 Instagram followers — to promote the line.

how to own yourseLf pic.twitter.com/sXPWVru9kI

Yet after a solid six years of big balloons, celebrities might just be getting over the fad. At her recent summer birthday party, Khloé Kardashian’s daughter True got only a singular “1” hot pink balloon, and her name was instead — quite naturally — sculpted out of foliage. Despite this, evidence suggests ordinary people still love letter balloons. Pioneer’s Johnson is not willing to give exact manufacturing figures but says growth has been “strong year after year.” These balloons are now used for baby showers, bachelorette parties, sorority recruitments, and even that well-known October holiday, Boss’s Day.

“I’m looking at 15 orders that I’ve got to ship out right now, just for Boss’s Day, that have come in over the last couple hours,” says Jason Handman, founder of Instaballoons.com, when I call him in early October. In 2017, Handman founded his company after searching for balloons to spell out his wife’s name for her birthday. “I didn’t want to go to Party City and pay like $20 a letter,” he says (a 34-inch balloon on his site is $4.99). “I thought, boy, it would be great if there was a site where you just go, type in whatever you want in balloons, and then you get them shipped to you.”

After setting up his website with a “balloon builder” function that allows you to visualise your chosen word or phrase, Handman purchased $5,000 worth of balloons and within five months had made his money back. This year, sales are up 120 percent on 2018, proving the trend is far from over. As well as allowing customers to make personalised phrases, Handman sells a series of set sayings (“Gobble til you wobble” for Thanksgiving, and “Get it girl!” for sorority rush are just two examples).

“It’s a competitive thing. A lot of other balloon stores weren’t really doing this kind of stuff, and it’s a search engine optimization tactic,” Handman explains of the premade phrases. In recent years, letter and number balloons have become widely available in a whole host of chain stores, with most Walmarts even stocking a full alphabet. For Handman, phrases gave him an edge. The most popular phrase of all time is “Prom?” for teen promposals, and Valentine’s Day meant February 2019 was Instaballoon’s highest sales month ever. “Even if there isn’t a major holiday, people are always celebrating birthdays and anniversaries. They’re always celebrating something.”

As well as premade phrases, Handman’s website offers a variety of balloon sizes. While the number and letter balloon trend took off with large helium-filled 40-inch balloons that filled the grand spaces where the Beckhams, Witherspoons, and Knowles-Carters of the world throw parties, smaller balloons are more affordable and manageable for most people. Sam Komar, VP of sales and marketing at CTI Balloons, the first company to mass produce foil balloons, says that while large 48-inch letters first became available nine years ago, global helium shortages mean smaller balloons that can be filled with air have now come into favor.

“Every single manufacturer makes them,” Komar says, “It’s very competitive out there in the marketplace, and people are using lighter-weight balloon film so that they can make the balloon smaller. It’s a good seller for everybody.” Komar estimates that balloon letters and numbers are between 5 percent and 10 percent of the balloon market, which he clarifies is “a lot.” “You can buy them anywhere now, even retailers that don’t traditionally carry balloons.”

Handman says that smaller balloons are his best sellers, but who’s buying them? The majority of his customers are aged between 18 and their mid-40s, and 80 percent are women. (And the most popular balloon colour is rose gold.) “Most people are going with the small letters,” he says, “because they’re not as expensive and they’re much easier to deal with.”

Smaller, air-filled letters are good news for electric companies like Southern California Edison; without helium, the balloons are less likely to float up into power lines, and you’re less likely to accidentally let loose a little balloon. These balloons also won’t worsen the third global helium shortage we’re experiencing in 14 years (important because helium has abundant medical uses). Still, small single-use foil balloons can have a negative impact on the environment. It can take up to four years for a latex balloon to decompose, while mylar balloons take longer. A University of Michigan researcher recently built a map that catalogues the balloon debris found commonly on beaches.

For his part, Handman encourages his customers to reuse their balloons, and he himself reuses balloons he inflates for promotional shoots. “To some extent you can deflate them and reuse them in the future,” he says. Komar is less concerned. “I think that one of those volcano eruptions there in Iceland can do more damage to the environment than 100 years of plastic,” he says.

The pair do agree on one thing, however: Both say the trend isn’t going anywhere. “I think it will be evergreen,” Komar says of number and letter balloons. “By evergreen I mean it will always be available and the consumer will always be buying it.” Handman adds: “In general, I think this trend will exist in some form or another, always.”

For Pioneer’s Johnson, “as long as personalization is big, balloon letters and numbers will be as well.” In 2018, a report by Obis Research entitled “Global Party Balloon Sales Market 2018, Industry Trend and Forecast 2025” estimated the market will be worth $330 million by 2025. While various bills have sought to ban the sale of foil balloons, for now, Big Balloon is winning.

To keep up with the Kardashians, the future might be in hedge trimmers, but with infinite letter combinations for infinite occasions, it’s no wonder the foil balloon industry hasn’t yet burst. “Our balloons are more than balloons,” reads the official Qualatex website. “They’re a way to educate, to decorate, to celebrate, to inspire, to profit, and to dream.”

The Snowman is a magnificently, transcendently awful movie
I bought into the worst stereotypes about black small-business owners, even after I became one
Stacey Abrams’s new essay on identity politics reveals why she’s a rising star
Was this famous war photo staged? Errol Morris explains.
Iraqi Parliament approves a resolution on expelling US troops after Soleimani killing
A new bill would make all police misconduct allegations and settlements public