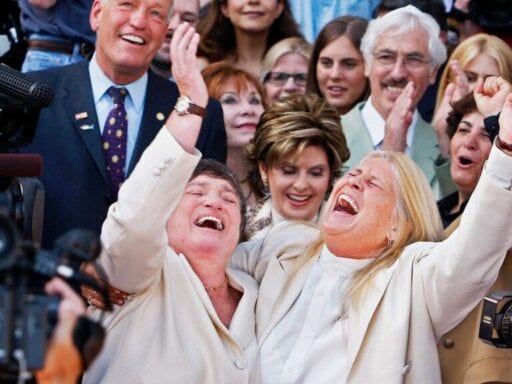 The decade saw a seismic shift in how society views LGBTQ people.

Part of the Decade Issue of The Highlight, our home for ambitious stories that explain our world.

When Robin Tyler married Diane Olson 11 years ago, she assured her it would be a small, simple wedding. “I promised Diane something very quiet, not a spectacle,” Tyler said, laughing.

The reality was anything but: Friends and family had to stand on chairs to watch the ceremony, which took place on the steps of the Beverly Hills courthouse in California, because of the throng of international press.

The couple’s wedding, the first same-sex marriage in Los Angeles, came just before a wave that swept the nation in the past decade, as a once deeply marginalized community was finally afforded access to marriage and all the benefits that come with it.

The effort had suffered sizable setbacks — in 1996, President Bill Clinton signed the Defense of Marriage Act, dubbed DOMA, defining marriage as between a man and a woman — but the losses inspired action on behalf of the growing LGBTQ and allied community. President Barack Obama, who originally showed support for civil unions only, vocalized his support for equal marriage in 2012, signaling a sea change in both political and public favor.

Then, in 2013, the Supreme Court heard the case of Edie Windsor, a New York woman who alleged discrimination after she was forced her to pay more than $300,000 in taxes on the estate of her late partner of 40 years because the federal government did not recognize their marriage (spouses are exempt from such taxes). The Court supported Windsor’s claim, effectively ending DOMA, and then took on Obergefell v. Hodges in 2015, which held that the 14th Amendment requires states to license and recognize same-sex marriage.

The 2010s were a decade of great consequence for LGBTQ Americans, but nothing was more significant than the struggle for equal marriage. The hard-fought win, after several decades of attempts to sway public and political opinion, helped usher in a fast and unprecedented shift in values. Now, however, there are signs that partisans are trying to roll back gains.

“I always believed that if once we obtained marriage equality, a lot — not everything, but a lot — would fall into place,” says Roberta Kaplan, who represented Windsor before the Supreme Court. “Because we would have a legal system that fundamentally recognizes the equal dignity of who gay people are.” (Windsor died in 2017.)

A lesbian who has been married for 14 years, Kaplan says the fight was never just about marriage; instead, striking down DOMA was “the key to achieving broader equality and broader acceptance of gay people in this country.”

”People can have whatever opinions they want about marriage,” Kaplan says. “It was much more about, ‘This is how our legal system recognizes who people love.’”

For Tyler, a lesbian comic and activist, the court cases were a culmination of decades of struggle. She produced one of the first-ever demonstrations for marriage equality rights at the March on Washington for Lesbian and Gay Rights in 1987, in the thick of the AIDS crisis, when outward homophobia was at an all-time high.

”When one [partner] passed away, the other would lose the home,” Tyler says. “Many families that come in and just take over — [partners] weren’t even allowed to go to the funeral, let alone have any of the assets. It plunged a lot of people into poverty.“

Tyler and Olson began applying annually for a marriage license in Beverly Hills in 2001, and were subsequently denied every year. Instead, couples were appeased with civil unions or domestic partnerships, providing special recognition but limited rights. When Tyler was preparing to retire in 2004, she found that Olson, later diagnosed with cancer, would no longer receive medical benefits as Tyler’s domestic partner. They, along with thousands of other protections, were for married people only.

”Our job was to step out of the closet and become warriors and demand equality,” Tyler says. (Olson died of brain cancer in 2019.) “Now that they see us as human beings, I think it really brought a lot of people over to our side.”

Nationally, attitudes were shifting toward acceptance. The Pew Research Center has polled Americans on same-sex marriage for two decades now. This year, the center found that a majority of Americans (61 percent) now support same-sex marriage; a complete flip from its 2004 polling, in which Americans opposed it 60 percent to 31 percent.

”This is definitely one of the larger opinion shifts on high-profile issues that we’ve seen in the past few decades,” says Alec Tyson, senior researcher at the Pew Research Center. “It’s fairly rare in a relatively short period of time to see the public essentially reverse its opinion.”

Diana Mutz, a professor who studies political communication at the University of Pennsylvania, agrees. With co-author Hye-Yon Lee, Mutz’s research on the topic suggests that America’s population has become both more educated and less religious than it has ever been, leading to a broader acceptance of non-traditional, non-heteronormative ideals. Data also suggests the unifying fight for same-sex marriage led to more Americans identifying as LGBTQ to friends, family, and coworkers, helping to improve visibility and respectability.

But Shannon Minter, legal director of the National Center for Lesbian Rights, cautions that the community should be careful to be gracious winners in Trump’s America.

“There is a perception that this is a battle that we have won — and that’s true, we have,” Minter says.

But when Trump was elected in 2016, some LGBTQ people and allies worried there would be major setbacks to the movement, including a possible rescinding of marriage equality. The latter isn’t likely, Minter and Kaplan agree, but the Trump administration and conservative Supreme Court have alternatively fixated on removing other LGBTQ protections, including banning openly transgender people from serving in the military and considering LGBTQ discrimination viable under the protection of religious freedom.

“I think the fact is that marriage equality is here to stay,” Kaplan says. But, she continues, “the degree to which equal dignity for gay people gets chipped away in various circumstances as a result of first amendment free exercise arguments is very much a live issue.”

Although it’s been less than five years that marriage was an option for every same-sex couple in the United States, a new, younger generation can barely recall a time when their gay family members or friends couldn’t be legally wed. Kaplan says her teenage son and his peers don’t see any difference between LGBTQ and non-LGBTQ people.

“I never thought this will come to this, but sometimes I just feel like a fuddy-duddy,” Kaplan says. “They just act like this was never an issue. What’s so amazing is that for so many of them, it never was.”

Trish Bendix is a writer based in Los Angeles. She is a regular contributor to the New York Times and Conde Nast’s Them.

US officials say their pressure on Iran is working — and that’s why tensions are getting worse
What President Joe Biden would do to stop Covid-19
Vox live results: Joe Biden wins the presidency
2018 was the fourth-hottest year on record, NASA and NOAA report
The soothing beauty of Shipwreck YouTube
Questions to ask yourself before sharing images of police brutality