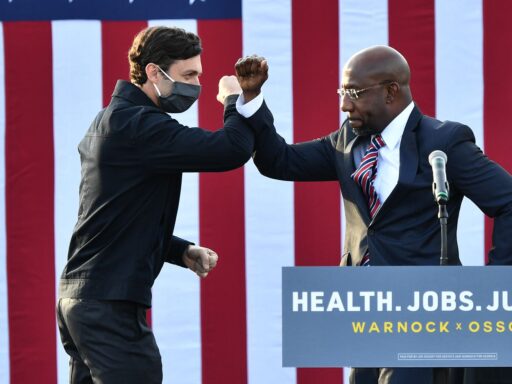 Democrats flipped two long-shot Senate seats in Georgia. Can they do it again?

Everything went right for Democrats in Georgia on January 5.

Jon Ossoff and Raphael Warnock became the first Democrats Georgia voters elected to the Senate since 2000, two months after President-elect Joe Biden became the first Democratic presidential candidate to win the state since 1992. Neither race was super close. Both Democrats won with margins outside of Georgia’s threshold for a recount; Republicans David Perdue and Kelly Loeffler have both since conceded. How did the Democrats do it?

Ossoff ran 88,000 votes behind Perdue and 100,000 votes behind Biden in the general (Warnock’s numbers are harder to parse because he was one of 20 candidates in an all-party primary in November). The New York Times’s Nate Cohn estimated the Black share of the electorate went up by around 2 points from November, but added the caveat that he wouldn’t know for sure until full data is released in the coming weeks.

It will take more time to unpack exactly what happened. Georgia’s demographic change, Atlanta’s fast-growing suburbs, and years of work by voting registration groups are all huge parts of the story. There’s also the fact that the Georgia Republican Party was at war with itself throughout the Senate race, as President Donald Trump tore into Republican officials in the state over his own November loss.

With the 2022 midterms on the horizon, Democrats want to replicate their success in other states — particularly North Carolina, another Southern Sunbelt state with an open Senate seat in the next midterm cycle. Democrats see increasing opportunity in states with growing suburbs that are trending blue. They want to continue to supercharge Black turnout in Sunbelt and Rust Belt states alike, which organizers say will be contingent on whether Biden and the new Congress can deliver on their promises of economic relief and racial equity.

Of course, favorable demographics are just one piece of the puzzle; they’ll also need to find the right candidates and heavily invest in states they want to win.

“Treating Georgia the same as any other Sunbelt state is a mistake in some regards, but there are things we learned from Georgia that absolutely can be replicated,” Democratic pollster Molly Murphy told Vox.

Georgia’s suburbs are trending toward Democrats

Going into the 2020 Senate race cycle, many national Democrats thought they’d have more luck beating Republican incumbents in states like Maine, North Carolina, or even Montana — all of which they lost.

Democrats weren’t counting as much on Georgia, even as Perdue repeatedly warned fellow Republicans that the state was going to be close. To understand why Democrats ultimately flipped Georgia, and why Ossoff and Warnock far surpassed their November margins, you have to understand the particulars of Georgia.

A big part of the story is Atlanta’s fast-growing suburbs, which are experiencing some of the most exponential growth in the entire country. Between 2010 and 2019, the metro Atlanta area’s population grew from about 5.3 million people to more than 6 million, according to data from the US Census Bureau, reported by Curbed. That spike in population put the Atlanta metro area fourth in growth nationwide, behind Houston, Dallas, and Phoenix.

Though Democrats have been making tremendous gains in various suburbs during the Trump era, growing suburbs don’t automatically translate to Democratic wins. Case in point: Democrats were able to flip Senate seats in Arizona and Georgia but still fell short in Texas — losing that state’s Senate seat and 10 Republican-held House seats they attempted to put in play.

Still, Republicans are worried about the long-term trends in suburbs.

“Republicans for the first time in memory lost the suburban vote in 2018,” Republican pollster Whit Ayres told Vox this fall, adding, “There is no sign at all that they are moving back toward Republicans. If anything, they are voting more strongly for Democrats today.”

That trend continued in 2020, with suburbs and smaller cities in key states like Michigan, Pennsylvania, Arizona, Georgia, and Wisconsin helping swing the election decisively toward Biden. As these states swung from Trump in 2016 to Biden in 2020, the source of Biden’s strength came largely from suburbs while Trump stayed strong in rural areas, according to a Brookings analysis.

Trump has only accelerated the suburban backlash against Republicans in many parts of the country, particularly repelling suburban women who dislike Trump’s macho insults and recklessness.

Black vote surged, while white turnout didn’t quite match it

One group deserves a lot of credit for Democrats’ victory in Georgia: Black voters.

This January, Black voters showed up in massive numbers, both in suburban counties outside Atlanta and in more rural ones around the state. This could be in part due to Warnock’s deep ties to the Black church, which has been working to mobilize voters since the civil rights movement. No matter the reason, Black voters proved incredibly consequential.

While the whiter suburbs north of Atlanta’s metro area shifted toward Biden in the November general election, Wasserman noticed the places that were overperforming for Warnock and Ossoff in January were the more heavily Black southern Atlanta suburbs, including Rockdale, Clayton, Douglas, and Henry counties. Predominantly Black rural counties, too, voted strongly for the Democrats.

“By relative standards, it was spectacular in January,” he added. In other words, even though white voter turnout would probably have been good by the standard of lower-turnout runoffs in the past, it was eclipsed by the enthusiasm of Black voters.

Voting rights groups laid the framework for a win in Georgia by organizing there for years, especially focused on low-propensity voters. In the runup to Georgia, these groups focused on turning out youth voters and voters of color. It took many months of work; organizers started reaching out to prospective voters a full year before the January 5 runoffs happened.

“Our persuasion beginning in January 2020 was to make them believe that voting mattered at all,” Nsé Ufot, CEO of the voting rights group New Georgia Project, told Vox. “That’s not a September conversation, it’s not an October conversation.”

They were also aided by Georgia’s 2016 automatic voter registration law, which data shows has helped register millions of people through the state’s DMV. The Georgia secretary of state’s office said that of the over 7.5 million people registered to vote ahead of the 2020 election, more than 5 million registered through the DMV’s automatic registration process.

Georgia organizers told Vox another big factor was the Democratic Party actually making an investment in the state, a big difference from past years.

“I think the answer is, Georgia is competitive when we compete,” Working Families Party senior political strategist Britney Whaley told Vox. Whaley and other in-state organizers told Vox there was a massive difference between pre-November and from November to January in the investment the national party poured into Georgia.

The Georgia Senate races set records for being the most expensive Senate races in American history: over $829 million combined spent on both races, according to OpenSecrets (the Ossoff/Perdue race was slightly more expensive than the Warnock/Loeffler matchup).

Democratic investment and a relatively smooth campaign for both Ossoff and Warnock is only part of the story. Republicans certainly worked hard to leave a negative impression about both Democratic candidates, but the GOP was also busy with an all-consuming intraparty battle between Trump and Georgia Secretary of State Brad Raffensperger over Trump’s November loss.

Trump expended far more energy trying to get Raffensperger to overturn the result of the November election — at one point phoning the secretary of state to “demand” he find more than 11,000 votes for him that didn’t exist — than he did campaigning for Perdue and Loeffler. Some Republicans feared Trump’s constant complaints about a “fraudulent” November election and insinuations that Georgia election officials were corrupt would make his supporters stay home. It’s hard to quantify exactly how much Trump’s rhetoric impacted the Georgia runoffs, but it was undoubtedly a factor.

“It’s hard to say in a race that had everything that one thing was the difference-maker,” a Democratic pollster told Vox. “I don’t think Ossoff or Warnock made any mistakes … but it would be impossible to say that these victories would have been achievable had Trump not been doing what he was doing, had Loeffler and Perdue not been blowing every way with the wind.”

Could Democrats flip other Southern states?

As Democrats look to a slate of 2022 midterm House and Senate races, they have several opportunities, as well as challenges.

As far as Senate races go, there are eight states both parties view as competitive: Florida, North Carolina, Pennsylvania, Wisconsin, Arizona, Georgia, Nevada, and New Hampshire. Those can be pretty evenly split into Rust Belt states (Pennsylvania, Wisconsin) and Sunbelt states (North Carolina, Florida, Arizona, Georgia, and Nevada). New Hampshire is closer to the Pennsylvania and Wisconsin grouping, but the New England state is much smaller and whiter than any other on this list.

The 2020 elections showed Democrats are making gains in most Sunbelt states and could build on their success in states with growing suburbs and diverse voting populations. Democrats most immediately need to think about recruitment and who they want to have run for these seats. Warnock and new Arizona Sen. Mark Kelly — who both won special elections — will once again have to defend their seats.

As far as other potential pickup opportunities in Sunbelt states, Democrats need look no further than an open Senate seat in North Carolina. The state has a smaller share of Black residents compared to Georgia — around 22 percent compared to Georgia’s 32 percent — and its larger rural population also makes it a tough state for Democrats. Democrats saw North Carolina as one of their four likeliest flip opportunities of the 2020 cycle, but they failed to turn the state blue at the presidential or Senate level.

“Democrats need to find other states that fit a similar profile, and to my mind there’s one — it’s North Carolina,” Wasserman told Vox. “Democrats should be winning North Carolina if they’re winning Georgia, but they’re not.”

Democrats weren’t helped in the 2020 Senate race by running Cal Cunningham, a candidate tarnished by a sexting scandal. Multiple sources Vox spoke to said they thought Cunningham’s scandal sank him in the race.

More immediately, national Democrats may want to consider elevating a Black candidate in a state like North Carolina. After all, the last time Democrats won a Senate race in North Carolina was 2008, the same year Obama flipped the state. Some names being discussed include former US Secretary of Transportation Anthony Foxx and former North Carolina Supreme Court Justice Cheri Beasley.

Democrats ran a dynamic Black candidate in South Carolina and still came up short, but many want to see North Carolina Democrats shake up their recruitment and run someone other than a moderate white man.

It’s true: 1 in 1,000 Black Americans have died in the Covid-19 pandemic
Coachella 2019 fire: What we know
The border crisis is a reminder that Trump has no idea what he’s doing
A Stanford psychologist on the art of avoiding assholes
Nancy Pelosi explains what Democrats gained by holding onto the articles of impeachment
Trump changed the electoral map; new polling shows it’s changing back