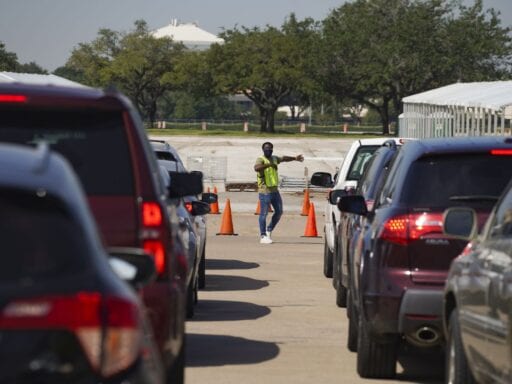 This is not how the law is supposed to work.

Late Monday night, the United States Court of Appeals for the Fifth Circuit denied a request by four Republicans and their lawyers to shut down drive-through polling sites in Harris County in Houston, Texas.

Shortly before the Fifth Circuit ruled in Harris County’s favor in Hotze v. Hollins, however, Harris County Clerk Chris Hollins announced that he was shutting down nine of the 10 drive-through voting sites in his county anyway — voluntarily giving the Republican litigants a 90 percent victory even though they lost in court.

Why would he do that?

The short answer, as Hollins explained on Twitter, is that he has no confidence that an increasingly conservative judiciary will allow votes cast at many of Harris County’s drive-through sites to be counted. Hollins closed the sites out of fear that Republican judges would order these ballots tossed out after the election has already taken place:

My job is to protect the right to vote for all Harris County voters, and that includes those who are going to vote on Election Day. I cannot in good faith encourage voters to cast their votes in tents if that puts their votes at risk. 3/

Only one of Harris County’s drive-through sites is located in a permanent structure — the one at Houston’s Toyota Center. And a conservative federal judge suggested on Monday that Texas law only permits Election Day early voting to take place in “buildings” and not in temporary structure such as tents. So Hollins shut down the nine sites that are not in permanent buildings out of an abundance of caution.

The Hotze case, as I’ve previously explained, borders on frivolous. It should never have been in federal court in the first place. And it certainly shouldn’t have been litigated late at night on the day before the election — there are longstanding doctrines providing that litigants who wait until the very last minute to bring a lawsuit should not prevail in court.

But a 6-3 Republican Supreme Court sent loud signals this past week that it intends to rewrite many of the rules that have governed elections for over a century. Worse, several justices have threatened to toss out ballots that were lawfully cast under the rules that were in place when the voter submitted their ballot, but that violate new rules that the Supreme Court created after the voter already voted.

And if the election officials fail to predict what the courts will do in the future, countless voters could be disenfranchised.

The Hotze case seeks to shut down all 10 drive-through voting sites in Harris County — sites that were set up so that voters who feared becoming infected with Covid-19 could vote in a setting where they’d have minimal contact with other people. It also seeks to toss out nearly 127,000 ballots that were already cast at these sites during the early voting period between October 13 and the 30. (Although it’s unclear whether the Hotze plaintiffs will pursue their case to the Supreme Court, a different plaintiff could potentially raise similar claims after the election.)

There are many reasons why the Hotze litigation should fail, but one of the most important ones is that the plaintiffs in this suit — including a sitting Republican state lawmaker and two Republican candidates for public office — waited until very late to file their federal lawsuit.

But the Hotze plaintiffs waited until October 28 to file their lawsuit, after tens of thousands of voters had already taken advantage of early voting.

There are several doctrines providing that plaintiffs who wait so long to invoke their supposed legal rights should not prevail in court. As the Fifth Circuit has explained, a doctrine known as “laches” provides that “equity aids the vigilant and not those who slumber on their rights.”

And yet the Hotze plaintiffs filed their motion asking the Fifth Circuit to shut down the drive-though polling sites at 9:30 pm on Monday — on the eve of the election.

Republicans on the Supreme Court have not applied Purcell in a fair and equitable way.

The Supreme Court’s Republican majority has been ruthless in applying the Purcell principle to strike down lower court orders that made it easier to vote. The Republican National Committee case, for example, ordered certain mail-in ballots tossed out because the lower court judge who ordered those ballots counted did so too close to an election day. Justice Brett Kavanaugh also relied on the Purcell principle when he joined a decision reinstating a requirement that South Carolina absentee voters have their ballots signed by a witness.

But the Court has shown much less enthusiasm for the Purcell principle when Republican litigants try to make it harder to vote.

Notably, newly confirmed Justice Amy Coney Barrett was not on the Court when Republican Party first came before the justices. It is likely that she would have provided the fifth vote to change Pennsylvania’s election rules to make them harsher, if she had participated in the Republican Party case.

Justices Thomas, Alito, and Gorsuch, meanwhile, threatened to toss out the relevant Pennsylvania ballots after the election has already taken place. And they may do the same in a similar case out of North Carolina.

Given this behavior, it’s understandable why Hollins decided to shut down the nine drive-through polling sites. It’s no longer possible for election lawyers to give their clients reliable advice about what those clients can and cannot do. And the Supreme Court appears to be applying doctrines like the Purcell principle in an erratic — or potentially even a partisan — way.

For these reasons, county clerks like Hollins can’t be certain that their actions will be upheld by the courts, or that voters won’t have their ballots tossed out for arbitrary reasons, even if existing law says that such ballots should be counted. That means that polling sites will be shut down and election officials will take other actions that make it harder to vote, not because the law requires such actions, but because election officials are plagued by uncertainty about what the courts will do.

What Trump has done to the courts, explained
Coronavirus has already dealt a half-billion-dollar blow to the tech industry’s events economy
How Pete Buttigieg became the new toast of Silicon Valley’s wealthiest donors
Donald Glover and Rihanna’s surprise film Guava Island is streaming free for a limited time
The gossip accounts telling you which TikTok star is dating which YouTuber
The pandemic will put billionaires’ commitment to journalism to the test