How Islamist militant groups are gaining strength in Africa 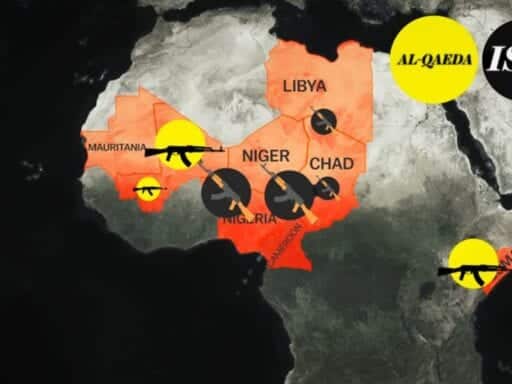 Terrorist groups are destabilizing countries all over the continent.

For the past decade, Islamist militant groups have been gaining ground in Africa. In 2015, Nigeria’s Boko Haram became the world’s deadliest terror group. Since then, five African militaries, backed by the US and EU, have tried and failed to defeat them.

The group continues to launch violent attacks and has shifted its focus to the Lake Chad region, one of the poorest and most neglected areas in the world. In the absence of the state government’s presence there, Boko Haram has been exploiting locals, raiding villages, and recruiting people to fight for them.

In 2016, the group split into two. The new group, the Islamic State West Africa, offers protection against Boko Haram to defenseless communities in exchange for a tax and recruits.

The strategy is clear: Exploit poverty and local conflicts in ungoverned spaces. Islamist militant groups have used that as an opportunity to gain momentum across Africa.

Watch the video above to see how Islamic militant groups have made parts of Africa the most dangerous in the world. You can find this video and all of Vox’s videos on YouTube. Subscribe for the latest.

“A recipe for toxic stress”: an expert on why Trump’s family separation policy is so damaging to kid...
Your super cheat sheet to a super big week of news
Trump says he likes the immigration issue in this election
White House counsel Don McGahn is worried Trump’s setting him up on obstruction — so he’s talking a ...
Live stream: Testimony continues on FBI's handling of 2016 election investigations
Ex-Trump adviser says black Fox guest out of 'cotton-picking mind'