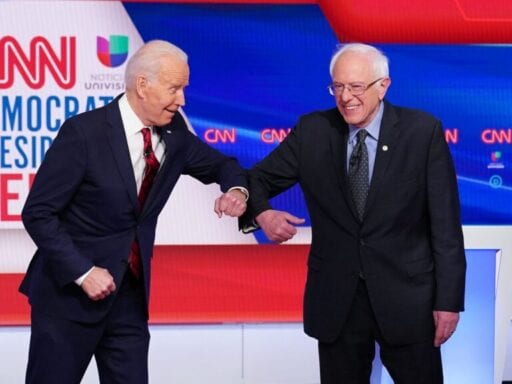 Democratic presidential hopefuls former US Vice President Joe Biden and Sen. Bernie Sanders greet each other with an elbow bump as they arrive for the 11th Democratic Party 2020 presidential debate in a CNN Washington Bureau studio in Washington, DC, on March 15, 2020. | Mandel Ngan/AFP via Getty Images

Where Biden and Sanders’s policy-focused task forces go from here.

A “unity” task force created by Vice President Joe Biden and Sen. Bernie Sanders has released a detailed set of policy recommendations for an incoming Biden administration, if he wins the November election.

The administration it imagines — while not so progressive that it would embrace plans like Medicare-for-all or a jobs guarantee — would push for one of the largest public sector investments in decades. On Wednesday night, a senior campaign aide described Biden’s forthcoming economic plan as the “largest mobilization of public investments in procurement, infrastructure and [research and development] since World War II.”

It’s also a sign of Biden’s success in his ongoing push to unite the party: Numerous progressives on the task force chosen by Sanders told Vox they were happy with the mark they made on the final product.

Perhaps one of the most ambitious goals in the report, released Wednesday, is its commitment to achieve net-zero greenhouse gas emissions by 2050, plus more immediate benchmarks on climate — including a national goal of net-zero greenhouse gas emissions for all new buildings by 2030, and eliminating carbon pollution from power plants by 2035. The report also advocates the creation of a postal banking system to expand banking access for low-income families, and a ban on for-profit charter schools.

Progressives see a list of ideas “that goes beyond a status quo and goes beyond where Biden had campaigned in the primary,” Faiz Shakir, Sanders’s presidential campaign manager in 2020 and an integral member in creating the task forces, told Vox. “If you look across all these documents, you’re going to see a massive public sector investment in job creation.”

Numerous people Vox interviewed said Biden’s thinking about how bold to be is being pushed by the Covid-19 pandemic, the resulting economic woes, and the national conversation around systemic racism in America.

The convergence of all three things has pushed Biden to adopt the mantle of New Deal President Franklin Delano Roosevelt in recent months. On Thursday, Biden will deliver a speech unveiling the first plank of his campaign’s economic plan — expected to be its policy centerpiece.

“Much like FDR faced a structural crisis of economic insecurity, we’re at a similar place,” said Jared Bernstein, Biden’s former chief economic adviser in the Obama White House and a member of the economy task force. “The vice president recognizes that the extent of market failure here is not something you can fix with a Band-Aid, and that structural reforms are necessary.”

Biden and Sanders each praised the report in a joint statement on Wednesday.

“Though the end result is not what I or my supporters would have written alone, the task forces have created a good policy blueprint that will move this country in a much-needed progressive direction and substantially improve the lives of working families throughout our country,” Sanders said.

Biden said that President Donald Trump’s current response to the still-raging coronavirus in America means that “this election offers the chance to usher in a stronger, fairer economy that works for our working families.”

“I commend the Task Forces for their service and helping build a bold, transformative platform for our party and for our country,” Biden added.

While it’s still unclear how many of these specific policy recommendations Biden’s campaign will adopt or work into their official policy, Democrats will know soon. The next concrete step for the task force report is for participants to advocate for it to be incorporated into the Democratic Party’s platform at the 2020 Democratic National Convention, which starts on August 17.

But Sanders’s allies are clear that they don’t see the report as the final stop. They are lobbying Biden’s campaign to make sure any incoming transition team or administration contains a number of progressives.

“Phase two is continuing to shape and alter the Biden campaign’s positions,” Shakir told Vox. “We obviously are advocating for some of these members to be involved in transition planning. They send a symbolic message of what kind of administration are you trying to form. Here, you’ve got a progressive policy blueprint; now you need the progressive policy personnel to make it happen.”

Progressives told Vox they felt especially good about the wins they secured on two task forces: education and climate. On the economy task force, a big sticking point was a federal jobs guarantee program, which did not make it into the final list of recommendations (even though language saying the “government must enact measures to create jobs and jobs programs like those effectively used during the New Deal” did).

“Particularly on climate, I think we actually made far more progress than I think I even anticipated,” Sunrise Movement co-founder Varshini Prakash, who served on the climate task force and was a Sanders pick, told Vox. “In large part, that was because many of the advisers on climate on Biden’s side were also equally amenable to ambitious action as many people on the Bernie side.”

On education, American Federation of Teachers president and task force member Randi Weingarten, a Biden pick, told Vox she thinks the task force recommendations could encourage Biden’s education plan to go much further than either the Trump or Obama administration did.

“It’s a paradigm shift from the tearing down that you have right now with Trump and [Education Secretary Betsy] DeVos and their defunding, destabilizing, undermining philosophy,” Weingarten said. “But it’s also different than ‘accountability is the be-all, end-all’ of the Obama administration.”

While the Biden and Sanders teams may have started out in more agreement on climate, there was a clearly differing view on health care, with Sanders supporters in favor of Medicare-for-all and Biden’s campaign favoring a public option. And on issues like this — and criminal justice — the campaign didn’t move as far left.

“Though we have disagreements, I believe we’ve come together with something that reflects the average of where we stand and allows us to fight for a health care policy that would extend health care for millions of people,” said Dr. Abdul El-Sayed, a single-payer advocate who was a Sanders pick for the health care task force.

“I feel they made a constructive contribution to that end,” said Chris Jennings, who was a health care policy adviser during the Obama administration and was a Biden pick for the health care task force. “I do believe the outcome is a stronger product and a more unified party.”

Here are some of the most notable policy recommendations it contains; the full report can be read here.