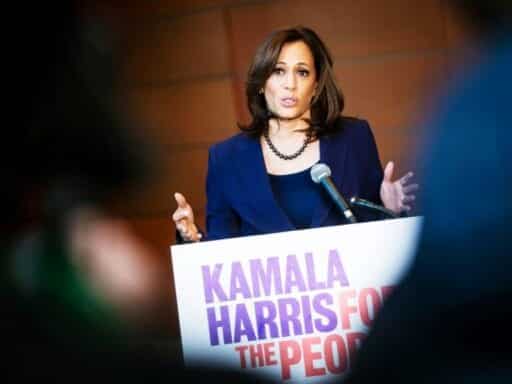 As the culture moves away from institutionalization, Harris seems to want locked wards and forced drugging to be more “accessible.”

In August, Sen. Kamala Harris was praised for being the first 2020 presidential candidate to announce a plan on general disability community policy. It was clear the Harris campaign had engaged in a thoughtful discussion with community leaders about what matters to its members. But on Monday, when Harris’s campaign rolled out its mental health policy plan, it had not been nearly so thoughtful. Harris seems to have gone all-in on attacking the freedom, dignity, and privacy of people with mental health conditions. People like me.

In 2014, I voluntarily admitted myself to a psychiatric hospital while deeply suicidal. What followed was one of the most harrowing and dehumanizing experiences of my life. I wasn’t allowed to decide what to eat, what to do all day, or what to wear in any meaningful way. I was talked over like I wasn’t there.

In some inpatient psychiatric treatment programs, you can refuse to do the things expected of you, but that just gets you labeled “non-compliant,” and there are consequences. You can be strip-searched or have what few belongings you have pawed through for any reason. There is an ever-present threat of violence that staff are allowed to use against you. No one will question it, and no one will believe you if you complain, because you’re crazy. Nothing you say matters.

My experience was better than the experiences of my friends. I was never physically restrained by staff or locked up alone, both of which happened to others during my time in the locked ward. I was fortunate to have family support and good health insurance. I cannot imagine how much worse the experience would have been for me, how long I might have gotten trapped in the system, if I did not. Inpatient psychiatric care is a world in which rights are just suggestions, and where staff exert an exceptional amount of control over every aspect of your life.

Harris’s plan touts making such treatment “accessible” to more people, whether we like it or not. “Accessibility” is a celebrated word in disability rights. It represents ramps, large print, and sign language interpreters — accommodations and adaptations that help people with disabilities fully participate in the world. The “access” promised in Harris’s plan is to locked wards, forced drugging, and the denial of the same right to privacy afforded to other Americans. Her proposed policy distorts “access” beyond recognition.

Overall, the language Harris uses in her plan is astonishingly Orwellian. Promising “mental health care on demand,” “[increasing] access,” and “ending the mental illness to jail pipeline” all sound good on the surface, but the devil is in the details. For example, to address “access to hospitals, housing, and other care facilities,” Harris proposes repealing something called the Institutions for Mental Disease exclusion.

The IMD exclusion is a longstanding policy under Medicaid that prevents the use of Medicaid funding to pay for inpatient care in facilities with more than 16 beds. Essentially, what it does is prevent government funding for insane asylums. Harris’s plan euphemistically calls these Medicaid-funded insane asylums “psychiatric assisted living campuses.”

For the past 50 years, America has been undergoing de-institutionalization, a move to treat mental health conditions in the community rather than sequestering people from normal society. Allowing Medicaid to pay for asylums would financially incentivize turning back the clock on decades of civil rights work by people with mental health conditions and our allies. The Trump administration has been chipping away at the IMD exclusion for years and recently called to bring back asylums as a response to gun violence. One would think that being on the same side of an issue as the president would give Democratic primary candidates pause.

South Bend, Indiana, Mayor Pete Buttigieg and Sen. Amy Klobuchar have proposed repealing the IMD exclusion in their mental health and addiction plans. Harris’s plan, however, takes measures several steps further. Under the heading “End the mental illness to jail pipeline,” Harris proposes expanding funding for assisted outpatient treatment programs. These programs paternalistically allow courts to require a person to undergo mental health treatment. Harris is, essentially, asserting that people have a right to be forcibly medicated. The report her plan links to as a source states that doing so is “cost effective.”

The medications typically prescribed in AOT programs are antipsychotics and mood stabilizers. These drugs can be beneficial for people with certain conditions like bipolar disorder or psychosis. However, over the course of a year, only half, on average, will continue taking the drugs. This is not because people are stupid or lack insight into their own illness. Antipsychotics and mood stabilizers tend to have heavy side-effect profiles.

For example, common side effects include drowsiness and major weight gain. A less common but alarming side effect is tardive dyskinesia, a lack of control over muscle movements. Mood stabilizers can cause kidney and thyroid problems. People who take these medications need to have an open, cooperative process with their prescribing physician; finding a drug or drug combination that both works and is tolerable is an important part of mental health treatment. When treatment is mandated by law, that just isn’t possible. Assuming that a person is incompetent and that their perceptions are irrelevant will not make that person want to participate in mental health treatment.

Another extreme measure proposed by Harris in her plan: weakening privacy protections afforded by the Health Insurance Portability and Accountability Act, better known as HIPAA. Currently, medical professionals are not legally allowed to share people’s treatment information without consent. Harris would allow health care providers to disregard the consent of their patients if they happen to think doing so is important.

Making rights provisional on the discretion of providers’ judgment will disproportionately impact women, young people, transgender people, and people of color and any permutations thereof — basically any of the people on the receiving end of well-documented health care disparities. Even the most well-intentioned doctors can make mistakes and are subject to bias. Privacy rights should not be a judgment call.

Allowing family members access to financial information would also gut privacy rights. Harris’s plan calls for making medical financial information available to family members. A young trans man named Jack, who asked to be identified by only his first name for privacy reasons, explained how such a policy would have prevented him from medically transitioning and potentially put his life at risk.

“Whether the reaction would be kicking me off the plan or kicking me out of the house, I don’t know,” he told Vox. But with the right to medical privacy, Jack was able to get the medical support that was needed. “I have friends who would lose their homes, their college funding, and potentially come into harm if their parents found out about their medication,” he said.

Leaders in the disability rights community have unequivocally condemned Harris’s plan. On her personal Twitter account, Autistic Self Advocacy Network executive director Julia Bascom described the plan as “the worst mental health platform I have read yet … This is a regressive and shameful proposal.”

Jennifer Mathis, a leader in the mental health rights legal community, told Vox she has “grave concerns about some of the plan’s provisions.” However, she ended her comment on an optimistic note: “I hope that the campaign will work with the disability community to revise the plan to address these concerns.”

With the disability community and activists pointing out the dangers in Harris’s plan, I too hope that her campaign will consider the values and policy goals of the people she is ostensibly trying to help. The current plan envisions an America where forced drugging and locked wards are positioned as freedom for people with mental health conditions. It is not an America I would like to live in.

Sara Luterman is a Washington, DC-based freelance journalist and commentator. She writes about disability politics, research, and culture. Her work has appeared in the Washington Post, Slate, the New York Times, and Undark Magazine, among other outlets. Follow her on Twitter.

The Keystone XL pipeline is dead. But the fight against similar projects is far from over.
Civil rights icon Rep. John Lewis has stage 4 pancreatic cancer
Andrew Cuomo is facing an extraordinary rebuke from his own party
Coronavirus: News and updates on new cases and its spread
How 1-800-Flowers.com became one of the biggest, clunkiest names in Valentine’s Day gifts
The US-China “Cold War” reaches Houston