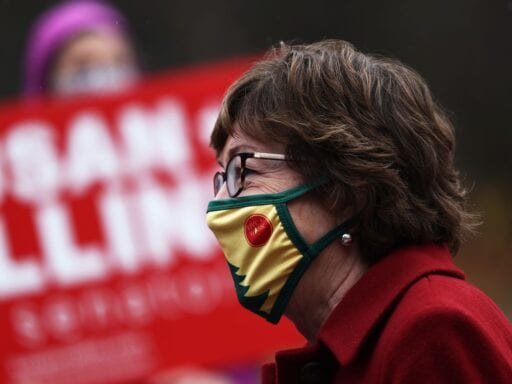 There’s a chance that one of the year’s most important Senate races could go to an instant runoff.

Maine’s unique system of ranked-choice voting, which the state adopted in 2016, could decide the race between longtime Republican Sen. Susan Collins and Democrat Sara Gideon, speaker of the Maine state House. It could also prolong the process, making it take days or even over a week to decide.

Polls between the two candidates have shown a tight race for months, with Gideon maintaining a slight lead. Still, recent state polls of the race show neither candidate getting 50 percent of the vote — the magic number to avoid activating the ranked-choice system (also known as an “instant runoff”).

Save for a September Quinnipiac College poll showing Gideon up 12 points that many in Maine politics believe was an outlier, other recent polls haven’t shown Gideon above 47 to 48 percent on the first round of voting, according to Colby College political science professor and pollster Dan Shea. Collins’s numbers in public polls have been slightly lower than Gideon’s.

If these numbers hold true on election night, “the issue is then where will the ranked-choice voting process leave us?” Shea said. He and other Maine politics experts think it could benefit Gideon, in large part because the next-highest-polling candidate after Gideon and Collins is progressive independent candidate Lisa Savage, who is currently polling around 5 percent. The other third-party candidate, conservative Max Linn, is polling closer to 1 percent.

“Is this a margin-of-error race? I think on the first run it probably is, but then when you add in the ranked-choice process, I think it’s probably Gideon’s to lose,” Shea said.

How does ranked-choice voting work?

Maine was the first state in the nation to adopt ranked-choice voting, passing it by ballot initiative in 2016. Massachusetts and Alaska voters are considering ballot initiatives to implement the system as well.

The best way to understand this voting system is by looking at a ranked-choice ballot. Here’s one from the 2011 Portland, Maine, mayor’s election.

Portland voters fill in the circles noting their first through 15th choices in 2011. (It’s worth noting that voters don’t have to rank every single choice on the ballot — they could still just choose one candidate and submit their ballot.)

If someone emerges from this system with more than 50 percent of the vote on the first round, they are declared the winner. But if no one gets 50 percent, it becomes a system of culling the lowest vote-getters one by one. The votes are essentially tabulated in multiple rounds. Once the least popular candidate is eliminated, their vote share goes to whichever candidate a voter listed as their second choice.

This vote counting and allocation goes on and on until someone gets a majority of votes — all the way until there are just two candidates left if necessary. That 2011 Portland mayoral election went for 14 runoff rounds to get to a winner with more than 50 percent of the vote … so, in other words, this process can take a long time. It shouldn’t take as long if the Senate race goes to a runoff, because there are only four candidates — but it’s still longer than a conventional winner-takes-all system.

Maine ballots are counted either by hand or by an automated machine. But with such a closely watched Senate race that could determine which party controls the chamber, town and city clerks in Maine have to be extra careful this year. Local officials are only able to declare winners who got above 50 percent; if no candidate gets to that threshold, all the ballots get transported to a secure location in the state capital of Augusta, where the vote tabulating starts.

It could be a lot of work just to collect all the ballots (Maine is a fairly big state with some very far-flung, rural towns) and get them to the capital. So counting everything to determine winners could potentially take days.

The 2018 midterms were the first elections using ranked-choice voting. In 2018, the process to determine a winner of Maine’s contested Second Congressional District was decided more than a week after Election Day. Democrat Jared Golden won that race, defeating the incumbent Rep. Bruce Poliquin (R) even after he was behind Poliquin in the initial vote tally. He won because Poliquin couldn’t make it to 50 percent on the first round, and Golden eventually accumulated more votes through the ranked-choice process.

Maine Republicans have tried to challenge the ranked-choice process in court but have gotten rejected by both the Maine Supreme Court and, more recently, the US Supreme Court.

The system is definitely here to stay for the 2020 election.