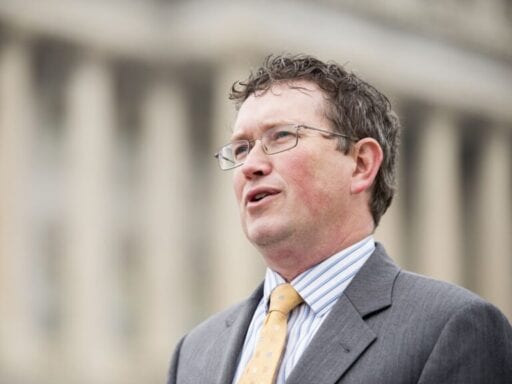 He may also have put more members of Congress at risk.

Democrats and Republicans on Capitol Hill and the White House can agree on one thing: how annoyed they are with Rep. Thomas Massie (R-KY).

That’s because the conservative Congress member from Kentucky nearly delayed the House’s passage of the massive $2 trillion coronavirus stimulus package meant to help Americans who’ve lost their jobs and industries that’ve been hit hard by the pandemic. And on top of that, he forced a number of lawmakers to fly back to the Capitol amid the current public health crisis.

Massie hinted to local radio station 55 KRC radio Thursday morning that he might object to a voice vote in the House — and confirmed that he would do so via a Twitter thread on Friday. The voice vote had been planned as a way to pass the bipartisan bill without having to call too many members back to DC, endangering them with travel during a global pandemic.

(1/11)I swore an oath to uphold the constitution, and I take that oath seriously.

In a few moments I will request a vote on the CARES Act which means members of Congress will vote on it by pushing “yes” or “no” or “present.”

“I’m having a really hard time with this. Because they’re saying, well it’s hard to travel, yadda yadda yadda,” Massie told the radio station. “Well, last night, 96 out of 100 senators voted. All we would need is 218 out of 435 to vote.”

The threat of Massie calling for a recorded vote and quorum abruptly changed the House’s plans. On Thursday, Democratic and Republican leadership alike suddenly called members back to Washington, DC. Several lawmakers took photos and videos of themselves preparing to drive back to DC or flying with other members on nearly empty airplanes. Some members from California and other western states caught red-eyes.

A bipartisan (and socially distanced) flight to DC this morning to vote on Coronavirus economic relief. @RepPeteStauber @RepAngieCraig @BettyMcCollum04 pic.twitter.com/8o48sSvYrW

Massie got plenty of blame from colleagues on both sides of the aisle who accused him of needlessly endangering the health of his fellow lawmakers, when the outcome of the bill’s passage would ultimately be the same. Lawmakers ultimately passed the bill by voice vote any way, but a quorum, or 216 members, needed to be present to move forward due to his concerns. (Congress already has several confirmed cases of Covid-19, the illness caused by coronavirus.)

Without referring to Massie by name, New York Republican Rep. Peter King called the actions of “one Member of Congress” “disgraceful” and “irresponsible.”

President Donald Trump also torched Massie on Twitter for threatening to hold up the bill, calling him a “third rate Grandstander” and a “disaster for America.”

…& costly. Workers & small businesses need money now in order to survive. Virus wasn’t their fault. It is “HELL” dealing with the Dems, had to give up some stupid things in order to get the “big picture” done. 90% GREAT! WIN BACK HOUSE, but throw Massie out of Republican Party!

Massie is a conservative and libertarian-leaning lawmaker who objects to big government spending. This is certainly not the first time he has tried to block legislation; in May 2019, Massie objected to a $19 billion emergency relief bill for states hit by hurricanes, floods, and wildfires going through on a voice vote — calling for a full vote of the House and delaying that bill’s passage.

The coronavirus bill is much larger, and an arguably more urgent situation.

Massie is capitalizing on House procedure

A big question that emerged as Congress considered this $2 trillion stimulus was how exactly lawmakers would be able to vote on it, since most House members had returned to their home districts.

Congress doesn’t allow remote voting (despite a push from California Reps. Katie Porter and Eric Swalwell to make an exception). So earlier this week, House leaders had announced that they would be taking a “voice vote,” which works a lot like it sounds: If more people vocalize their support for the bill on the House floor than those who do not, the legislation passes. (In effect, the louder group has it.) In the case of a voice vote, you don’t need a full quorum, and people’s individual votes are not recorded.

If the House were able to go this route, a couple members who were still in Washington could have quickly passed the bill while most lawmakers remained in their districts.

Any House member, however, can demand that a quorum, or majority, be present for a vote — and Massie did just that. Given his request, a majority of members, or 216 lawmakers, needed to be physically present in the House to move forward with the vote. Massie also tried to force a recorded vote, in which every lawmaker’s position is documented.

Massie argued that he wanted the quorum because it’s lawmakers’ constitutional duty to be physically present for these acts. There had previously been speculation about whether other lawmakers, including progressive Democrats, would push for a recorded roll call vote due to concerns about the legislation’s bailout money for corporations — but that didn’t wind up happening.

In trying to prove a point, Massie’s efforts discounted the unprecedented hazards posed by the coronavirus outbreak and the risks that members took by returning to the Capitol.

Update March 27 4:10 pm: This article has been updated to reflect the bill’s passage.

Driveways is a gentle masterpiece
What we know about a mass shooting in Nova Scotia, Canada
The EU and UK have extended make-or-break Brexit talks — again
Alabama legislators just passed a near-total ban on abortion
We might not know who won the California primary for days or weeks
Judge orders Johnson & Johnson to pay $570 million for role in Oklahoma’s opioid epidemic