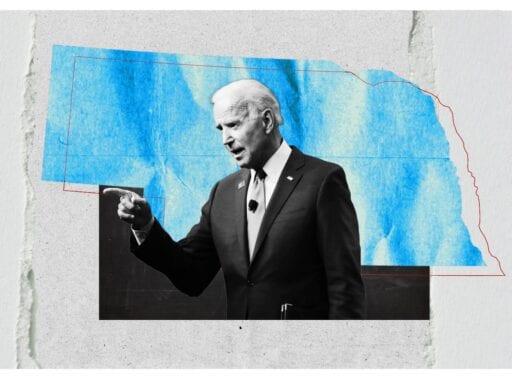 In a tight race, everything matters.

A single Electoral College vote for Democratic presidential nominee Joe Biden in Nebraska could wind up being a pretty big deal.

The former vice president has eked out a victory in Nebraska’s Second Congressional District, which will give him one vote of the state’s five Electoral College votes. The other four will go to President Donald Trump. As the race remains tight, everything counts, and this one electoral vote could be important.

My colleague Andrew Prokop explained how Nebraska’s Second Congressional District could make a difference as the presidential race plays out in the days to come. Biden’s likeliest path to victory has been and continues to be Michigan, Wisconsin, and Pennsylvania, all of which are still counting ballots. If he wins all three, he will likely win the White House. But if he loses Pennsylvania, he could still patch together enough Electoral College votes to win, including with Nebraska’s Second District. Per Prokop:

Crucial to Biden here would be winning Arizona and Nevada, neither of which has yet been called by Decision Desk. Biden is currently leading Arizona, but that lead may shrink as in-person Election Day votes are counted. Nevada hasn’t reported results yet: Democrats felt good about early voting numbers there, but Biden’s underperformance with Latinos in Florida and Texas has made some nervous.

There is perhaps a plausible path for Biden to lose Pennsylvania but win the presidency if he wins Arizona, Nevada, Wisconsin, Michigan, and the Second Nebraska District.

Nebraska’s Second Congressional District is in the eastern part of the state and includes the Omaha metropolitan area. In 2016, it went to Trump over Hillary Clinton, and it hasn’t swung Democratic since 2008, when it went for Barack Obama over John McCain. Despite Biden’s victory there this time, incumbent Republican Rep. Don Bacon was reelected to his seat.

Jane Kleeb, chair of the Nebraska Democratic Party, in a statement called the results a “transformative moment for our party, state, and nation.”

“Vice President Biden earned the trust of voters across party lines, and it is now our job to keep doing the work on the ground. Omaha is now Jomaha,” she said.

Paul Landow, a political science professor at the University of Nebraska at Omaha, told the Omaha World-Herald that Trump struggled to connect with Omaha’s urban and suburban voters. “Biden’s been leading this thing for a long time,” he said. “He held his lead, the enthusiasm for Trump just wasn’t there.”

To be sure, this one district won’t tell us the outcome of the election, and there are a lot of potential maps flying around and projections of plausible paths out there. But Nebraska’s Second Congressional District’s single Electoral College vote could swing the election to Biden in the event of a 269-269 tie.