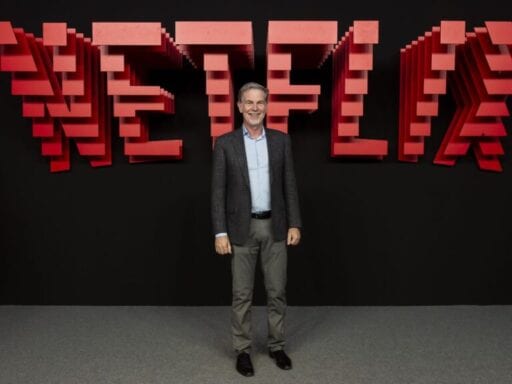 It’s one of the stories in our new Land of the Giants podcast, out now.

It’s basically a requirement for any company — and especially for tech companies in the last few decades — to boast about having a unique culture and corporate values.

That doesn’t mean those things have much to do with the way the company operates.

Netflix, for better or worse, is different: The leaders of the streaming company take their culture very, very seriously. They credit it with the success they’ve had upending the media world and forcing giants like Disney, Apple, and AT&T to chase after Netflix. They expect its 7,000 employees to take it seriously, too.

And so for the first episode of Land of the Giants: The Netflix Effect — our new seven-part podcast about the company and the impact it has made on Hollywood and the world — we wanted to dive into Netflix’s culture.

The company was happy to talk about it. Netflix has long been known for its “culture deck” — a slideshow about its HR philosophy it made public years ago and that has been broadly influential in the startup world.

And CEO Reed Hastings has a book — No Rules Rules — coming out this fall about Netflix’s culture. He thinks you may want to run your company the way he does.

When we told people outside of Netflix that we were making an episode about the company’s culture, we often got blank looks. But when we told current and former employees about our plan, they got excited. Netflix can be a weird place to work, and most people who don’t work there don’t get how weird it is.

For instance, Netflix uses its own cult-like language, like “keeper test” and “sunshining.” It also pays employees top-of-the-market salaries and gives them perks like the absence of an expense policy — employees are just supposed to use common sense. And it encourages workers to meet with recruiters from other companies so they can figure out what the top pay is for their position.

The company also tells employees that they should think of themselves as members of a pro sports team, not a family. Which means they should expect to be replaced by better performers for their spot if Netflix can find them. And it often goes out of its way to tell employees when a coworker has been dismissed and why.

The downside of that kind of intensity and pressure can be employees who feel overwhelmed and insecure. Wall Street Journal reporters Shalini Ramachandran and Joe Flint did an excellent job in 2018 of documenting the difficulty some Netflix employees had with the company’s culture, which the Journal characterized as “ruthless, demoralizing and transparent to the point of dysfunctional.”

The upside is a company where employees feel they have meaningful autonomy about the way they work, and the power to get things done.

One of Netflix’s overarching tenets, for instance, is “freedom and responsibility” — the ability to make decisions on your own, with accountability. Chief Content Officer Ted Sarandos said that’s what enabled him to lead a pivot into original content in 2011, by spending $100 million for two seasons of House of Cards, sight unseen and without permission from his boss.

“I told Reed about the deal after we did it,” Sarandos told us.

Another tenet — “farming for dissent” — came out of one of the company’s biggest failures. You might remember it as a punchline: Qwikster.

The short version: In 2011, Hastings wanted to move his company from its core DVD-by-mail service to online streaming, which was growing quickly but was still a smaller part of his business. So he tried splitting Netflix into a DVD business and a streaming business named Qwikster. Which meant that if his customers wanted the same services they were already getting before, they would have to subscribe to both and end up paying 60 percent more.

Netflix veterans still wince about the experience: The company was skewered on social media and by SNL. Its stock dropped 70 percent, and more than 700,000 people canceled their subscriptions.

Eventually, Hastings admitted that Qwikster’s name, the price hikes, and the way the company talked about it all had been a huge blunder. He rolled back the changes.

But in Hastings’s narrative, the failure was useful for Netflix’s culture. He thinks that many of his top employees could have told him he was wrong but were too afraid or at least too in awe of their CEO’s former successes to say anything.

“Everyone knows the tale of the self-absorbed, arrogant CEO who doesn’t listen. And there’s an element of that, because we have been so successful at so many things before that,” Hastings told us earlier this year at Netflix’s offices in Los Angeles. “But the more subtle one is that I had been so successful before that most of the executives thought … ‘But Reed has been right on so many things. I’ll bet he’s right on this one. And I’m just not seeing it.’”

After the debacle, Hastings instituted “farming for dissent,” a formal practice where employees are supposed to run their big ideas by colleagues and have them tell you candidly — on a Google Doc that’s open for everyone to see — what’s wrong with it. It’s considered integral to the company that your coworkers tell you what they really think of your idea, even if — perhaps especially if — you’re their boss.

So if that’s the kind of thing you’d like to hear more about, you’re in luck: We’ve got a whole episode you can listen to right now.

And we’ll have six more, covering everything from Netflix’s battle with Blockbuster Video to the way it uses its famed recommendation algorithm to the way it has remade Hollywood, coming up. Please tell us what you think: We’re on Twitter at @ranimolla and @pkafka.

Subscribe to Land of The Giants on Apple Podcasts, Google Podcasts, Spotify, Stitcher, or wherever you listen to podcasts.

Super Typhoon Yutu, the strongest storm of the year, just hit US territories
May’s solidly meh jobs report
The Assistant is a movie about more than Harvey Weinstein. It’s about the system around him.
Americans have been shockingly good at getting their second Covid-19 shot
The push to unionize cannabis workers, explained
Here’s how tickets were allocated for the South Carolina Democratic debate