How Oprah Winfrey became our interviewer in chief 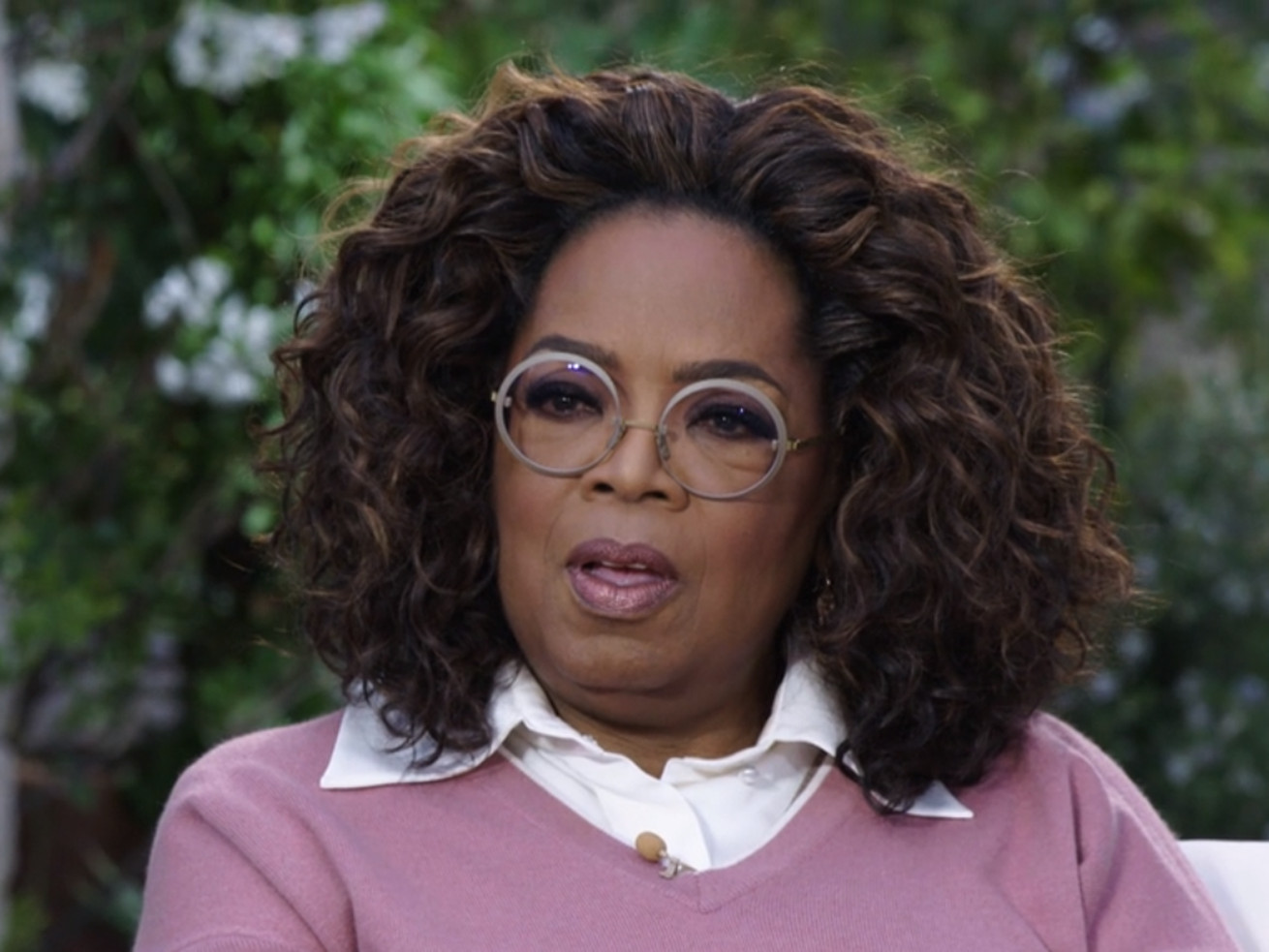 She was the only person who could conduct the Harry and Meghan interview.

There was a moment in Oprah Winfrey’s landmark interview with Harry and Meghan, Duke and Duchess of Sussex, that made the host’s jaw drop.

Meghan explained there had been “concerns” within the royal family about the skin color of her and Harry’s first child, Archie, who was born in 2019. Oprah was visibly shocked. And the moment captures everything that is good and bad about the veteran media personality’s interview style.

You can watch Oprah’s reaction here:

Oprah reacts to Meghan Markle revealing somebody in the Royal Family was concerned about how dark Archie’s skin color might be. pic.twitter.com/RIc15Adr7F

To be clear, her approach is exactly the right one. She gives Meghan lots of space to process her feelings, while Oprah conveys her own empathy and shock at what Meghan has just said. Oprah mostly reacts non-verbally, leaving Meghan room to say what she needs to say. And even if Meghan doesn’t ultimately reveal the name of the person or people who worried about the potential darkness of Archie’s skin, you can assume it’s someone with a lot of power.

In the 21st century, Oprah Winfrey has become the latest in a very specific line of American TV personalities: the interviewer celebrities go to when they have some Shit to Say. Past figures who have filled this role have included Barbara Walters and Edward R. Murrow. Tom Cruise hopped on Oprah’s couch (to prove he was likable!) in 2005. Whitney Houston told her everything in 2009. Lance Armstrong came clean to her in 2013. And she arguably gave Barack Obama a huge boost in the 2008 Democratic primary, after she interviewed him on her talk show in 2006 and endorsed him before he even announced his candidacy; she would go on to interview him again in 2011 when he was the sitting president, and she had another high-profile interview with him just last year.

But what’s impressive about Oprah, specifically, is the way she has maintained her go-to interviewer status throughout an era when the rise of streaming networks means that broadcast television has less of a daily presence in American life. The draw of the Meghan and Harry interview was the royals, for sure, but Oprah’s presence added both legitimacy and the sense that something big would happen.

That quality is invaluable to people like Meghan and Harry, who want to ensure their message reaches the widest possible audience. It’s also invaluable to a network like CBS, which aired the interview during primetime on Sunday night and which still has a much larger potential reach than even the biggest streaming services. (Netflix has just under 74 million American subscribers; CBS is freely available to all US citizens, at least in theory, even those who don’t have cable, because you can watch it with an antenna over publicly owned airwaves.)

Oprah excels at creating a friendly, warm atmosphere in which famous people feel as though they can share their innermost thoughts. It’s not clear how much the Meghan and Harry interview happened roughly as presented on television, or if it was edited to create a more coherent progression of its subjects’ thoughts. (Obviously, all interviews are edited to remove filler and false starts.) But Oprah’s genius lies less in the overall scope of an interview (though she’s also good at that) and more in the micromanagement of individual moments. An interview subject can say something shocking, and Oprah is skilled at guiding the exchange so that it plays out to its fullest effect, while giving the subject space to process their thoughts and decide whether they want to share more.

Much of that surely stems from her many years as a talk show host. The Oprah Winfrey Show aired almost every weekday between 1986 and 2011, a 25-year run that saw Oprah become the most successful talk show host of her era. Hosting a daily talk show builds up a skill set that involves listening just as much as it does asking questions, and it involves finding a way to listen that conveys empathy to both the interview subject and the audience at large.

There’s no one right way to be an effective listener on camera. David Letterman, who is just as interested in making his own jokes as he is in what his interview subject is saying, is also a great interviewer; his approach relies on those jokes, which function as a pressure release valve and give the subject space to process their thoughts and decide whether they want to share more. But Oprah’s interview style has much more in common with Walters’s and Murrow’s. All three ask probing, thoughtful questions that then leave their subjects room to feel things and speak more openly about what they have experienced. All three are masterfully patient and very good at making the kind of thinking face that signals to viewers at home that it’s time to pay attention.

Notably, all three of the interviewers I’ve mentioned — and others who fit this general style, like journalists Mike Wallace and Katie Couric and late-night host Craig Ferguson — come from very different TV traditions. Murrow was a hard-nosed newsman who could pivot nimbly to interviewing the rich and famous, before switching back to grilling the powerful, while Walters excelled at celebrity interviews specifically. Oprah’s talk show helped her develop the skill of talking to regular people, from a variety of backgrounds, which she has since parlayed into talking to celebrities as if they were just normal folks.

But I think the clip of Meghan and Oprah also shows the core flaw in this more patient approach: It’s really dependent on how forthcoming the subject is. Meghan wants to tell a hard, painful, horrible story, and Oprah is ready to let her do just that. Because Meghan’s story is so compelling, Oprah is able to just get out of the way and let the story be the story.

In situations where a heavier touch is required, this approach weakens. Oprah is capable of harder-edged questioning, as when she pushed back against James Frey, whose supposed memoir A Million Little Pieces turned out to be partially fictional, in 2006. Yet the reason she was pushing back against Frey was that she’d chosen his book for her book club and had him on the show months earlier to celebrate his work without much in the way of questioning, even though there were plenty of reasons to question Frey’s story. (It wasn’t on Oprah to uncover Frey’s fabrications and falsehoods — that would be more the responsibility of his publisher — but the debacle shows the limits of taking an interview subject at face value.)

This is all to say that celebrities sometimes turn to Oprah because her interview style begins from a point of credulity as the default. If that credulity is shaken, she will push a famous subject to further explain themselves. But that credulity also requires giving interview subjects the benefit of the doubt in ways that can backfire. After all, Oprah’s program increased the national prominence of the controversial Dr. Oz, and her company co-produces his talk show.

Oprah’s chumminess with her subjects also creates a scenario where, say, she is also working with Harry to produce a docuseries about mental illness for AppleTV+. She also attended Meghan and Harry’s wedding as a guest. Oprah brought up both of these potential conflicts of interest in passing within the interview, but such relationships might rouse skepticism in viewers who are looking for impartiality.

And yet Oprah’s interviews are almost always watchable TV, and sometimes, they break big news, as happened during her conversation with Meghan and Harry, which has created a PR nightmare for the British crown. I don’t know that I would want Oprah pressing President Joe Biden on his policy proposals, but she’s the right choice for a moment when a very famous person has a very tricky story to tell. And more importantly, her status, her skill, and her long history of being great on television made her maybe the only person in the world who could have risen to Meghan and Harry’s challenge.