How robots are transforming Amazon warehouse jobs — for better and worse 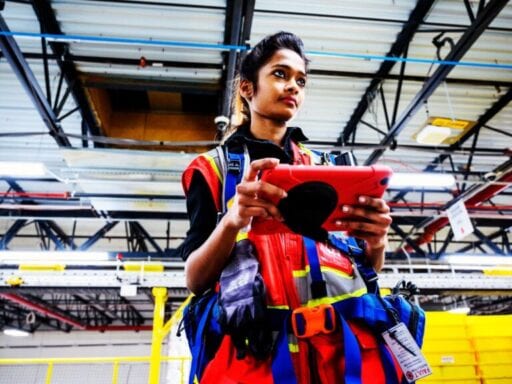 Amazon is leading a robotics race that will have a seismic impact on the warehouse industry, which employs more than 1.1 million Americans today.

When the tech industry has come up in the 2020 Democratic presidential debates, the most important discussion topic hasn’t been about breaking up the tech giants; it’s been about the automation of jobs and the massive impact this is expected to have on the US labor force.

At the center of this debate is Amazon, a company that employees hundreds of thousands of employees in its massive warehouse network, which is also a company whose investment in robots and other automation technologies means it could one day be a huge job eliminator, too.

In 2012, Amazon spent $775 million to purchase a young robotics company called Kiva Systems that gave it ownership over a new breed of mobile robots that could carry shelves of products from worker to worker, reading barcodes on the ground for directions along the way.

But it also gave Amazon the technical foundation on which it could build new versions of warehouse robotics for years to come, setting the stage for a potential future where the only people inside Amazon’s facilities are those employed to maintain and fix their robotic replacements.

Today, Amazon has more than 200,000 mobile robots working inside its warehouse network, alongside hundreds of thousands of human workers. This robot army has helped the company fulfill its ever-increasing promises of speedy deliveries to Amazon Prime customers.

“They defined the expectations for the modern consumer,” said Scott Gravelle, the founder and CEO of Attabotics, a warehouse automation startup.

And those expectations of fast, free delivery driven by Amazon have led to a boom in the retail warehouse industry, with entrepreneurs like Gravelle and startups like Attabotics attempting to build smarter and cheaper robotic solutions to help both traditional retailers and younger e-commerce operations keep up with a behemoth like Amazon.

This robotics race — led by Amazon — will have a seismic impact on the warehouse industry, which employs more than 1.1 million Americans today. And the rise of these artificially intelligent robots means there’s likely a day coming when these warehouse robots will be capable of replacing just about every human task, and human worker.

“The thing that really makes us unique as human beings is our ability to solve problems,” Martin Ford, author of The Rise of Robots, told me this summer for an episode of the Land of the Giants: The Rise of Amazon podcast. “Machine learning and related technologies are for the first time allowing machines to do that and to compete with that capability. That’s really kind of a game-changer.”

In the meantime, robots have the potential to eliminate some of the most menial warehouse labor, as evidenced by the Amazon robots that now transport products across massive warehouses in place of workers who used to be forced to walk the equivalent of 10 or more miles a day.

That sounds like a good thing, but new research indicates these robots may be increasing worker injury rates, even though they’re taking on some of the hard labor.

Here’s a look at the good and the bad of the rise of robots inside of Amazon, and a peek ahead at where this is all headed.

If you’ve heard stories of Amazon warehouse workers walking 10 to 20 miles a day on hard concrete floors, well, they’re true. But in newer warehouses outfitted with robots, much of that walking has been eliminated.

“Walking 12 miles a day on a concrete floor to pick these orders. … If you’re not 20 years old, you’re a broken person at the end of the week,” said Marc Wulfraat, founder and president of the supply chain consultancy MWPVL International.

The type of employees that used to do the walking — some called “stowers,” others called “pickers” — now remain stationary, standing at their own work stations, with cushion pads beneath their feet, if they are working in one of the robotic warehouses.

Stowers in older Amazon facilities used to walk up and down long aisles pushing a cart full of products, placing them randomly on shelves where they found space, and scanning them with a handheld device to mark their location in a system.

Now Amazon robots carry empty shelving units — known as pods — to the workstations of stowers, who take products placed in front of them and fit them into open shelf space inside the shelving pods.

When the pod is full, the stower presses a button that sends the robot and attached shelving unit rolling across a caged-in area of the warehouse, and eventually to the workstation of a “picker.”

Like stowers, pickers in older facilities walked miles on end each day, plucking a product off a shelf, scanning it, and placing it into a cart they pushed the whole way. But, they, too, now remain standing at their own workstation in Amazon’s robotic warehouses, plucking items off of shelving units that robots carry right to them.

“Having a rubber mat, where goods come to you, is three times more productive than the traditional approach and it is more humane on the people who work in these fulfillment centers,” Wulfraat said.

An Amazon spokesperson said these new technologies help the company store up to 40 percent more inventory in their warehouses, and that they make employees’ jobs easier.

So along with the drive to automate more warehouse tasks, comes much higher expectations for workers.

“The robots have raised the average picker’s productivity from around 100 items per hour to what Mr. Long and others have said is a target of around 300 or 400, though the numbers vary across teams and facilities,” the New York Times reported in July.

An Amazon spokesperson did not comment on the specific goals, but said the company provides coaching to those struggling to meet goals.

The new targets, though, mean that workers are allowed just a handful of seconds between each product task, which can be complicated by the 8-foot-tall shelving units that the robots carry to the stations of pickers and stowers, Wulfraat said. Because of that height, each worker has a stepladder that they occasionally need to ascend to place or retrieve products from the top row of the shelving units.

“Workers who stow items are supposed to keep lightweight products at the top or bottom of the pod and heavy products between the chest and the knees,” Wulfraat said. “But it’s not possible to adhere to this when the work is happening so fast and people are under the gun, so people take safety and ergonomic shortcuts out of necessity.”

Such shortcuts mean that the pickers on the receiving end have to sometimes carry heavier-than-designed items down the steps of their stepladder, resulting in a “higher probability” of injury, according to Wulfraat.

A recent investigation by the Center for Investigative Reporting’s Reveal group, and published in the Atlantic, appeared to show that the rate of worker injuries at Amazon’s robotic warehouses is in fact higher than those facilities in which robots are not in use.

“Of the records Reveal obtained, most of the warehouses with the highest rates of injury deployed robots,” the piece read.

“After Amazon debuted the robots in Tracy, California, five years ago, the serious-injury rate there nearly quadrupled, going from 2.9 per 100 workers in 2015 to 11.3 in 2018, records show,” the piece added.

The Amazon spokesperson said in an email that the health and safety of Amazon employees is a top priority, and listed several initiatives to try to back that up. She also said Amazon is more aggressive than others in the industry when it comes to documenting injuries, insinuating that’s why Amazon injury rates may be higher than industry norms.

Still, experts who study the robotics industry and its impact on workers fear that the squeezing of human workers is a feature — not a bug — of this period bridging workplaces to a fully-automated future.

“The kind of efficiency that Amazon has to have in order to operate the way it operates now and also to do what it wants to do in the future. … They’ve got to get more and more efficient,” Ford, the author, said. “Now as long as people are still part of the loop, what that means is that the whole system has to effectively come under more and more algorithmic control.”

He continued: “So in a sense, if you’re one of these workers in that environment, you’re truly just going to be kind of a cog in the machine. You’re gonna be sort of a plug-in neural network as a human being that is performing some tasks that right now the robots can’t.”

Amazon continues to add versions of the original Kiva robots to more and more fulfillment centers. At the same time, the company works on new robotic inventions to handle new tasks inside its facilities.

Reuters reported in May that Amazon was rolling out automated packing machines in some of its warehouses.

The company has also started introducing new mobile robots — similar in appearance to the original Kiva ones — to shuttle packages around inside sortation centers, which are mini-warehouses where packaged customer orders are sorted by geographic destination.

In these same facilities, Amazon is also experimenting with giant robotic arms that would place the ready packages onto the mobile robots.

All the while, Amazon continues to chase the Holy Grail of warehouse robotics: a robot that can grasp a wide range of merchandise types — with different shapes, sizes, and form factors — with a level of dexterity that’s similar to what the human hand can do.

A company spokesperson confirmed that it’s an area that Amazon is interested in and continues to research.

Such an invention, though, could mean Amazon would need fewer workers working as pickers and stowers, too.

In past years, Amazon has sponsored a contest where robotics teams from around the world have competed to create the best robot picker. More recently, Amazon has decided to fund research from external teams instead of hosting the event.

CEO Jeff Bezos said earlier this year that the robotic grasping problem will be solved in the next decade. But some logistics and robotics experts think that certain types of Amazon merchandise could be picked by robots years sooner than that.

And Amazon has indirectly hinted at this, too. This year, the company announced plans to “upskill” 100,000 of its US employees, including warehouse workers. A spokesperson said that as a top US employer, the company feels a responsibility to help employees develop new technical skills to move into better-paying jobs.

In a press release, Amazon cited a “changing jobs landscape” as the impetus for the job-training push.

It could have easily used the word “automation” instead.

Kamala Harris officially accepts the Democratic vice presidential nomination and makes history
The relatable toughness of Jill Biden
The Hollow Middle Class
The race for presidential delegates has begun. Track them here.
98,000 new Covid-19 cases. And the worst may be yet to come.
Alexander argues it’s important to weigh Trump’s wrongdoing against his accomplishments