How Rodney Dangerfield and “Caddyshack” gave us Donald Trump 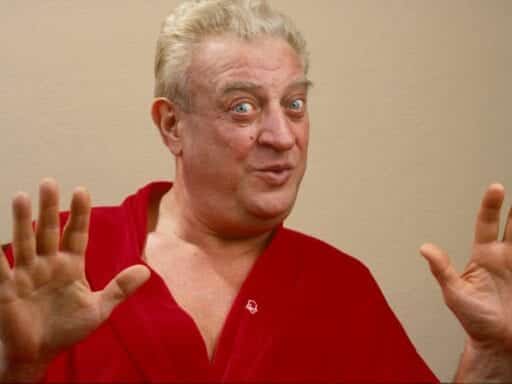 What does Caddyshack, the 39-year-old Bill Murray movie about hijinks at a country club, have to do with politics in 2019?

And what does the New York Times’ chief television critic have to say about politics in 2019?

Quite a bit. You can read some of it in his Times columns, where he frequently writes about election debates, presidential press conferences, and congressional hearings through the lens of a professional TV watcher. He’s exceptionally insightful about the way modern politicians use TV and vice versa.

And now you can also read Poniewozik in book form, where he zeroes in on the politician who uses TV to great effect and vice versa: Audience of One is a smart look at the way TV has shaped Donald Trump over decades and how Trump has mastered the medium.

Which brings us back to Caddyshack, and specifically to Rodney Dangerfield’s character in that movie: a super-rich, charismatic boor who upsets the country club’s elite members.

Yes, Caddyshack is a movie, not a TV show, but allow Poniewozik a little latitude to make his point: He argues that different tropes, characters, and themes that ascended in pop culture for the last four decades either influenced Trump directly or made the culture more receptive to Trump. And Caddyshack happened to come out in 1980, the same year Trump started becoming a national TV figure, via a Tom Brokaw interview on the Today show.

Again, if you’ve seen Caddyshack, it only takes a second to realize the connection between Dangerfield’s Al Czervik and Trump, once Poniewozik points it out: Trump leans very hard into the idea that he’s a populist billionaire, sucking down Big Macs on his private plane and dumping ketchup on the steaks he orders well done at his own hotels. That kind of character can be very appealing — especially when he riles up elites.

In 1980, you would never have pegged Rodney Dangerfield as the template for the president of the United States. In retrospect, it seems almost inevitable.

Poniewozik talked to me for a recent episode of Recode Media. You can read an excerpt of our conversation below and listen to the entire chat here.

Al Czervik, who Rodney Dangerfield plays, is this obnoxious, boorish rich guy who all the other stuck-up rich people at the country club hate.

He’s probably richer than the other people at the country club.

He is definitely richer than the other people at the country club, and this gives him the freedom not to care about them. It gives him this liberating — and this is what made him run away with the movie — this liberating thing of … I don’t know if I can swear on this podcast.

He has “fuck you” money. Right? That’s the dream. I can have all this money and I can be myself.

Dress how I want.

I can dress how I want. I can keep my own habits. I don’t have to put on a show for anybody. Who gives a crap what you think about me?

I offend your sense of decorum and I enjoy it.

Yeah, exactly. I’m going to get the biggest, grossest yacht and just tear through the water on it and splash water all over your christening ceremony for your nice, little sailboat.

And, you can’t kick me out of your club because I’m richer than you.

Exactly. His character is opposed, in the movie, to Ted Knight’s character, Judge Smails, who is the stick-up-his-ass, uptight rich guy who runs the country club and cannot stand him. This all came to mind, I think, during the 2016 debates, when I’m watching Donald Trump in action in the debates and seeing him go up against Jeb Bush.

Donald Trump is a pop culture figure. He has lived in pop culture all of his life. I’m not saying that he sat down with a notebook and he plotted all this out. But these archetypes come to him because archetypes are how leaders and candidates in politics tell stories. He’s like the Clampetts against Mister Drysdale. He’s Rodney Dangerfield against Ted Knight. It’s the rich guy that you want to be against the fucking snobby rich guy that everybody hates.

Particularly, in the Republican primary — when Mitt Romney came out against him in March 2016 — he played that up to the hilt. I think what a lot of the people who were attacking him within the Republican party, and a lot of the people, including people in journalism, as well as politics, thought, “Well surely, Donald Trump may be leading the polls, but he’ll never actually win.” I think what they didn’t see was that there were these powerful pop cultural archetypes that he was playing into that put this audience on his side, precisely because of the things that outraged them.

They/we were all identifying him as Ben Carson, or any other Republican fringe candidate that had become popular briefly in the past and then eventually flamed out. We didn’t see that this is a really deep popular American archetype.

Yes. One thing that I really try to avoid doing as a critic, and even before I wrote this book, is … I try to avoid the simplistic thinking that pop culture brainwashes people. You know, “violent culture makes people violent,” etc. Or, “reality TV makes people conservative; The Apprentice made people vote for Donald Trump,” etc.

I think these facts are all complex. But, what this is here, and what I think is extremely powerful — and all politicians work in this system, whether they know it or not — is that these archetypes exist there. These stories are powerful because they’re metaphorical, and metaphors are more powerful than literal speech because they say more than literal speech in a smaller amount of time. You can use these types once they’re created, once they’re out there in the culture, to tell your story.

Burnt radio stations and 18-month newsprint blockades: Inside the slow culling of Nicaragua’s free p...
This is the math that made Katherine Johnson — one of NASA’s “Hidden Figures” — a legend
3 countries that financed a global coal boom are starting to pull their money
Trump’s coronavirus poll bump, explained
Did impeachment weigh on Trump’s Soleimani decision? Maybe.
“America First, but on steroids”: What Trump’s second-term foreign policy might look like