How Russian hackers stole information from Democrats, in 3 simple diagrams 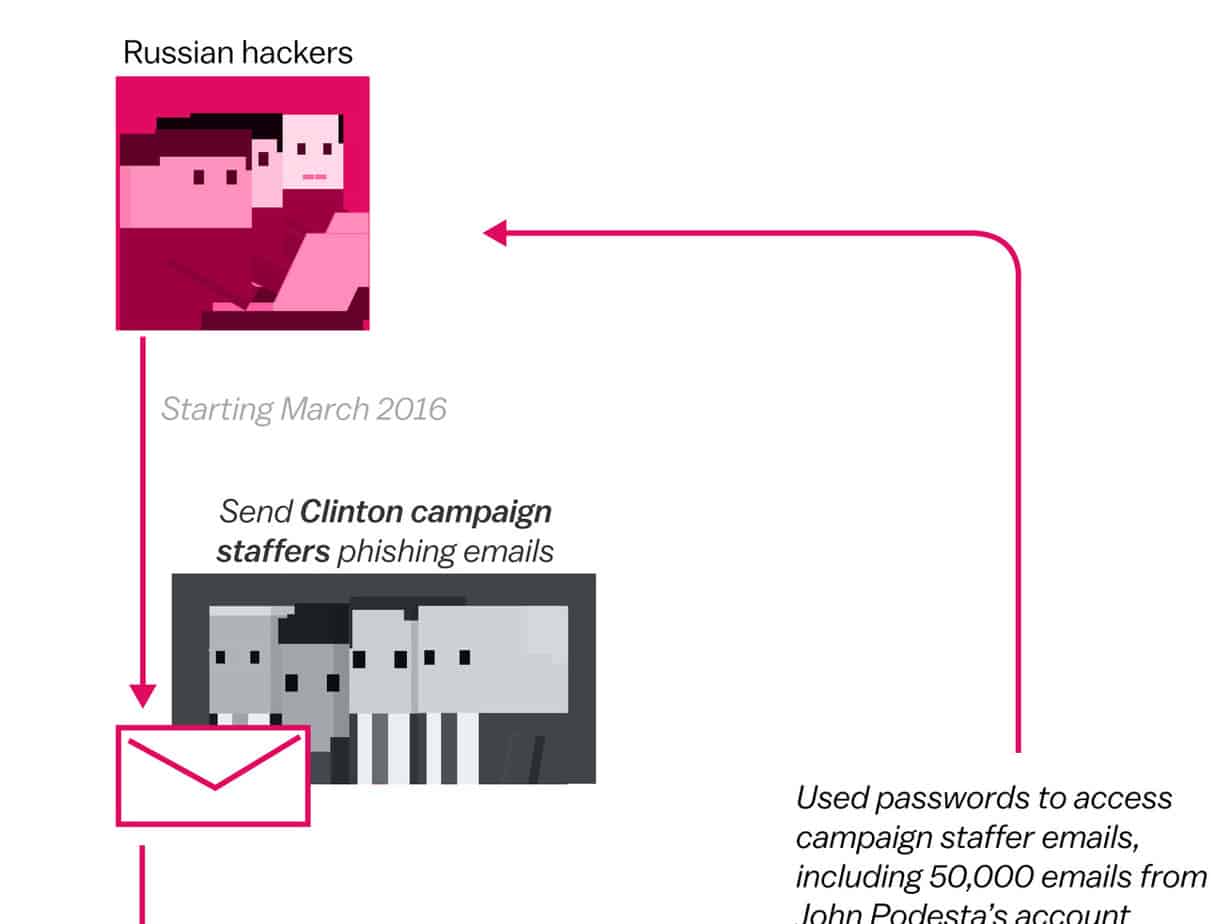 Trump refused to say Russia interfered with US elections. These diagrams show exactly how it did.

President Donald Trump said he doesn’t “see any reason” why Russia would be responsible for interfering in the 2016 presidential election. After all, Russian President Vladimir Putin denies Russia’s involvement — and, being a friend, Putin even offered to help investigate whoever committed these crimes.

That’s what the two men said during their joint press conference, but that version of the story contradicts what US intelligence agencies have concluded.

In fact, just days ago, we got an extremely detailed account of how Russian intelligence officers stole information from key Democratic groups during the 2016 presidential election. The hack was described in FBI special counsel Robert Mueller’s indictment against 12 Russian intelligence officers. The indictment describes how these hackers stole information from the DCCC, the Democratic National Committee, and several members of the Hillary Clinton campaign — and how they subsequently distributed the information to hurt Clinton’s chances against her opponent, Donald Trump.

The indictment confirms what had long been suspected: that Russians were behind the hacks, and that the information that came out of the hacks was leaked to hurt Clinton. It describes a confusing tangle of actors and actions that might be hard to sift through. Here are three simple diagrams to help you understand how Russian intelligence officers infiltrated key Democratic groups and the Clinton campaign.

How the Russians hacked the Clinton campaign

The first hacks detailed by the indictment were of key members of the Clinton campaign; they started in March 2016.

And the method was incredibly basic: email phishing.

All of us have probably been targeted by these scam emails, which try to trick us into sharing sensitive information, like passwords. The scam that Clinton campaign chair John Podesta fell for was the classic “reset your password” email. Another phishing email involved a fake Excel file, which when opened by the recipients eventually directed them to a Russian-created website that also tried to steal their information.

How the Russians hacked the DCCC and DNC

According to the indictment, they connected to both groups’ networks to install malware on their computers. This malware, X-Agent, is a computer program that tracks a user’s activity by logging the keystrokes of everything typed on these devices, as well as taking screenshots.

They harvested everything, including email passwords, opposition research, staff communication, personal banking information of staffers, and a folder about the Benghazi investigation.

Then they tried to cover their tracks while they sent the information from the DCCC and DNC back to the servers leased by GRU, which is Russia’s intelligence agency.

How the Russians distributed the stolen information

In June 2016, the Russians first released the information using the website DCLeaks.com and associated social media accounts. When the DNC said it was hacked by Russians, a person going by the moniker “Guccifer 2.0” claimed credit for the leaks, saying he was a lone Romanian hacker. The indictment says the people behind this moniker were actually the Russian hackers.

Using this persona, the hackers were in contact with US reporters, people close to the Trump campaign, and WikiLeaks.

WikiLeaks told Guccifer 2.0 to send “any new material” so they can ensure it will “have a much higher impact than what you are doing.” Then WikiLeaks said it would be best to release the leaks during the Democratic National Convention, in hopes of further sowing discord between Clinton and Bernie Sanders supporters. In July 2016, WikiLeaks began publishing the leaks.

Putin tried to say the hacks weren’t committed by the Russian state. US intelligence agencies disagree — but Trump does not.

After Trump complained about Clinton’s servers, rather than admonish Russia’s role in the hack, Putin added this:

But an Office of the Director of National Intelligence report using intelligence from the FBI, CIA, and NSA concludes with “high confidence” that “Russian President Vladimir Putin ordered an influence campaign in 2016 aimed at the US presidential election.”

In short, top US intelligence agencies say Putin ordered this interference, and Mueller’s indictment details the nuts and bolts of how this happened.

But President Trump, standing next to Putin, decided to attack the FBI’s credibility and Hillary Clinton, and brag about how he won the election because of a brilliant campaign.