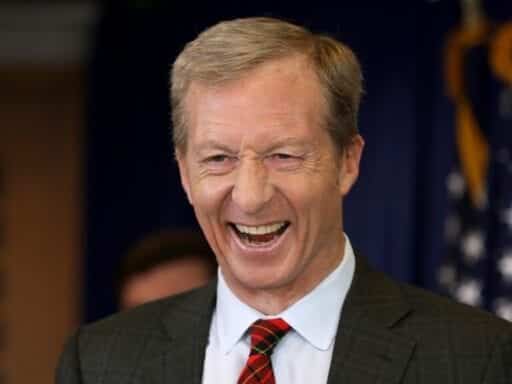 The Democratic presidential candidate appears on pace to fulfill the Giving Pledge. Maybe.

Tom Steyer does everything really big.

That is one inescapable conclusion to be found in 10 years of tax returns released by the San Francisco billionaire and 2020 Democratic candidate on Thursday, which offer a revealing window into how the wealthiest Americans spend their money. That wealth has allowed Steyer to accumulate enormous political and philanthropic power — the very type of power that’s come under more scrutiny than ever in Democratic politics.

It isn’t every day that we gain visibility into the complex business, political, and philanthropic ties of the country’s 1 percent, but it isn’t every day that one of them runs for president. And because he is following tradition to release his tax returns, Steyer is offering us that rare glimpse — especially since President Donald Trump, another billionaire, has repeatedly declined to release his own tax returns.

Forbes estimates Steyer’s net worth is $1.6 billion, but observers widely view that figure as conservative and estimate that his real net worth is significantly larger. Steyer, who made his fortune at his hedge fund, is perhaps the wealthiest person ever to run for president.

One reason the exact figure matters: Steyer has often discussed his signing of the Giving Pledge, a public declaration that he would give at least half of his money to charity either during his lifetime or in his will. But half of what figure? The pledge — which is already nonbinding — doesn’t spell out that effective date exactly, giving megadonors a great amount of wiggle room and fueling the perception that the pledge is ultimately meaningless.

We’ve seen this phenomenon play out with many of the country’s wealthiest people. Some of the megarich are becoming so wealthy so quickly that they literally cannot give money away quickly enough to satisfy the spirit of the Giving Pledge. Tech wealth in particular has exploded over the past decade, as the value of companies like Google and Amazon skyrockets and makes billionaires even richer.

Steyer and his wife, Kat Taylor, were among the first billionaires to sign the agreement in 2010, when their net worth was about $1.3 billion. The records Steyer released on Thursday show he and his wife have donated $190 million to charitable causes between 2009 and 2017 to charities.

If his effective net worth registers between $1.3 billion and $1.6 billion, the couple is on pace to fulfill their Giving Pledge commitment in the next 20 to 30 years. That’s a reasonable time frame given that Steyer is also almost certain to include some charity in his will.

So Steyer does appear to be taking philanthropy and the Giving Pledge commitment seriously.

But if the billionaire is now worth significantly more — and if honoring the Giving Pledge means that he should have given away half of his net worth by the time he dies — then he is significantly behind.

What Steyer does not include in his philanthropic push are the millions he’s sunk into politics over the past decade.

“Tom and Kat do not count any of their political contributions as part of their Giving Pledge promise to give away the majority of their wealth to charitable pursuits during their lifetime,” his campaign said in a statement.

But the new tax records offer the most complete portrait yet of just how much Steyer, the biggest Democratic donor in recent cycles, has sunk into these political advocacy efforts.

He spent about $365 million on political activities between 2009 and 2017, the returns show, an enormous amount even before you include the at least $65 million that Steyer spent in 2018 backing his groups advocating for impeachment and solutions to climate change. That fortune cements his stature as the country’s top liberal donor, and is also a vivid reminder of just how much he sticks out in today’s Democratic primary, which is so concerned with the growing influence of people like Steyer that some candidates have ruled out high-dollar fundraisers altogether.

Steyer has pledged to spend $100 million on his presidential campaign, a sum that could almost certainly impact the race at the margins, which are ultra-slim in a 20-candidate race. Since entering the campaign this summer, Steyer has consistently spent more than any other candidate each week on Facebook and Google advertising, ads that have helped him earn 2 percent in multiple polls — results that make it likely that he will qualify for the October presidential debate (even though he barely missed making the September one.)

That amount of spending has fueled rhetoric from candidates ranging from Elizabeth Warren to Steve Bullock that Steyer is essentially buying himself into the race — and maybe that Steyer’s $100 million would be better spent supporting Democrats who are not him. Bullock said that the debate rules “allowed a billionaire to buy a spot on the debate stage.”

“The Democratic primary should not be decided by billionaires,” Warren said on the day Steyer entered the race.

But in a reminder of just what it’s like to be Tom Steyer, his tax returns show that $100 million is less than the amount of taxable income he collected in 2017 (final tally: $109.5 million.)

Some money in, some money out.

How the classics kids try to cover up a murder in The Secret History
The fight over She-Ra’s new redesign, explained
Anti-lockdown protests aren’t just an American thing. They’re a global phenomenon.
The 2010s were supposed to bring the ebook revolution. It never quite came.
How tag became a professional sport
Mitch McConnell hints he could block the next stimulus package