How Santas are handling a pandemic Christmas season 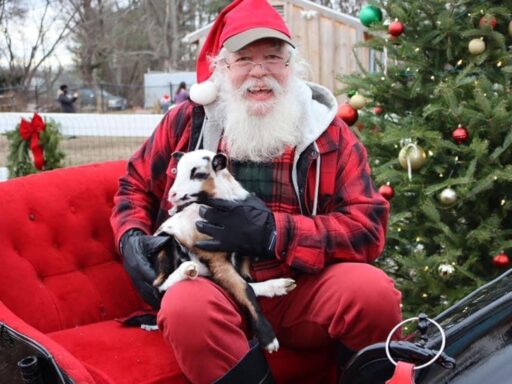 “It hurts when somebody brings a baby and we can’t hold them”: What it’s like to play Kris Kringle during Covid-19.

He’s making a list, he’s checking it twice — and it’s probably going to include hand sanitizer, face masks, and extra gloves. Not even Santa Claus is exempt from the struggles of 2020, despite the Trump administration’s attempt to get him early vaccine access, and Dr. Anthony Fauci’s assurance to American children that he has “innate immunity.”

While some retailers, like Macy’s, have nixed in-person Santa visits altogether, others, from mall operator Brookfield Properties to Bass Pro Shops, are adapting to meet safety guidelines by putting Santa behind plexiglass or offering families the chance to share their Christmas lists with him on video chat.

Pandemic-era Santa visits have even spawned a whole cottage industry, from JingleRing, a new platform designed to simplify virtual Santa visits, to plastic snow globe tents. The Goods called four Santas — from The Real Black Santa, who’s learning a new virtual system in order to reach a wider audience, to an adults-only Santa figuring out how to translate his raunchy humor to Zoom parties — to hear how they’re approaching the 2020 Christmas season.

At Cabela’s here — and I believe it’s true chain-wide — they have a three-eighths inch, about 6-by-6 foot piece of plexiglass between us and the guests. Santa wears a face shield as well. When folks sit down for photos, they can take their masks off. Since I’m behind the plexiglass and a face shield, that makes me feel comfortable. It’s a pretty wide-open space, there’s a lot of air circulation. After every guest, the elves wipe down the seat, and every hour they wipe down the plexiglass.

It hurts when somebody brings up a 4-month-old baby because we can’t hold them — that’s one of the parts I think we all have difficulty with. But I’ll tell you, last night I had a 5-year-old boy. As he approached Santa, he started to run, full speed. And he kind of leapt and smacked into the plexiglass. As soon as I realized what was happening, I put my hand up and I steadied the plexiglass so there was no chance of him knocking it over. He looked like a cartoon — his nose went a little flat, his eyes were wide open, his hands were out, arms wide open, thinking he was gonna get to Santa. And he almost slid down a little bit. Then he shook it off and laughed and sat down and got his picture taken.

Some of the guys are experimenting with baby monitors. So we can put a baby monitor on [the guest’s] side that nobody touches, but we can hear the kids talking. We’re trying that out just to see if we can help because some of the kids are so soft-spoken. It’s a little harder to joke around with the kids, but they get it. I mean, one of the sad things is watching how comfortable these children are zipping their masks on and off. I think what people need to focus on is what you can do, not what you can’t do. If you worry about what you can’t do, that’ll just ruin the holiday.

The virtual studio for me was not new. My company, The Real Black Santa, has been in business 19 years now, so it was easy for us to go virtual because we had the backdrop and the lighting, all the things that were necessary, from doing mall visits. The hardest part about it was learning the computer system OBS, which is what a lot of gamers use, and doing it through Zoom or Skype. With JingleRing, they have a proprietary platform that we’re using. Basically you just need a blue or green screen backdrop, and you get working. They brought me on as a brand ambassador, so they’ve got me doing videos for the company, and I’m also trying to get additional Santas to come on board.

[Online], it’s still that same greeting that you have when you’re in the mall. But the good thing about it is Santa is actually calling you from his workshop. If they hear noise in the background, those are the elves, making toys. Mom and Dad have already given us some detailed information about what the kids got for Christmas the year before, how they were performing in school, you know, are they helping at home. As a Santa, you have to be a better performer, and know how to talk to somebody as if they were standing in front of you.

Most guys who are doing Santa — we’re a little older. We’re in that category where we’re overweight, a lot of the guys are diabetic, have heart problems, and so forth. It’s hard for us not to be in front of the kids. And though I want to be out there doing events, I don’t want to be behind a partition while kids are in front of me. I think that’s more impersonal than not being there. And I’d hate to sit in front of 20 kids, and I have something or contract something and pass it on to somebody else.

I have a lot of clients that are still calling wanting us to do in-person visits right now. And as much as I want to, I’m shying away from it. Usually, the day after Christmas I’m getting event bookings for the following year. I had to cancel the ones that we’ve already booked. So yeah, this definitely is a hit on the pocket.

I’ve been working with my clients to determine what they’re expecting from Santa; some of them want Santa with the mask, some of them don’t. l show up at the residence, we’ll social distance, and then when we get ready to take pictures, I’ll get seated and then the kids will back up into me so that we’re not facing each other. Once the pictures are over, if they want to have a one-on-one with Santa, then I’ll put a mask on.

I’ve had 14 different masks made by a local seamstress, with snowflakes and reindeer and that kind of thing. I’ve bought tons of sanitizer, so I’m sanitizing before and after each visit. I bought an extra four dozen gloves, so I’ll change my gloves after every visit. I went ahead and bought two more suits this year, which will give me seven so I can change my suit every day of the week. I’ve got a UVB light set up in a closet, and I can also sanitize them that way.

My business is probably down 50 percent this year, but I’m seeing a little bit of an uptick in home visits. They’re around 60-40 indoors-outdoors. I looked into the Zoom thing, and to be honest with you, there’s a pretty good capital outlay. You have to buy green screens, cameras, and ring lights and backdrops and all that stuff. And I’m more about the personal visit anyway. That’s kind of why I don’t do the malls, because that’s more about the picture.

The weekend after Thanksgiving through Christmas, I’ve got 48 visits booked, and I usually run about 70 a year. I’m going to go try to get tested at least 14 days prior to that. I’ve also invested in a thermometer, so that if people would like to check temperatures, we can do that before we get started. I’m going to be cautious and use common sense. And if something gets out of hand, I will stop whatever we’re doing. But I’m not too worried about it. I’m probably one of the younger Santas around here, and I don’t have any underlying health issues. If I get it, I get it.

Gigs were starting to come in, and then Washington recently put a moratorium on gatherings larger than five. It’s definitely a big hit. In a normal year, I personally do about 10 to 12 [bookings] through the holiday season. It’s not a ton, but I can always depend on a good little paycheck in January from it. But also, it’s just super fun.

My Bad Santa is the jolly, drinky uncle that comes to the party — like, you don’t want him to sleep over, but for 30 minutes, people love it. He’s fun, he doesn’t upset anybody, he tells all the ladies they’re pretty and tells some very off-color jokes. I have a lot of clients that come back to me year after year for corporate parties. Some of these groups have been coming back to me for years. I’ve always felt a little bit like a part of the family coming in on a special party night, like, “Remember, last year when you made that North Pole joke, and my wife spit up her drink?”

Usually, depending on the client, I’ll get a little bit of roasting information so I can come prepared to zing people. I’ll probably end up using technology a little bit, maybe some silly virtual backdrops that’ll kind of elevate the comedy, ideally. But nothing beats the live in-person improv in the physical space, right? You can still improv, but as we all know, these Zoom things are a little hard to manage, because people want to talk over each other and laugh, so that dynamic tends to be a challenge to kind of manage the flow of the party in the comedy.

But I think people are so hungry for connection right now. I think if anything, people will, to some degree, suspend their disbelief and be like, this is as good as we can get right now. Let’s really lean into it and enjoy the togetherness even if it’s through a screen.