How scientists colorize photos of space 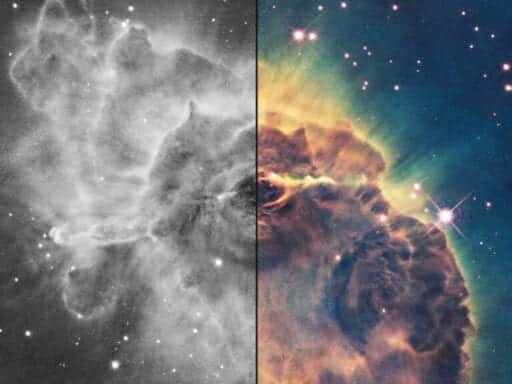 The Hubble Space Telescope only takes photos in black and white. To make those beautiful space photos you’ve probably seen, scientists add the color later, using a technique developed around the turn of the 20th century that imitates how our eyes naturally perceive color.

Only a fraction of the range of frequencies of light and their wavelengths, called the electromagnetic spectrum, is visible to humans. The photoreceptors in our eyes, called “cone cells,” perceive wavelengths of light that appear roughly red, green, and blue. All other colors are combinations of these three, and they’re known as the primary colors of light.

When Hubble scientists take photos of space, they use filters to record specific wavelengths of light. Later, they add red, green, or blue to color the exposures taken through those filters. The result is full-color images that have a variety of purposes for scientific analysis.

To learn how (and why) they do it, check out the video above. And for more Vox videos, make sure to subscribe to our YouTube channel.

The Trump administration expelled unaccompanied migrant children in violation of a court order
Do plastic bag taxes or bans curb waste? 400 cities and states tried it out.
Thousands of child migrants may soon be held on US military bases
Funeral homes have been changed by the coronavirus. Here’s what it’s like to work in one.
Why the left should worry more about AI
Bernie Sanders wants to put credit reporting companies like Equifax out of business