How sex toys made their way to the shelves of Walmart 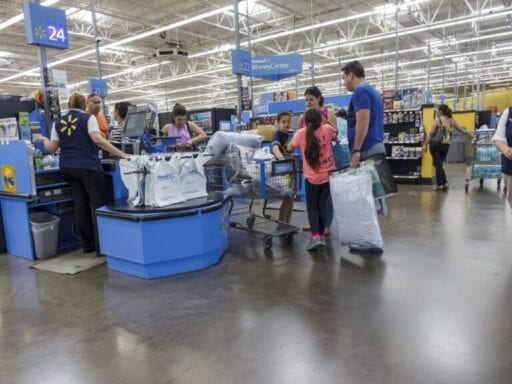 PlusOne is the first brand of personal massagers Walmart will sell.

And in a major development, we’ve reached a point where mainstream retailers feel completely comfortable stocking quality vibrators, not just in their digital warehouses but on the shelves of their brick-and-mortar stores. Just this month, PlusOne, a new line of premium sex toys, debuted at Walmart stores around the country, marking the first time that the retailer has carried high quality, rechargeable vibrators on the shelves of its brick-and-mortar stores. (Walmart did not respond to requests to comment for this article.)

How did sex toys get from The Pleasure Chest to the shelves of Walmart, a store so conservative it banned Cosmopolitan from its checkout aisles for being too risque? That Sex and the City trip certainly helped push sex toys out of the shadows and into the mainstream, kicking off a run of media appearances for pleasure products, with not just 50 Shades of Grey, but shows like Girls, Transparent, and Sense8 all featuring sex toys within their storylines. Broad City, in some ways a quirky, millennial successor to Sex and the City, even has its very own line of sex toys. Feminist activism, improved sex education, and the liberalizing effect that internet has had on discourse have also helped — it’s all a part of what Carol Queen, staff sexologist at sex toy boutique Good Vibrations, refers to as “an increasingly sex-comfortable environment that let sexual diversity, pleasure, and toys take their place in the discourse.”

Online retailers and brick and mortar stores displayed wildly different attitudes towards what sorts of products their clientele might be comfortable with. Online, pretty much anything was allowed: many major retailers opened their platforms to third party distributors, allowing a wide variety of risque products to be sold under a mainstream brand name — Walmart’s website currently stocks a penis extender, a hyperrealistic dildo (complete with balls) capable of suctioning to whatever surface you wish, and a vibrating butt plug designed to look like a puppy tail, all products that will, presumably, never see the inside of a Walmart brick and mortar store.

PlusOne’s origin story is, in some ways, the natural endpoint of our increasing comfort with erotic products. The brand is a subsidiary of Clio, a Massachusetts-based personal care company known for devices like the beautytrim hair trimmer and palmperfect electric shaver. About eight months ago, the powers that be at Walmart reached out to the Clio staff to let them know they were interested in investing in a high quality, low cost sex toy line that could comfortably fit in on the shelves of Walmart, one that would give them a competitive edge over retailers like Amazon. Clio worked hand in hand with Walmart’s higher ups to develop a line that would feel sexier and more female-friendly than some of Trojan toys, while still being entry level products that wouldn’t offend anyone’s sensibilities — and from there, plusOne was born.

Jamie Leventhal, founder and CEO of plusOne, envisions a future where Walmart shoppers can stop by the store to do their grocery shopping, grab a plusOne vibe off the shelf, and go through discreet self checkout, getting access to quality pleasure products without ever stepping out of your comfort zone. It’s a wildly different mode of buying sex toys than the trip that the Sex and the City girls took twenty years ago — and it’s a future that could bring sexual pleasure to a much broader audience than ever envisioned before.

2 rockets from Gaza targeted Tel Aviv. Israel is likely to respond forcefully.
As many as 1,000 parents separated from their children are getting a second chance to stay in the US
Miss America or Democratic debate: Can you tell the difference?
U.S. Claire McCaskill of Missour has a rib cracked by a fellow senator
A California city gave some residents $500 a month, no strings attached. Here’s how they spent it.
The USMCA trade deal passes the House in a rare bipartisan vote

America’s third Covid-19 surge is here. It was predictable — and preventable.