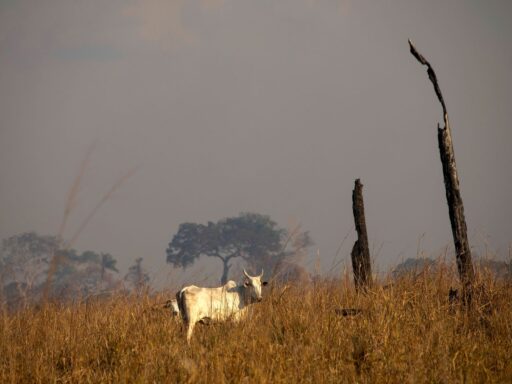 Share
Loading...
A cow stands in a burned section of the Amazon rainforest in Brazil. | Joao Laet/AFP via Getty Images

A new study shows that moving to a plant-based diet is critical, but governments have been slow to act.

Many of the massive wildfires that have scorched the Amazon this summer and in recent years can be linked to dinner plates in China and other countries around the world. Cattle ranchers have been using illegal burning to tame the rainforest into pastureland to meet rising global beef demand, a strategy that spells disaster for climate change and biodiversity.

These fires are but the latest distress signal from a deeply unsustainable global food system. Emissions are embedded in every part of the food supply chain, from deforestation to grow crops or raise cattle, as in Brazil — which releases carbon dioxide and nitrous oxide — to rice fields and cow burps, which emit methane, another potent greenhouse gas.

A new study published in Science reveals just how important tackling food-related emissions is to mitigating the swiftly accelerating climate crisis. For the first time, the researchers isolated food system emissions and showed that these emissions alone will most likely put the Paris agreement climate targets out of reach.

Even if all non-food greenhouse gas emissions were cut off today, the researchers project that food systems emissions would cause us to cross the threshold of 1.5 degrees Celsius temperature rise around the middle of the century. That is under their business-as-usual scenario in which food system trends from the past 50 years extend forward.

The food system is responsible for about 30 percent of greenhouse gas emissions currently, and these emissions are expected to rise rapidly as people around the world become more affluent and consume more meat and dairy products.

Given that dire trend, immediate changes to the way we produce and eat food are essential to stay within the Paris agreement targets, said Michael Clark, a researcher at Oxford University who co-authored the study. “The best time would have been 20 years ago, but the second-best time to start talking about food is now,” he said.

The study models five interventions to rapidly cut food emissions. The most effective, according to the authors, is the global adoption of a plant-rich diet. Yet relying on individuals to make a massive behavior change, especially in wealthy countries like the US where per capita meat consumption is far above the global average, is difficult and risky, given the urgency of the climate crisis.

Which means policymakers need to get more creative, and ambitious, to help consumers eat less meat and dairy. So far, governments have been slow to embrace dietary change as a climate solution, but they can draw from public health policies that have successfully changed diets to start taking action.

According to the Science study, food system emissions alone will nearly eat up the world’s remaining carbon budget. To stay below 2 degrees Celsius temperature rise, we have only 1,500 gigatons of carbon dioxide equivalent left to emit by the end of the century. Under the business-as-usual scenario, food emissions would take up 1,356 gigatons, leaving almost no room for other sectors.

Of course, the food system will need to share that budget with the biggest source of emissions: the energy sector. So the researchers modeled a scenario showing how both the non-food and food sectors would need to decarbonize to stay within the Paris agreement climate targets. In this scenario, they assume that emissions from fossil fuel combustion (in both food and non-food sectors) decline to net zero by 2050.

Against this backdrop, we can see how significantly the food system will have to change to prevent crossing the 1.5 degrees Celsius threshold.

In the chart below, the researchers show the effect of five key emissions reduction measures in the food system. On the consumption side, they model the effect of a plant-rich diet (with moderate dairy, eggs, and meat) and a healthy calorie diet (limited to around 2,100 calories). On the production side, they show how improved crop yields and more efficient agricultural production, including decreased fertilizer use, could make a difference. The fifth strategy, reducing waste, would take combined effort from food consumers and producers.

As the chart shows, if everyone ate a plant-rich diet (based on the EAT-Lancet recommendations), that would be the single most effective emissions reduction strategy. “That diet doesn’t have to look the same for everyone,” said Oxford’s Clark; it can be adapted based on cultural and personal preferences. And geographically, implementing this diet will look different. Western countries will consume less meat than they do currently, and other countries will consume more, Clark explained.

But plant-rich eating alone would likely not be sufficient to stay within 1.5 degrees. Instead, the food system will need to be changed using a combination of strategies: the bar to the right on the chart shows that if all five strategies were implemented at a 50 percent level, we could stay below 1.5 degrees.

Reducing the consumption of animal products is critical because they have an outsize carbon footprint. Meat, dairy, eggs, and aquaculture account for around 56 percent of food-related greenhouse gases while only providing 37 percent of protein and 18 percent of calories, according to a 2018 study in Science.

Plant-based “burgers” may be trending, but so far they haven’t made a dent in consumption patterns in the US. Gallup polling shows the rate of vegetarianism in the US has hovered around 5 to 6 percent from 1999 to 2018. And per capita meat consumption has been rising in the US, although researchers project that it could go down this year due to the impact of Covid-19 on the meat industry.

“It is not easy to change what we eat,” said Mario Herrero, the chief research scientist of Agriculture and Food at CSIRO, Australia’s national science research agency, who was not involved in the Science study. “There are very few proven policies that will actually change consumption patterns.”

A review of policies related to sustainable food consumption, published in Sustainability in July, found that almost no policies targeted animal products.

“Governments seem to be reluctant to address meat and dairy consumption,” the authors wrote, suggesting that the political influence of these industries may be a factor, along with a lack of popular support.

The strongest examples of government action to popularize plant-based diets are dietary guidelines in the UK, Ireland, and the Netherlands, which propose limiting meat consumption. But of course these are just guidelines, and most people in Western countries do not eat a diet aligned with their country’s guidelines, according to the review.

Looking at global climate targets, dietary policies and targets are also conspicuously absent. An analysis by the World Wildlife Fund published in August found that agricultural measures in plans countries filed under the Paris agreement focused on food production rather than food waste and diets.

The good news is that countries have public health policies to draw experience from. The Sustainability review highlights some existing food policies that have been effective and could be adapted to help drive a shift toward plant-based diets. These policies range from mandatory “hard” policies to “soft” educational policies and behavioral nudges.

One of the most well-established policies is taxing consumption to change diets. Taxes on alcohol and soft drinks for public health purposes have been shown to decrease consumption, according to the review. Taking a cue, leading health organizations in the UK are now calling for a carbon price on meat and other foods with a large environmental footprint.

Along with taxes, there is also good evidence that providing healthy food in public settings such as schools and government cafeterias can drive healthier eating habits. “Starting with the younger generations and creating good habits is really important,” said Herrero.

Softer policies like food labeling and dietary guidelines are less effective, but may be helpful in increasing people’s awareness of the impact of their food choices.

Beyond meat: Food production needs to change too

The widespread adoption of a plant-rich diet has the highest potential impact, according to the Science study, but other changes to the food system will also be essential.

Food waste reduction is critical, but it has been a formidable challenge across the world on both ends of the supply chain, according to Herrero. “It’s criminal sometimes how much we waste in households,” he said, pointing to the US in particular. Unfortunately, he said that not much progress has been made on waste in recent decades.

Luckily, on the food production side there is still room for improvement on other fronts in many countries.

“We do know that a lot of agriculture in the world has the potential to increase yields while reducing sort of harmful nutrients and other types of inputs,” said Kimberly Carlson, a land systems scientist at New York University who was not involved in the study. China, for instance, uses way more nitrogen and phosphorus in fertilizer than is needed, she said.

A study published in Nature in 2018 showed how farms in China could become more efficient. Researchers used crop models to optimize planting and fertilizer use across small farms in China. These improved farm management practices were adopted by 20.5 million farmers through the study, leading to a reduction in fertilizer use and increased yields. These changes reduced the greenhouse gas emissions from these farms by almost 8 percent on average.

Reducing fertilizer use and improving yields will make farms more efficient, which in turn helps conserve land. The World Wildlife Fund also recommends that countries actively work to prevent more natural habitat from being converted into farmland so that these natural ecosystems can continue to serve as carbon sinks and biodiversity hot spots.

Clark hopes the new study will help sound the alarm. “Everybody has a role to play, and everybody has some responsibility in terms of changing how we behave, how we interact with food, to make this more climate-friendly food system.”

The techlash hasn’t come up in the Democratic presidential debates. Warren could change that.
Trump and the Ukrainian president met today. Here’s what you missed.
Amazon employees shared an event invite to discuss how the company treats its workers. Then it disap...
Networks giving Trump free airtime on Tuesday refused to air Obama’s 2014 immigration speech
The essential kindness of Bill and Ted
Poll: Americans want corporations to promise no layoffs in exchange for bailouts