How teachers unions can survive 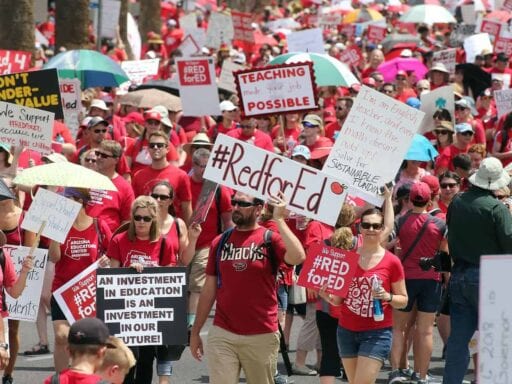 After the shock of the Supreme Court’s Janus decision, the unions should emphasize how they can help teachers’ professional development.

The Supreme Court’s recent Janus v. AFSCME decision, which gave public-service employees the right to stop paying any dues or fees to unions while still receiving union-negotiated benefits, delivered a devastating blow to the labor movement.

Some observers are even wondering if public-sector unions can survive its effects.

Unions can, but they will need creative new strategies for generating support — and funds. Our research into the statewide teachers union in Iowa — which, like others across the nation, has been protesting cuts to education (though it hasn’t struck; the state has strong anti-striking laws) — offers some evidence about what kind of new tactics will work.

Our results suggest that public-sector unions are most likely to be successful not when they stress the political “voice” that unions provide, nor when they stress narrow job protections. Rather, unions looking to energize their members need to provide clear benefits that members value related to their identity as professional employees — benefits that those members can’t get elsewhere and that members have to pay dues to get.

For teachers, we found, that meant training (classes, conferences, and workshops) and classroom support on issues central to their jobs, like the use of technology and how to help students with mental health issues. Other public employee unions might offer similar benefits tailored to the jobs and skills held by their members: for state social workers, it might be trainings to better help their clients. The key seems to be assistance that helps people do their jobs better.

Social scientists have long understood that “selective benefits” like these build support for membership organizations of all sorts. In their fight against the coordinated attack they face, unions should remind their members about the selective benefits they provide and find ways of offering new benefits.

While we can’t say for sure why this appeal worked, we can make some informed speculations based on interviews and surveys we conducted (plus existing research on labor unions). It may be that, in an age of weakened union power, unions are only able to credibly talk about professional benefits, and not the broader ambitions that have historically motivated the labor movement.

Or it may be that our results speak most directly to the situation in a red-tinged state like Iowa, where other goals just won’t fly. In red states, resistance to some union politicking is real, whereas conferences and workshops designed to improve one’s quality as a teacher are likely to be supported regardless of members’ political orientations.

What’s more, Iowa teachers we surveyed indicated that these benefits helped them to feel that they were part of a broader community of professional educators. Benefits build member interest — and, ultimately, union power.

National polling reveals the depth of the challenges that unions face in a post-Janus world. In a recent poll of public school teachers, 61 percent of non-unionized teachers in non-right-to-work states — that is, the states directly affected by Janus — indicated that they would opt out of supporting unions altogether if given the chance by the Supreme Court. They now have that choice.

In reaction, teachers are fanning out across the country to convince the people who used to pay agency fees to become full-blown union members. But they are up against a strong anti-union lobby. And, unsurprisingly, the nation’s largest teachers union, the National Education Association, has announced that it is cutting its annual budget by $28 million, or about 7.5 percent, projecting a 14 percent drop in membership over the next two years (both because of general anti-union trends as well as Janus).

For our study, we sent out appeals from the Iowa State Education Association, the main statewide union for educators, emphasizing different things that unions provide for their members, and measured those messages’ effect on member action.

As in other states, Republicans in Iowa have turned their fire on public-sector unions

To understand the experiment, it helps to have some background about Iowa’s political landscape, which in many ways resembles national trends. When the state government flipped to full Republican control after the 2016 elections, the first item on the GOP agenda was massive retrenchment of public employee union rights, along the model of Wisconsin Gov. Scott Walker’s 2011 “budget reform.”

The law that Iowa Gov. Terry Branstad ultimately signed into law curtailed bargaining rights for nearly all public workers, preventing unions from negotiating over health insurance, pensions, and teacher evaluation standards. Unions now can only bargain over wages, and even then there are caps pegged to inflation.

In another anti-union move, the new law also requires public employee unions to hold recertification elections at the end of every contract. Unions must win a majority of all employee votes to continue on as the labor representative of each workplace.

Conservative reformers hoped that the one-two punch would strip unions of members and dues.

But Iowa’s first recertification elections last fall, covering nearly 500 worksites and more than 33,000 public employees, showed teachers were ready to fight back. The turnout rate was nearly 90 percent (votes could be cast online or by phone), and 98 percent of those who participated opted to keep their union.

The messages that resonate most with teachers involved professional development

During those recertification elections, we investigated which messages would be most (and least) effective in getting union members to the polls. Working in partnership with the state education association, we designed a series of emails that we sent out to the membership. These messages emphasized different reasons why members might vote to support the union: the union’s professional benefits for its members, like continuing education classes and teaching resources; how the union offers a collective voice for its members in politics; and the job protections that the union offers to its members, like legal representation and advice.

Members were randomly assigned to receive one of these messages, which also included a link to vote for recertification online. We then checked whether union members were more or less likely to click the link to vote in the election depending on the specific messages that they saw. (We could not observe how individual voters actually voted.)

Iowa public school educators overwhelmingly responded positively to being reminded of the professional benefits their union offered to them by trying to cast votes for recertification.

If they were to put renewed emphasis on professional benefits, public sector unions would be returning to their roots. Public unions, especially teachers unions, can trace their lineage back to professional associations (well before the expansion of state-level public union rights in the 1960s and 1970s).

These associations helped educators develop and maintain their classroom skills, coordinated with state and local governments on teacher licensing and certification, and fostered a community of professionals within and across the states.

Our research in Iowa shows that public employee unions would be well advised to return to that kind of model.

How do our recommendations fit with the wave of teachers strikes that rolled across several states last spring? We believe our findings suggest a winning rear-guard strategy that can be pursued at the same time as these other social movement strategies. Unconventional strikes and protests can help unions gain legislative victories, but our experiment shows how unions can bolster and re-engage their memberships — especially in red states hostile toward public-sector unions.

Ultimately, revitalizing the public-sector labor movement will require a range of tactics tailored to each individual union’s specific contexts and goals. But after the shock of Janus, our findings suggest that reemphasizing the professional benefits that public union members value so highly should be one of the strategies unions deploy as they attempt to rebuild their clout.

The Big Idea is Vox’s home for smart discussion of the most important issues and ideas in politics, science, and culture — typically by outside contributors. If you have an idea for a piece, pitch us at thebigidea@vox.com.

Self-care at the end of the world
The thankless task of social distancing
Trump’s comments about the IG report turn reality on its head
Facebook and Twitter suspend Trump’s accounts
Juul, the vape device teens are getting hooked on, explained
The five most important words in Michelle Obama’s 2020 DNC speech