How the 2010s changed health care 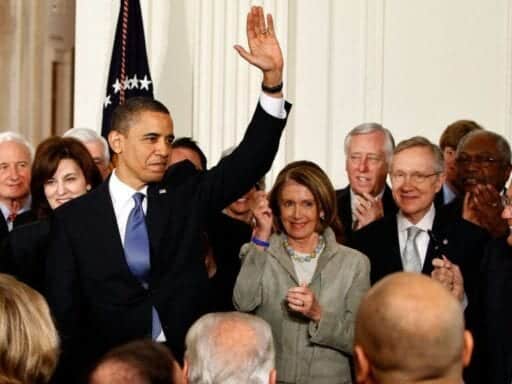 The decade brought America closer to universal coverage. But there’s still a long way to go.

Ten years ago on Christmas Eve, the Senate passed its version of Obamacare. The 2010s began with the United States taking its most significant steps toward universal health coverage in a generation.

It ends with the country having moved closer to that goal than ever, but still falling short. There have been plenty of bumps along the way. And the debate about how best to provide affordable health care to every American is as vital as it’s ever been.

After the Senate vote 60-39 on December 24, 2009, the first of the law’s many trials soon followed: the death of Sen. Ted Kennedy (D-MA) and the election of Republican Scott Brown to replace him, breaking the Democratic supermajority.

Still, the law passed, thanks to the legislative chicanery by then-Senate Majority Leader Harry Reid and once and future Speaker of the House Nancy Pelosi, and was signed by President Obama in early 2010. The 2010 midterms were disastrous for Democrats, but the law would persist.

In 2012, it overcame its first existential threat at the Supreme Court, when Chief Justice John Roberts found a rationale for upholding the individual mandate and with it the rest of the law. The botched rollout of HealthCare.gov in 2014 might have damaged its reputation and provided catnip for critics, but eventually the marketplaces were up and running. Another SCOTUS case in 2015 left the law intact, once again thanks to Roberts.

Then came the 2016 election of Donald Trump. Republicans finally had a chance to deliver on their promise to repeal and replace the health care law they hated so much. The repeal fight would consume Trump’s first year in the White House.

But Republicans couldn’t overcome a basic change in US health care politics. As the Affordable Care Act’s approval with the public slowly started to improve, public opinion on something else was changing in parallel: Americans had broadly come to believe (again, after a significant dip when the law first passed) the government had a responsibility to make sure everybody had health coverage.

That belief is reflected most directly in the strong support for the ACA’s ban on insurers denying coverage based on preexisting conditions, which nearly 75 percent of people now say should be maintained.

Obamacare has been hobbled along the way. Medicaid expansion was undercut by the Supreme Court by making it optional for states, a decision that has left more than 2 million people in poverty without coverage. The law’s financing for health insurers has been blocked by congressional Republicans and Trump. The administration has sought to implement Medicaid work requirements to trim the number of people covered by Medicaid expansion and taken numerous other steps to undermine the ACA’s private insurance markets.

And today, right now, the Trump administration and Republican-led states are still trying to get Obamacare overturned by the courts. The fight isn’t over.

But at the end of the decade, millions more Americans have health insurance now than they did at the beginning of it. The uninsured rate is near its historic low. Early evidence indicates people are living longer and they are less at risk of going bankrupt over medical bills because of coverage expansion.

And yet, the project remains unfinished. Tens of millions of Americans still lack insurance and many millions more have an insurance card but not benefits that would actually provide financial security in the event of a dire diagnosis or emergency. Premiums and out-of-pocket costs for the 150 million Americans who get insurance through work continue to rise. US health spending still leads the world by far, driven by the highest prices anywhere on the globe.

In the wealthiest country in the world, one in four people say they have delayed treatment for a serious medical condition because of the cost.

So Democrats are still today debating how much to expand government programs to cover people and how aggressively to regulate health care prices.

The extraordinary influence of the health care industry, dented but holding firm heading in the 2020s, makes the road to any new reforms extremely challenging. It could be a very dark harbinger for the decade to come that Congress has failed to pass a fix for surprise medical bills here at the end of the 2010s, overwhelmed by industry lobbying and political in-fighting.

The next 10 years promise a continued, prolonged debate about how to fix US health care — without any guarantee the dream will be realized.

Republican National Convention speakers, explained for people who don’t watch Fox News
Surgeon General Adams asks people of color to increase anti-coronavirus efforts “for your big mama”
Here’s how Biden could undo Trump’s deregulation agenda
Funeral homes have been changed by the coronavirus. Here’s what it’s like to work in one.
Donald Trump is defunding the police
Kayleigh McEnany has made a mockery of her promise not to lie. Tuesday’s briefing was case in point.