How the abortion debate moved away from “safe, legal, and rare” 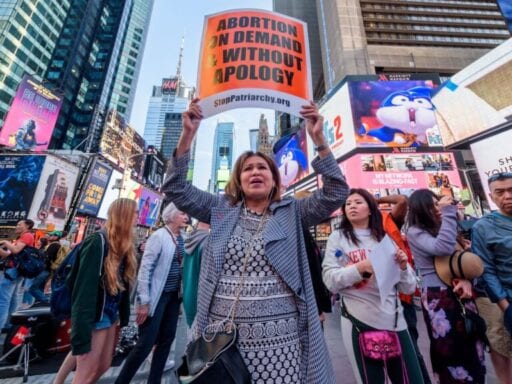 Share
Loading...
Protesters in favor of abortion rights gathered in New York’s Times Square as part of a national day of action against recent abortion bans on June 4, 2019. | LightRocket via Getty Images

Democratic politicians used to say abortions should be rare. Here’s how that changed.

“I agree with Hillary Clinton on one thing,” Rep. Tulsi Gabbard said at the Democratic presidential debate on Tuesday night. “Abortion should be safe, legal, and rare.”

Clinton used this language in her 2008 presidential campaign; Bill Clinton, meanwhile, had introduced it into Democratic politics back in 1992. The language was likely meant to appeal to people who supported the right to an abortion in principle but still felt morally conflicted about the procedure — a large group, according to some polling. But many abortion rights advocates argued that calling for the procedure to be “rare” placed stigma on people who seek it.

“There’s a fundamental notion of bodily autonomy that we’ve been fighting for as advocates and activists on this issue for years,” Destiny Lopez, co-director of the All* Above All Action Fund, a nonprofit that works to expand abortion access, told Vox. Saying abortion should be rare “completely negates all the work that we’ve done to really make this about the ability to decide what’s best for your body, for your family, for your community,” she said.

Over the years, Democrats have become more sympathetic to this view. By 2016, Hillary Clinton had changed her message, saying only that abortion should be “safe and legal.” It was part of a broader shift in the party toward more full-throated support of abortion rights. During the 2016 primaries, both Clinton and Sen. Bernie Sanders called for a repeal of the Hyde Amendment, which bans federal funding for most abortions. Today, all the Democratic presidential candidates, including Gabbard, support allowing federal funding for the procedure — along with a slate of other reforms aimed at increasing access.

But as Gabbard showed, the framing of “safe, legal, and rare” isn’t gone. Her comment, and the conversation surrounding it, were a reminder not just of how much the Democratic Party has changed in recent years on abortion rights, but of the divisions that still remain.

Democratic politicians have been moving away from “safe, legal, and rare” since 2012

The phrase “safe, legal, and rare” entered common usage during the 1992 campaign, when Bill Clinton frequently used it, according to the New York Times. “We have to remind the American people once again that being pro-choice is very different from being pro-abortion,” he told the Congressional Women’s Caucus that year.

During her 2008 presidential campaign, Hillary Clinton echoed her husband’s message, emphasizing that “by rare, I mean rare.”

But over the years, abortion rights advocates have pushed back against the phrase. “Safe, legal, and rare” implies that getting an abortion is something that “you should be apologetic for,” reproductive justice activist Renee Bracey Sherman told Vox. “It places the blame on the person who’s had an abortion, as if they just did something wrong to need one, rather than addressing the systemic issue as to why someone might not be able to have access to consistent health care or contraception.”

The push to destigmatize abortion has been part of a larger rise in people who have had abortions being open about their experiences.

“Prior to 2016, we did not have a lot of people publicly saying the word abortion” or talking about their first-hand experiences, Lopez told Vox. But “there has just been this seismic shift” in the last few years “where we’ve seen more public conversations about the realities of abortion access in this country.”

Those realities have changed a lot since 1992. Opponents of abortion have long sought to restrict the procedure, but after 2010, when Republicans took over many state legislatures, they successfully passed a slate of restrictions on abortion clinics that caused many facilities in the South and Midwest to close. Between 2011 and 2017, half of the clinics in Arizona, Kentucky, Ohio, and Texas shut their doors. In 2017, 89 percent of counties had no abortion clinic, and six states had just one.

That made it much harder for many Americans to get an abortion, especially if they couldn’t afford to travel to a far-away clinic.

Meanwhile, Trump’s election in 2016 was soon followed by the appointment of Justices Neil Gorsuch and Brett Kavanaugh to the Supreme Court. Many advocates on both sides of the issue believe that conservatives on the Court now have enough votes, if not to overturn the landmark abortion decision Roe v. Wade, then at least to significantly weaken it. Earlier this month, the Court announced it would take a case that could give states the green light to pass even more clinic restrictions, possibly legislating clinics out of existence.

In a time when access is dwindling and Roe is at risk, advocates have argued that calling for abortion to be “rare” just makes it even harder for people who already struggle to get the procedure — who are disproportionately likely to be poor, people of color, LGBTQ, immigrants, or belong to more than one of these groups — to push for their right to get it.

“If there are barriers put in front of a person,” the “safe, legal, and rare” framing implies “that it does not matter because that procedure should be rare,” Lopez said. “So it essentially is denying these folks the ability to really access the care that they deserve.”

For that reason, the All* Above All Action Fund says that abortion should be “safe, legal, accessible, and affordable,” not rare, Lopez said.

Democratic candidates have been listening to concerns like these, and in recent years, they’ve moved away from “safe, legal, and rare.” The word “rare” was removed from the Democratic party platform in 2012, Sherman said, and in 2016, Clinton no longer used it on the campaign trail.

A discussion of abortion in her 2017 book What Happened showed how much the former candidate’s language had changed on the issue. “We can debate the morality of abortion forever,” Clinton wrote, “but at the end of the day, who decides whether a woman gets or stays pregnant?”

Clinton’s shift was part of a bigger move in the Democratic Party toward more outspoken and less equivocal support of abortion rights. In particular, advocates had been calling for a repeal of Hyde for years because the amendment, first passed in 1976, blocks Medicaid coverage for almost all abortions. As a result, many low-income Americans are blocked from getting the procedure or forced to go into debt or forego necessities to pay for it.

In 2016, the Democratic Party added a call to repeal Hyde to its official platform. Today, all the Democrats running for the 2020 presidential nomination say they support allowing federal money to pay for abortions. Even former Vice President Joe Biden, who earlier this year supported leaving Hyde in place, now calls for its repeal.

The move to repeal Hyde and the move away from “safe, legal, and rare” are linked, Sherman said. “This is just a general shift in moving away from stigmatizing people who need and have abortions.”

Despite the shift, divisions on abortion remain among Democrats

But “safe, legal, and rare” isn’t completely gone. Gabbard — who once identified as pro-life but now says she supports abortion rights — used the phrase at the fourth presidential debate on Tuesday night, when she was asked how she would stop states from restricting abortion access.

“We see how the consequences of laws that you’re referring to can often lead to a dangerous place,” Gabbard went on. “I do, however, think that there should be some restrictions in place. I support codifying Roe v. Wade while making sure that during the third trimester, abortion is not an option unless the life or severe health consequences of a woman are at risk.”

Many abortion rights advocates criticized her response, but one — former Planned Parenthood president Dr. Leana Wen — praised her, arguing that “we should reduce the need for abortions by investing in prevention.”

I don’t agree with @TulsiGabbard on a lot, but do appreciate that she brought up the third rail for Democrats: that abortion should be “safe, legal, and rare.” We should reduce the need for abortions by investing in prevention.

Wen broke with other abortion rights advocates some time ago. When she was removed as Planned Parenthood’s president in July, she said in a statement that, “I believe that the best way to protect abortion care is to be clear that it is not a political issue but a health care one.” Some said the group ousted her because it was looking for “a more aggressive political leader” on abortion rights, while others said she had management issues.

Since she left Planned Parenthood, Wen has argued that the best way to build public support for abortion rights is to seek common ground with people who may be uncomfortable with the procedure, but want it to remain legal. She wrote in a New York Times op-ed shortly after her departure that while leading the group, “I reached out to people who wrestle with abortion’s moral complexities, but who will speak out against government interference in personal medical decisions.”

“We need to stop treating those whose views differ from our own with scorn and suspicion, and instead work together to safeguard our health, our rights and our future,” she concluded.

And after Tuesday’s debate, Wen made clear that she saw the “safe, legal, and rare” framing as a way to reach out to people with different views on the issue. “Pro-choice & progressive movements will lose unless we allow more people to join who do not agree 100% with the most extreme ideology,” she tweeted. (Wen declined, through a representative, to be interviewed for this story.)

She isn’t the only abortion-rights supporter to use “safe, legal, and rare” in recent months. In an interview with NPR’s Sarah McCammon earlier this year, Pamela Maraldo, a former president of Planned Parenthood who resigned in 1995 under circumstances similar to Wen’s, said that she wanted Planned Parenthood to return to that framing.

In general, those who argue on behalf of prevention say that better access to contraception would naturally lead to abortion becoming rarer. Indeed, the abortion rate has hit an all-time low in recent years, and experts say better access to long-acting reversible contraceptives like IUDs is likely the reason why.

But moves by the Trump administration, like increased restrictions on Title X family planning funding and a weakening of the mandate that employer-based insurance cover birth control, could threaten access to contraception, especially among low-income Americans.

Even if access were perfect, “contraception is not foolproof,” Lopez said. “People will always need abortion care in this country, period.”

The disagreement between Wen and other activists, and among Gabbard and other candidates, is a reminder that even among people who generally support abortion rights, there are a lot of differences in approach and priorities.

That’s why advocates like Sherman, who started the hashtag #AskAboutAbortion in 2016, have been pushing for moderators to ask questions about abortion rights in Democratic debates. Tuesday was the first time in four presidential debates (two of them spread across two nights) that moderators asked anything about abortion, Lopez noted.

“For so long we heard, ‘well, they’re all pro-choice, it doesn’t really matter,’” Sherman said. On Tuesday night, though, “it was clear: they actually don’t all have the same stance.”

The abandoned asylum seekers on the US-Mexico border
Are we living in a computer simulation? I don’t know. Probably.
Downtown Cincinnati shooting: what we know
When ordinary people go viral, where’s the line between comedy and cruelty?
Westworld unleashes a big battle and a bigger twist in a flawed but fascinating finale
Get yourself a pandemic crush