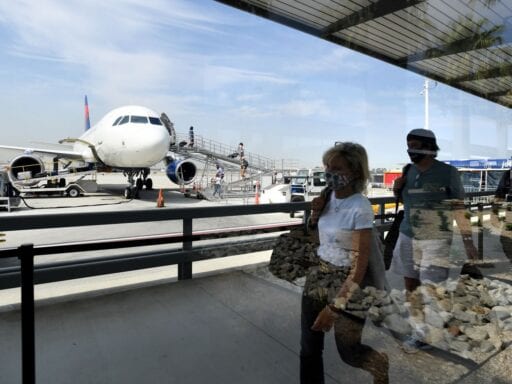 Share
Loading...
Covid-19 testing will be a fixture of travel for the foreseeable future. | MediaNews Group via Getty Images

Kyle Potter, the editor of the travel deals website, Thrifty Traveler, is used to flying a lot. But things haven’t been the same since the pandemic. Back in June, when he flew for the first time since Covid-19 hit the United States, it was an eerie experience.

“Pretty much everyone just really feels on edge. I think in a lot of cases, people feel kind of guilty about being on planes right now,” Potter told Recode. “It just kind of all adds up into an unfamiliar experience.”

The notion of being stuck in a metal tube filled with lots of other people and recycled air seems scary in a pandemic, which is why we’re seeing so many car vacations this year. Plus many people don’t have the money or motivation to travel long distances. There are those that must travel for whatever reason, and making that experience as tolerable as possible is essential to keep the airlines in business.

Experts estimate it could be years before people fly as often as they did. This bodes very poorly for the flight industry. Months after air travel plummeted at the dawn of the pandemic, money from the government bailout is drying up. That means that airlines are now laying off or furloughing, tens of thousands of employees, while others are being asked to take pay cuts.

That’s left many airlines and airport-related businesses scrambling for ways to convince travelers that it’s safe — and somewhat easy — to take to the skies. Now some are providing their own Covid-19 testing to travelers, while others are already looking for vaccination-related business opportunities. Overall, these moves hint that more aggressive measures to combat contagion could become a permanent fixture in the future of flying.

Airlines and airports are incorporating Covid-19 testing into travel

In the US, airlines including United, American Airlines, and Hawaiian Airlines are offering options for Covid-19 testing to passengers traveling to the state of Hawaii. These will include at-home tests, drive-through testing, and in-person tests at the airport. With a negative result in hand, travelers will be exempted from the state’s two-week quarantine requirements for new arrivals. American Airlines plans to roll out similar programs for some people traveling to Jamaica and Costa Rica.

Potter expects this trend to continue as international travel slowly resumes. “For all of the countries that are off limits to Americans — which, to be honest, is most of them — that is going to be … the condition for allowing travel to resume,” he told Recode. “Anywhere you can think of with very few exceptions that is going to become the norm, especially for international travel.”

But what about the privacy of people who test positive? Aaron McMillan, United Airlines’ operations policy and support managing director, told Recode that the airline itself wouldn’t keep records of a traveler’s personal health information. But United would get notified from a testing partner “that said customer wouldn’t be able to travel that day” and the airline “would make the necessary arrangements,” he said. Health experts at the airport’s testing site would then provide that United traveler with next steps for receiving care.

For some international travelers, in-airport tests have already become a norm as they travel between different countries. Airports in the US, including Tampa International Airport and Oakland Airport, are beginning to open Covid-19 testing sites of their own, too, and more are set to join.

Even XpresSpa, a firm that normally provides in-terminal spa treatments for travelers, announced this month that, in Newark Airport and JFK, it will offer Covid-19 tests, which cost between $75 and $200 depending on the test or tests you get. Travelers can walk-in or have pre-scheduled appointments that take place in the airports’ terminals. The company has also said it’s in conversation with “health passport apps” and looking into creating so-called air bridges between specific cities. The company’s CEO, Doug Satzman, told Recode that, in the future, he even imagines XpresSpa helping with vaccinations for Covid-19 or other illnesses.

The Transportation Security Administration has also made some changes. Instead of a human officer confirming the validity of someone’s identification card, TSA is now piloting a self-service checkpoint using a biometrics-based algorithm designed to confirm that a live photo of a person matches their ID. This builds on the agency’s previous pre-pandemic tests of facial recognition technology, which has also worried privacy experts over potential racial bias, inaccuracy, and surveillance applications.

Then there’s Clear, a company that’s best known for allowing people to bypass TSA screening and head straight toward their carry-on baggage inspection. In the pandemic, Clear has started to offer Health Pass, a biometric-based way of tracking peoples’ health status that was used, notably, to help conduct the National Hockey League playoffs in Canada. (In the NHL case, at least, there have been no recent confirmed Covid-19 cases stemming from the bubble the league created.) Despite the concerns of privacy experts and some members of Congress, Clear has now announced that it will integrate Covid-19 test lab results from LabCorp and Quest into Health Pass.

Clear told Recode that it’s in discussion with airlines and airports about integrating Health Pass into existing security screening processes for the general public. Clear employees are already using the health-based version of the tech at the airport; United, one of the company’s partners, told Recode that it might support Clear’s plans for Covid-19 testing. Amid the pandemic, Clear has taken the opportunity to expand its business model, transitioning from a service that made flying more hassle-free to a business built around confirming peoples’ identities everywhere, as OneZero recently reported.

But the air travel industry having business opportunities with Covid-19 tests reflects the broader failure of the US approach to the public health crisis, argues Kenneth Goodman, director of the Institute for Bioethics at the University of Miami’s Miller School of Medicine.

“The very idea that some people with an extra 200 or 150 — whatever it costs — dollars can buy a test is a sad sign of where our country and where the world is,” Goodman said. “This was not a business opportunity. This was an attempt to try and stop there being too many dead people. And we’ve made a total and complete hash of it.”

Goodman also emphasized that testing negative on a Covid-19 is by no means an assurance that you haven’t just contracted the illness or that you won’t contract it at the airport or on a plane.

Still, these changes highlight the new normal for air travel anxieties. Potter, of the Thrifty Traveler, says that before the pandemic, fliers were concerned about two primary things: the price of a ticket and in-flight services. Now, many in-flight services are gone, and airlines are most concerned with convincing fliers that it’s safe to be aboard.

The Centers for Disease Control and Prevention, which has issued guidance for air travel, estimated last month that close to 11,000 people were exposed to Covid-19 on flights, according to the Washington Post. As the Mayo Clinic notes, airplanes have sophisticated air filtration systems that can limit the spread of the virus, but a few studies have suggested that Covid-19 can be spread not just on flights themselves but also in security lines and airport terminals.

“To really boil it down, airlines have focused almost entirely on convincing people to get back on planes, convincing them that it’s safe to do so, and trying to get them on and off the plane and through the airport as fast and as safely as possible,” he told Recode.

Airlines and airports have made a point of showing off their cleaning procedures, including litanies of electrostatic sprayers, robot cleaners, and questionable fever-detection tech.

Another move is toward more contactless and biometric technologies. The Australian company Elenium, for instance, has debuted contactless Covid-19 airport kiosks that can hear peoples’ voices and respond to their head movements. These kiosks are now installed in airports in the Middle East, the US, and Australia.

“Even when the Covid crisis dissipates, when there is a vaccine, I think that both the public and business will be sensitive to the impact of future health events, even bad flu seasons,” Elenium CEO, Ilya Gutin, told Recode in an email. He noted that the company received more leads in the four weeks after announcing its Covid-19-focused kiosk than it had in the past four years.

As airlines begin incorporating Covid-19 testing, they’re also considering what their plans would look like when a vaccine finally becomes available to the public. McMillan, from United Airlines, told Recode that the company was considering how technology might be able to tie information about whether someone was healthy enough to fly to their boarding passes. “We see that evolving into vaccination records,” he said.

“Much like 9-11 changed the security process at the airport, this pandemic will change how people travel with health documentation going forward for sure,” McMillan added, echoing what many airline industry experts told Recode earlier this year.

But Potter is skeptical that people will be flying with the same enthusiasm anytime soon. Even a vaccine, he said, wouldn’t be enough to make flying feel normal again.

“It was really one of the first major industries to feel the pain of this,” he told Recode. “I think it’s probably going to be one of the last to feel the relief, whenever that happens.”

Trump supporters storm the US Capitol: The latest
Netflix’s Unsolved Mysteries is different than the original. But one episode restores its pulpy aest...
A new Trump rule could hold migrant families indefinitely in detention
Biden to allow asylum seekers Trump kept in Mexico to enter US
Black voters want 2020 candidates to talk about the economy. At the Black Economic Alliance Forum, ...
Wisconsin is still counting its votes. Vox has live results.