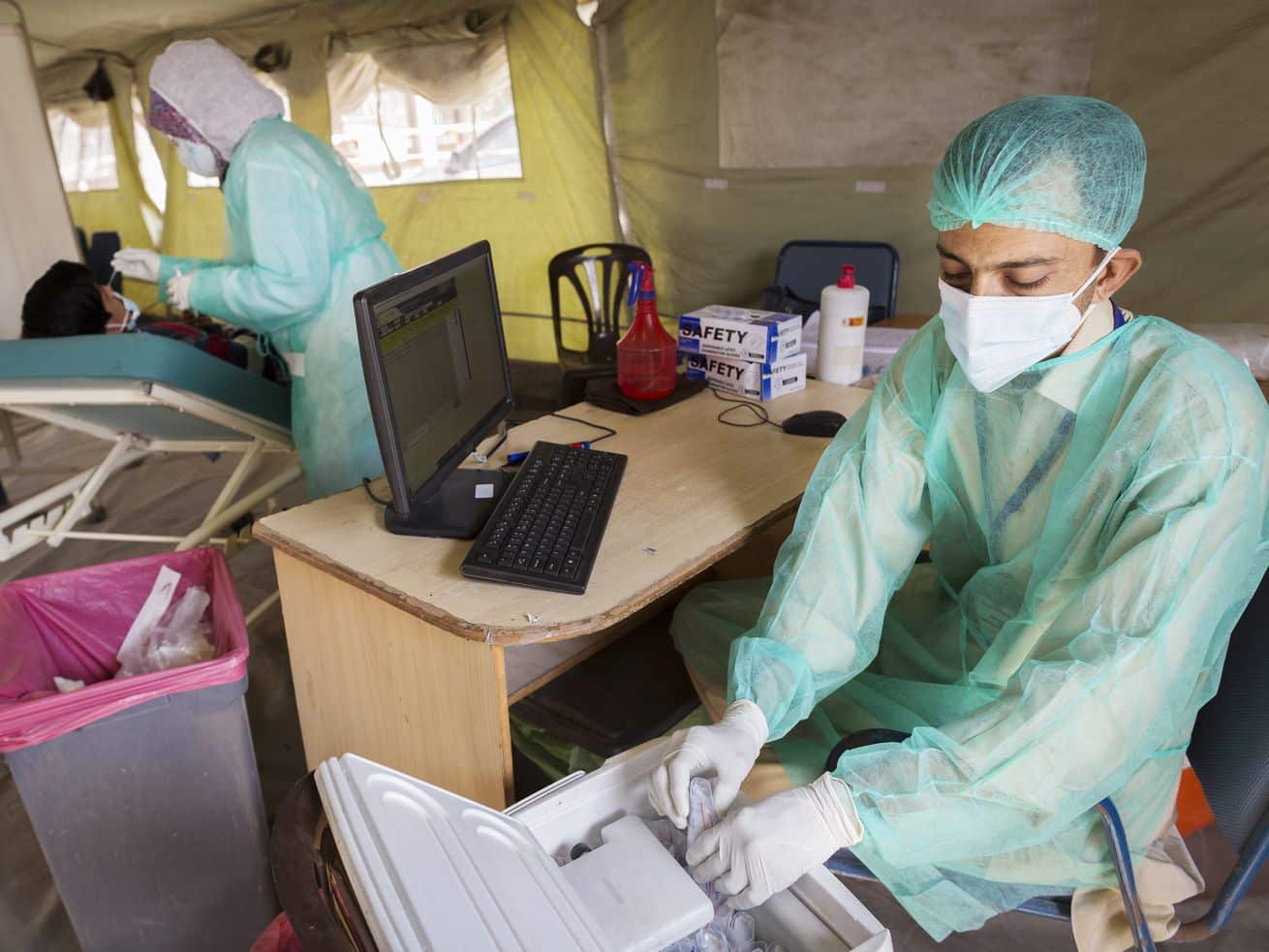 Vaccine distrust is often rooted in history for many communities of color.

“Happy vaccination day!” the nurse administering my Covid-19 vaccine tells me as I lower myself into her chair. Almost a year of social distancing has made me highly attuned to all the surfaces I’m touching: my elbow leaning on the desk, my hands signing the vaccine card with the pen.

The hospital where I work as a research scientist in a synthetic biology lab is vaccinating all its staff, and excited voices from all sorts of people — scruffy graduate students, put-together receptionists — fill the air. One thing is immediately noticeable, though: As someone who is Pakistani, I am one of the few people of color in the vaccination room. Even in a hospital in a city that is majority people of color, those being vaccinated are mostly white.

Recent polls show non-white people in the US are becoming more willing to take the vaccine, but continue to express more hesitancy than white people. This did not hit home for me until I realized that my cousin, a medical resident who grew up in Pakistan and now works in Texas, refused the vaccine. He was urged by members of our family to wait for more data, and even though he works directly with Covid-19 patients, he decided that, for now, he would not get vaccinated.

I was livid when I found out about his decision, blaming myself for the unread family group chats and ignored video calls. Could I have convinced him by pointing out the compelling data on the safety and efficacy of the vaccine? Or with the fact that developers have been extremely transparent about the small numbers of people who have shown adverse reactions? Or by reminding him that everyone in my family is vaccinated against other diseases: measles, mumps, and rubella; tetanus; tuberculosis, even, with the controversial BCG vaccine — used in Pakistan for decades after it was discontinued in the US — that left us all with puckered scars on our arms?

There are many roots of distrust around Covid-19 vaccines, but it feels imperative to put them in the context of Pakistan’s recent history. The country where most of my family grew up struggles with vicious vaccination battles of its own, particularly with distrust around the polio vaccine. This distrust doesn’t come out of nowhere.

In the early 2010s, the CIA ran a fake vaccination program in Abbottabad, offering free Hepatitis B vaccines to children in an attempt to collect DNA evidence linking Osama bin Laden to the compound where he was suspected of residing. It is unclear how samples were to be collected or how they would lead to bin Laden, but when news of this scheme broke, it added proof to existing conspiracy theories about vaccinations. As a consequence, many local leaders began urging people not to vaccinate their kids, various districts banned vaccination teams, and the Taliban issued a fatwa against vaccination programs. To this day, local leaders rail against vaccines as Western spying programs.

In 2013, in response to pressure from leaders in public health and science, the CIA promised to stop using vaccination programs to gather intelligence. However, the legacy of the fake vaccine campaign in Pakistan has understandably not been easy to overcome. Trust in public health officials has been dangerously eroded.

Pakistan is one of the three countries in the world where polio has not been eradicated. Along with neighboring Afghanistan, the country is seeing its highest increase in polio cases since 2014: 54 cases were reported in the first quarter of 2020, up four times from the year before. Polio vaccinators are targeted with violence; since 2012, at least 95 polio workers, including many women, are estimated to have been killed in attacks. As recently as this December, members of a vaccination team were wounded or killed in an incident that garnered very little coverage in the media.

Pakistan is not the only country with a history of medicalized violence. In the US, there is a long history of Black and brown people being used for medical experimentation, and it feels unsurprising that many other people of color I have come across have expressed hesitation about the Covid-19 vaccine.

The Black nurse who swabbed my nose for a PCR test last week says she didn’t take the vaccine when it was offered to her because she wanted to wait for the next round in case there were any side effects. The Latino delivery person at work tells me he turned down the vaccine because it hasn’t been tested properly. My friend, a Black organizer and educator, says on a Zoom meeting that she’s not going to take the vaccine because she doesn’t trust the medical establishment.

Vaccine distrust in the US cannot be divorced from recent history. In a class I teach on the legacy of racism in science research, we read about the US government’s study of untreated syphilis on Black men in Tuskegee; about J. Marion Sims, who carried out practice surgeries without anesthesia on enslaved Black women, who had a statue memorializing him as the “father of gynecology” in Central Park as recently as 2018; about Henrietta Lacks, a Black woman whose tumor cells were used without her consent to develop a cell line for cancer research; about glaring health disparities between white and BIPOC communities.

“Why didn’t we know about this?” ask my white, East Asian, and South Asian students. “Why didn’t we learn this in our science classes?” It’s hard not to feel like the forgetting is willful, and willful forgetting only creates more distrust.

For Covid-19 vaccination programs to undo distrust in time for the mass drives that will be needed to build herd immunity, what is needed is willful remembering and willful repair. It is morally imperative that vaccination drives engage with the history of medical harm in the US and abroad, acknowledge the role that both the government and individual scientists have played, and repair the fissures with community outreach, material resources, and firm commitments to undoing health disparities between white and non-white people.

Until that happens, the success of the Covid-19 vaccination program is going to come down to something Black doctors and scientists have already been doing: making individual pitches to their communities and families to take the vaccine. Here’s mine: I’m a Pakistani scientist who has looked at the data from the clinical trials of the vaccine and has decided to take the vaccine.

I feel happy that I got this chance, and that happiness lives with other feelings. I feel relief knowing I’m unlikely to get Covid-19, a horrible disease that has known long-lasting side effects, and I’d rather risk the unknown side effects of the vaccine for the relief of knowing I won’t pass the virus to more vulnerable members of society.

I feel anger, too, that BIPOCs will continue to die because of the legacies of medical racism, that children in Pakistan will die of polio despite an effective vaccine. And I feel guilt for receiving the Covid-19 vaccine ahead of so many others: my father, who lives in Pakistan and is immunocompromised; essential workers such as bus drivers and those in the food distribution chain who kept this country running during the pandemic; everyone who lives in a non-Western country who isn’t anticipated to receive the vaccine until 2024.

None of which I tell the nurse who wishes me a happy vaccination day. I sit patiently as she asks me questions about allergies, fills out my vaccine card, and loads up a syringe. “Wait,” I ask right as she’s about to jab me, a little embarrassed at what I’m about to ask. “Can I take a selfie?”

“Of course!” she says. “Will you do me a favor and post it with a positive message? So that more people get the vaccine?”

I promise her I will.

Hala Iqbal is a post-doctoral scientist studying antibiotics at NYU Langone. She writes, teaches, and organizes around science, race, and gender.

Spending more time outside this winter? Here’s how to stay warm.
America’s most famous back pain doctor said pain is in your head.  Thousands think he's right.
Pete Buttigieg’s latest plan is an appeal to Latino voters
Trump’s conflict with Iran exposed the real difference between Biden and Sanders
Here’s what we know so far about the Poway synagogue shooting
Andrew Cuomo has a plan to start reopening New York — eventually