How the coronavirus is disrupting US air travel, in 2 charts 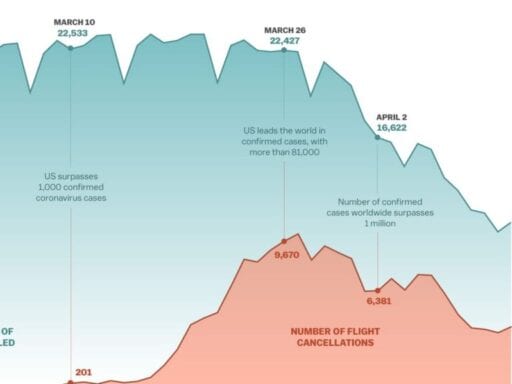 The TSA screened more than 2 million people per day in April of last year. Now, it screens about 100,000 daily.

The historic slowdown in air travel during the coronavirus pandemic has forced US airlines to cancel thousands of flights and ground hundreds of planes. While there isn’t a federal ban on domestic travel, many people have sought to stay home, following the shelter-in-place orders issued by states and local governments. The Centers for Disease Control and Prevention have urged Americans to avoid all nonessential travel and, in some cases, to self-quarantine for 14 days if they’re coming from Covid-19 hotspots like New York, New Jersey, and Connecticut.

By the second week of April, the number of scheduled flights in the US was down by about 58 percent compared to the same week last year, and flight capacity is expected to decrease as less people travel. And while planes are still flying, many are only carrying passenger loads of 5 to 15 percent, Business Insider reported. The nation’s busiest airports are consequently eerily void of travelers, and many are reducing operations, closing runways, and consolidating terminals to cut costs.

These two charts show how the coronavirus pandemic led to the severe drop in US air travel.

According to global travel data provider OAG, US airlines have greatly reduced their flight schedules in April. (Flight capacity indicates scheduled flights, which do not include the number of cancellations.)

“The US is probably two weeks behind [Asia and Europe] in terms of airline capacity being cut and that’s probably no surprise since it’s taken a bit longer for the coronavirus to get there,” John Grant, a senior analyst at OAG, told Vox.

On average, airlines were scheduled to fly about 22,000 flights a day in March 2020, but the number of daily cancellations started to increase by mid-March. About 11 percent of scheduled flights were canceled on March 18, and that figure rose to 40 percent by March 25. The daily number of cancellations has decreased going into April, but the percentage of scheduled flights cancelled has remained high: An average of 5,620 flights, or about 39 percent of US airlines’ schedules, were canceled from April 1 to April 12.

Airlines might still be flying some planes, but data from the Transportation Security Administration paints a clearer portrait of how many travelers there really are. TSA updates the number of travelers that pass through its checkpoints daily and compares it with information from the previous year.

Data from the month of March — during which many cities issued stay-at-home orders — reveal a dramatic drop-off in travel: About 35 million travelers went through TSA in March 2020, nearly a 50 percent decrease from the 72 million travelers screened in March 2019. Checkpoint numbers for the first two weeks of April suggest that even fewer will be flying this month: The TSA screened an average of just 110,644 passengers a day from April 1 to April 12, compared to an average of 2,316,910 over the same time period in 2019.

In the US, airlines are viewed by lawmakers as an essential service that must receive funding. Despite the unparalleled decline in travel nationwide, airlines are required to maintain certain flight routes to receive the $50 billion federal bailout package that’s part of the CARES Act. In a letter issued by the Department of Transportation in March, airlines must “maintain scheduled air transportation service as the Secretary [of Transportation] deems necessary to ensure services to any point served by that carrier before March 1, 2020.”

Still, flight crews and other airline workers on the job are concerned for their health: Some workers have died from contracting Covid-19, and most have been told by their airline not to speak to the press. It has become increasingly clear that fewer and fewer people are willing to fly — a situation that’ll likely worsen in the coming months, even if social distancing measures are relaxed. There isn’t a certain timeline as to when airlines will be able to operate normally again, and the International Air Transport Association predicts that the industry won’t financially recover until 2021. The pandemic, however, could have an even longer-lasting impact on the industry and how it operates, depending on how long people are told to stay home and remain fearful of air travel.