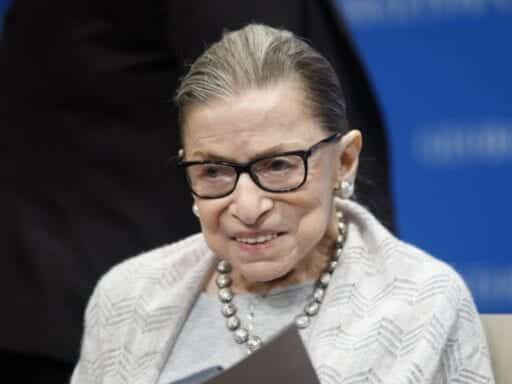 It’s not at all clear that a majority of the Supreme Court will protect women’s rights. Virginia’s incoming Democratic legislature could fix that.

On Tuesday, Democrats retook control of the Virginia legislature for the first time in decades. One upshot of this decision is that it could literally allow those Democrats to rewrite part of the Constitution.

As Vox’s Emily Stewart explains, 37 states have ratified the Equal Rights Amendment (ERA), which provides that “equality of rights under the law shall not be denied or abridged by the United States or by any state on account of sex.” It takes 38 states to reach the three-fourths threshold necessary to add the ERA to the Constitution — and Virginia is one of the states that has not yet voted to ratify.

The fight to ratify the ERA, which was proposed by Congress in 1972, is a bitter lesson in just how hard it is to amend the United States Constitution. Though the amendment was quickly approved by 35 states, its momentum stalled after opponents scared conservatives with warnings that it would lead to things like unisex bathrooms and same-sex marriage. After the 35th state (Indiana) voted to ratify in 1977, no other state joined on until 2017 when Nevada took it up.

Yet, if Virginia’s new Democratic majority does ratify the ERA after the new lawmakers take their seats this January, there is a world of uncertainty about what happens next.

For one thing, Congress imposed a deadline on the states to ratify the ERA, and that deadline expired in 1982. It’s not at all clear, however, that this deadline is legally binding. And there is a strong — though not at all airtight — legal argument that Congress can retroactively lift the deadline if Virginia ratifies the ERA.

The truth is that no one actually knows if the ERA will become part of the Constitution if Virginia becomes the 38th state to ratify it. But there are also very good reasons why Virginia Democrats may want to give it a shot despite this uncertainty.

Should the ERA become part of the Constitution, the immediate impact would be fairly minor. The ERA would marginally expand the Constitution’s protections against gender discrimination, but those protections are already quite robust. That’s because of a pioneering legal strategy, spearheaded by future Justice Ruth Bader Ginsburg in the 1970s, which convinced the Supreme Court that the Constitution already provides most of the benefits women would enjoy under the ERA. (More on that below.)

Yet, while the ERA would not have much of an immediate impact on American constitutional law, it is unclear whether Ginsburg’s legacy is durable. There are five justices on the Supreme Court right now who believe that the constitutional cases protecting against gender discrimination may not have been correctly decided. If Trump gets to fill more seats on the Supreme Court, those decisions that expanded protections for women will grow even more endangered.

The strongest case for ratifying the ERA, in other words, is not that it will revolutionize American law now. Rather, it’s that it will insulate many existing protections against gender discrimination from an increasingly conservative Supreme Court in the coming years.

That is, of course, assuming that ratifying the ERA is still possible.

When Congress proposed the ERA in 1972, it did so in a resolution that states that the amendment would become “part of the Constitution when ratified by the legislatures of three-fourths of the several States within seven years of its submission by the Congress.” Congress later extended that deadline to 1982.

But it is not at all clear that Congress can set such a deadline. In Dillion v. Gloss (1921), the Supreme Court said that “we entertain no doubt” of Congress’s power to “fix a definite period for the ratification.” But Dillion involved the 18th Amendment, which states in the amendment’s text that it “shall be inoperative” unless it is ratified “within seven years from the date of the submission hereof to the states by the Congress.”

The ERA’s text, by contrast, contains no such deadline; the deadline is mentioned in the resolution proposing the amendment but not in the text of the amendment itself. It is unclear whether that is good enough to impose a ratification deadline.

The most likely answer to this question can probably be found in Coleman v. Miller (1939), which held that “Congress, possessing exclusive power over the amending process, cannot be bound by, and is under no duty to accept, the pronouncements upon that exclusive power by this Court or by the [state] courts.” That suggests that Congress, and not the courts, would have to decide what happens to the ERA if Virginia ratifies it.

The question of what happens if Virginia ratifies the ERA, in other words, could wind up turning on what Mitch McConnell’s Senate does with it. And even if both houses of Congress do support ratification, it is still an open question whether the current Supreme Court would follow Coleman.

All of which is a long way of saying that we have no way of knowing for sure what happens if Virginia does ratify the ERA. That’s not really a reason not to ratify — although it could be a reason for Virginia to wait and see if Democrats regain the Senate in 2020 — but it is a reason to be uncertain about what the future will bring after ratification.

Justice Ginsburg achieved, through litigation, most of what the Equal Rights Amendment was supposed to accomplish

Had the ERA been ratified, it would have established that the Constitution treats gender discrimination with the same very high level of skepticism that it applies to race discrimination.

It’s worth noting, however, that the Constitution does not explicitly ban race discrimination outside of limited contexts such as voting. Rather, the 14th Amendment speaks more broadly, prohibiting states from denying “any person within its jurisdiction the equal protection of the laws.”

That language was key to the expansion of women’s rights in American jurisprudence. As a lawyer, Ginsburg tried to convince the Supreme Court that the 14th Amendment was expansive enough to subject any law that discriminates on the basis of gender to strict scrutiny as well, and she did convince four justices to embrace that view in Frontiero v. Richardson (1973). The fifth vote, however, proved elusive.

Instead, the Supreme Court embraced a compromise position in Craig v. Boren (1976). Under Craig, “classifications by gender must serve important governmental objectives and must be substantially related to achievement of those objectives.” This test, which is less demanding than strict scrutiny, is often referred to as “intermediate scrutiny.”

Yet, while intermediate scrutiny places a lower burden on the government than strict scrutiny, later cases clarified that the government still faces an extraordinarily high burden if it wishes to engage in gender discrimination. As Justice Ginsburg wrote for the Supreme Court in United States v. Virginia (1996), “a party seeking to uphold government action based on sex must establish an ‘exceedingly persuasive justification’ for the classification.”

Law professors can, no doubt, fill thousands of pages exploring the metaphysical differences between the requirement that laws engaging in race discrimination be “precisely tailored to serve a compelling governmental interest” while laws engaging in gender discrimination must only be supported by an “exceedingly persuasive justification.” But, as a practical matter, very few discriminatory laws will survive the test laid out in Virginia.

Current legal doctrine, in other words, mostly achieves the same outcome that would have been achieved if the ERA had been approved by three-fourths of the states. Under decisions like Craig and Virginia, courts must cast a very skeptical eye on any governmental action that discriminates on the basis of gender.

So why ratify the ERA at all? Because, while Ginsburg’s work has done a great deal to protect women from discrimination, there’s no guarantee that future Supreme Courts will agree with those earlier decisions.

Ginsburg became a judge in 1980, the same year that the New Deal coalition that had dominated politics for almost five decades broke and President Ronald Reagan ushered in a new era of conservatism.

One beneficiary of this conservative wave was a young lawyer named John Roberts, now the Chief Justice of the United States. Roberts quickly attached himself to a right-wing faction within the Reagan Justice Department that was steeped in the rhetoric of judicial restraint and that viewed the feminist victories Ginsburg spent the prior decade achieving as illegitimate judicial overreach.

As an aide to Attorney General William French Smith in 1981, Roberts prepared a draft article for publication by Smith. In it, Roberts wrote that the Court’s constitutional decisions protecting against gender discrimination were “an unjustified intrusion into legislative affairs.” Roberts later argued, unsuccessfully, that the Justice Department should not intervene on behalf of female prisoners who alleged sex discrimination by Kentucky’s prison system. His memo to Attorney General Smith relied on a similar argument to the one he made in the 1981 draft article.

It’s unclear whether these early writings represented Roberts’s core beliefs or if he was merely a political aide advancing the views of his boss. There is, however, at least some evidence that Roberts is philosophically opposed to constitutional gender equality. As a White House attorney in 1983, for example, Roberts criticized a version of the ERA because it would “ipso facto override the prerogatives of the states and vest the federal judiciary with broader powers in this area.”

Roberts is now the most powerful judge in the country, not just because he holds a formal job at the apex of the judiciary but because he is the most moderate member of the Supreme Court’s narrow Republican majority. If Roberts does adhere to the views he expressed as a young Reagan administration lawyer, then it is far from clear that there are five votes on this Supreme Court that agree with decisions like Craig and Virginia. On the current Court, there are four justices who are more conservative than Chief Justice Roberts.

I want to be clear about the uncertainty here: Roberts made his statements against decisions like Craig a long time ago. His views may have evolved.

Justice Samuel Alito’s majority opinion in Burwell v. Hobby Lobby (2014) does contain some language suggesting that the Court will not guard against gender discrimination as zealously as it guards against race discrimination. But Hobby Lobby did not present the question of whether the Constitution protects women from discrimination and the Court did not address that question at any length.

The point, in other words, is not that Ginsburg’s feminist legacy is on the cusp of being wiped away tomorrow. Rather, it’s that the fate of that legacy is uncertain, that its position grows more precarious as the Court moves further to the right, and that its position will remain precarious so long as the Constitution’s safeguards against gender discrimination hinge upon the Supreme Court’s willingness to read those safeguards into vague constitutional text.

Virginia lawmakers cannot know if they will succeed if they try to place the ERA into the Constitution. But the alternative is to leave the fate of Ginsburg’s feminist victories at the mercy of five conservative Republican men.

If those lawmakers care about preserving that legacy, that’s a good enough reason to give it a shot.

What we can learn from quarantine videos around the world
9 Right Wing Companies Every Progressive Should Boycott
Abortion bans criminalize doctors. For black physicians, the risks are even higher.
Report suggests Republican voter suppression tactics failed in Wisconsin
Read Trump’s very large, very strange Sharpie notes on impeachment
Trump’s call with Georgia’s secretary of state is a subversion of democracy