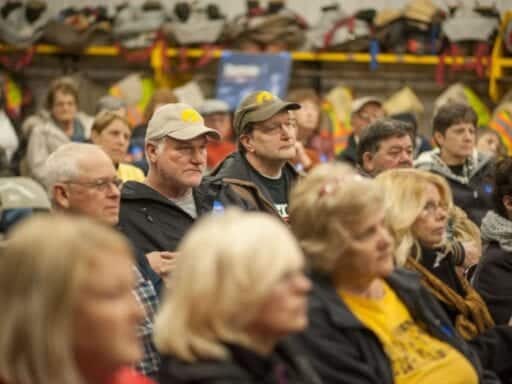 There won’t be one set of results but three.

The political world is waiting with bated breath to see who will win next week’s Iowa Democratic caucuses. But there’s another surprisingly murky question: How will we even decide who wins?

The problem is that there will be three results coming in after Iowa voters gather on the evening of Monday, February 3.

One will be for something called “state delegate equivalents” — this is the number previously used to determine the winner of the Iowa Democratic caucuses, something I’ll explain more in a bit. But the Iowa Democratic Party will also be tallying and reporting two other sets of numbers: how many actual people voted for each candidate in a given caucus — first an initial tally, then a final tally taken after lower-performing candidates are eliminated.

At the very least, this could be confusing. What if, for example, Sen. Bernie Sanders wins more votes but former Vice President Joe Biden wins more state delegate equivalents? It could make determining who “won” quite difficult.

In brief, the numbers that Iowa Democrats will report on caucus night are:

1) The pre-realignment vote total: This is the initial tally of how many people prefer each candidate at each of the more than 1,600 individual caucus sites (added together for a statewide total). Basically, it’s who got the most votes the first time around.

2) The final vote total: After the first tally, any supporters of a candidate who got less than a certain threshold of the vote (15 percent in most precincts) can shift their support to another candidate. Candidates who are below the viability threshold are eliminated as “nonviable,” and a new and final tally is taken. So this is who got the most votes after a reshuffling.

Announcing these three different results is a change for Iowa Democrats. In previous years, only the state delegate equivalents were recorded or reported. So when Hillary Clinton “beat” Sanders 49.84 percent to 49.59 percent in the 2016 caucuses, those percentages were of state delegate equivalents, not votes. We don’t know how many actual votes each candidate got that year.

This year, for the first time, we’ll get vote results too. That will provide more transparency — but could result in a muddle.

The traditional metric for determining who wins is the state delegate equivalents, since, after all, the Democratic nomination contest is a competition to win delegates. Yet the actual vote totals may seem more intuitively useful than something based on a complex formula. And Iowa’s importance has never really been about delegates anyway — it’s about setting the narrative for the media and political world. So how will this narrative be set?

How the Iowa caucuses got to this strange place

Before looking under the hood at how the Iowa Democratic caucuses work, we should note that Iowa Republicans have quite different caucus rules: just one ordinary vote, with a secret ballot, and no realignment or complicated “state delegate equivalent” formula. What they do looks a lot more like an ordinary primary.

Iowa Democrats, though, have argued that a caucus should look and feel different from a primary. They want public debate and deliberation. They want attendees to have the opportunity to change their minds. And these caucuses are technically just the first step in a delegate selection process that goes forward to county conventions and eventually to Iowa’s state convention.

Fair enough. Yet Iowa Democrats also want influence over the national nominating process. They want to produce a clear result for the media and political world to make hay over. So they used a complicated metric known as “state delegate equivalents” that they began using to report candidate results on caucus night.

Again, fair enough. Yet Iowa Democrats have also faced criticism for the whole process’s complexity, its lack of transparency, and its potential barriers to participation (caucus gatherings can last for hours, which can be a problem for people who have child care or work, or don’t want to drive late at night).

These criticisms came to a head after the close Clinton-Sanders contest in 2016. Caucus precincts, as was customary, didn’t record how many votes each candidate got. So when reports of miscounted results spread on social media and in the press (many from Sanders supporters), there was no paper trail that could prove or disprove their claims.

That’s why, in 2020, Iowa Democrats have decided to record and report the actual vote totals for the first time, via presidential preference cards that will look like this:

They’ve also simplified and limited the realignment process, in which people can change their support to other candidates. And they’ve locked in the national delegate allotments per candidate to the caucus night results (rather than allowing them to change in later county or state conventions).

So now the Iowa caucuses are no longer purely traditional caucuses — they’re a hodgepodge combining primary and caucus elements.

On caucus night, Democrats will gather at 1,678 precinct caucus sites and more than 90 “satellite caucus” sites for Iowans who can’t make it to their precinct caucus.

To get a sense of how results at all these individual caucus sites become statewide numbers, let’s walk through one hypothetical precinct.

The first step (after some speeches and discussion) is for attendees in the room to divide up, moving to sit or stand with others who support the same candidate. So let’s say there are 100 attendees at this precinct caucus, and they split up the following ways:

This would be the pre-realignment vote total for this precinct, and this result would be recorded and reported on the preference cards. (There is no secret ballot.)

The number that matters next is the viability threshold — which is 15 percent in most precincts (but is higher in some precincts that have three or fewer delegates at stake). Let’s say it’s 15 percent in our sample precinct, though.

The way things work this year, a 15 percent threshold means supporters for candidates with 15 percent or above would be locked in — they can’t change their votes now. So here, those initial Sanders, Biden, Warren, and Buttigieg supporters are all locked in.

However, Klobuchar has fallen short, with only 14 out of 100 supporters. So her supporters are now free to switch to support any of the viable candidates (or none of them, if they prefer). They’d join another candidate group and record their new vote on a preference card.

So let’s say Biden gets nine of these Klobuchar supporters, Sanders two, Warren three, and Buttigieg zero. The new vote total would be:

And that’s the final vote total. This would also be recorded and reported. As you can see, it moved Biden from second place to first. Realignment can be important when there’s a split field and no one candidate is running away with a victory. And this realignment process will play out individually in each precinct (meaning it won’t always be the same candidates who are viable).

So to get the statewide totals for both the pre-alignment vote and the final vote, you just add up those numbers from each individual caucus site.

Now, when delegates come in is when it gets really confusing. So let’s go through it in excruciating detail.

It will be familiar to you from previous primaries that the overall vote result in a state contest can differ somewhat from its delegate results. That’s because Democrats have preset formulas for how their national delegates are allotted (some from statewide results, some from congressional district results, and proportionally to candidates clearing 15 percent of the vote).

But the Iowa caucuses complicate things further because there are three different sets of delegates involved.

So, backing up: Remember that the key metric on caucus night that Iowa Democrats have tracked in years past is called state delegate equivalents.

Let’s return, then, to our final vote total above: Biden 32, Sanders 28, Warren 24, and Buttigieg 16. And let’s say this result came in the Fourth Precinct in Adair County. How does that translate to delegate results?

Those, then, are the state delegate equivalent results for this precinct.

So yes, the caucus-goers at this individual site will be fighting for tiny pieces of a fraction of a state delegate. And then we repeat this for 1,677 other precincts in Iowa and the satellite caucus sites, add up all those tiny pieces, and we’ll have our results by state delegate equivalents. Simple, right?

Iowa Democrats want to be fair to candidates but also have a clear winner. The result is a mess.

The funny or perhaps maddening aspect to all this is that the Iowa caucus results barely matter to the true way Democrats choose their nominee: national convention delegates.

This year, Iowa has 41 of those pledged delegates — about 1 percent of the national total. And since they’re allotted proportionally based on the above results, it’s tough for any candidate to rack up a big lead there. (It would barely matter even if a candidate did, because the overall number at stake is so small.)

But the caucuses’ big impact on the race has little to do with delegates anyway. It’s all about the perceptions of the political world. The media, party insiders, donors, activists, the candidates themselves, and even voters elsewhere look at what can be relatively small differences in Iowa results — and come to conclusions about which candidates have “won” or “lost.”

You’ll notice that in our hypothetical precinct results, though, we got three different results for who “won”:

Of course, the result didn’t change that much; Biden and Sanders were the top two candidates and are close to each other in all three metrics. But the state delegate equivalent formula means that discrepancies from the vote total may — will — be introduced in each those 1,600-plus precincts. If one candidate ends up being systematically disadvantaged by these discrepancies, a different metric could mean a different “winner.”

It could all result in a muddled mess. If a candidate gets the most votes but not the most state delegate equivalents, he or she will surely try to claim victory, with good reason. For Democrats hoping to winnow their field and start to coalesce around a candidate, that might be unpleasant. But for those who have long believed Iowa has far too much influence on the nominating process, an incoherent outcome could actually be a good thing.