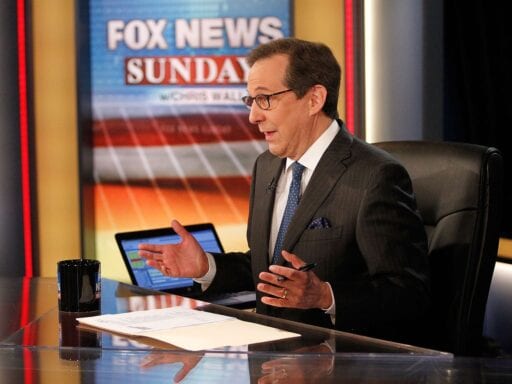 Chris Wallace on the set of his Fox News show in 2017 in Washington, DC. | Paul Morigi/Getty Images

Chris Wallace, who moderated the first debate, was “jealous.”

Chris Wallace, the anchor of Fox News Sunday who moderated the infamous interruption-filled first debate, immediately said how “jealous” he was with how tamely tonight’s events proceeded.

“First of all, I’m jealous,” Wallace said. “I would have liked to have been able to moderate that debate and to get a real exchange of views instead of hundreds of interruptions.”

Bret Baier, another top anchor at the conservative network, added, “It was a debate of substance.” Compared to the first iteration, that’s true. This debate got into the weeds on how to handle the coronavirus, climate change, health care, and even a bit on foreign policy. And without so many interruptions — mainly from the president — both candidates were able to make their pitches to voters.

That Trump mostly kept his cool is what led senior political analyst Brit Hume to praise him, though he noted Biden met the president blow for blow.

“I thought Trump gave his best debate performance perhaps ever — but I think the vice president, the former vice president, fought him to at least a draw,” Hume said in his initial reaction. “I don’t know this debate will change the state of the race. I think probably not.”

Of course, Fox News was still Fox News. The channel tweeted out portions of the debate that focused on Joe Biden’s son Hunter’s business dealings, which Trump allies are trying to spin up into a scandal to hurt the Democratic nominee. And Sean Hannity, the prominent talk show host who’s close with Trump, spent much of his opening monologue bashing Biden as a bad, corrupt candidate.

But as far as initial reactions go — Wallace feeling jealous, Baier happy with the substance, and Hume calling the race a draw — perhaps the real surprise was how normal Fox News seemed right after the debate.