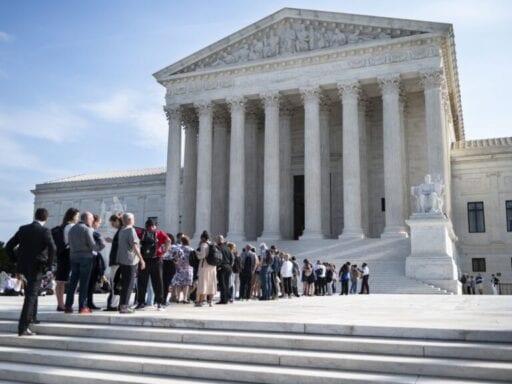 Share
Loading...
Crowds line up outside the Supreme Court as it resumes oral arguments at the start of its new term on Monday, Oct. 7, 2019. | CQ-Roll Call, Inc via Getty Images

If the Trump administration gets its way, the court could destroy sex discrimination law as we know it.

The Supreme Court hears oral arguments on Tuesday in three cases that could decimate legal protections for LGBTQ workers in America.

The cases, Altitude Express Inc. v. Zarda, Bostock v. Clayton County, and R.G. & G.R. Harris Funeral Homes Inc. v. EEOC, are about whether employees can legally be fired for their sexual orientation or gender identity. Harris Funeral Homes involves Aimee Stephens, who was fired from her job because, she says, her boss disapproved of the fact that she is transgender. The employees in Zarda and Bostock are gay men who say they were fired because of their sexual orientation.

“For LGBTQ workers and for LGBTQ people in general,” the court’s decision in the cases “will be a declarative and transformative statement of our legal rights under federal law,” Chase Strangio, an attorney with the American Civil Liberties Union who will be arguing in the Harris Funeral Homes case on behalf of Stephens, told Vox. A decision against the workers could affect not just employment but housing, health care, and education as well and even contribute to the epidemic of violence against trans women of color.

Many feminist groups, including the National Women’s Law Center, have filed amicus briefs in support of Stephens and the other employees in the cases. But as Katelyn Burns reported at Vox last month, some anti-trans groups that purport to be feminist, including one called the Women’s Liberation Front, are siding with the employer in Harris Funeral Homes, arguing that giving anti-discrimination protections to trans women will harm cis women.

However, advocates for Stephens and the other employees say the opposite is true. The three cases before the court on Tuesday actually threaten the civil rights of everyone in America, regardless of gender identity or sexual orientation. If the court finds in favor of the employers, the advocates say, it wouldn’t just erase the protections that allow LGBTQ people to pursue careers and support their families — it would essentially destroy sex discrimination law as we know it.

But historically, LGBTQ workers have been able to seek legal recourse under Title VII of the Civil Rights Act of 1964, which bans discrimination on the basis of sex. In particular, they’ve been able to point to the 1989 Supreme Court case Price Waterhouse v. Hopkins, which found that employers cannot discriminate against employees based on sex stereotypes — for example, a boss cannot fire a woman for being, in the boss’s view, too masculine.

Over the years, many lower courts have found that discrimination against LGBTQ people at work is essentially discrimination based on sex stereotypes. For example, “a trans person by definition does not meet expectations of how a man or woman should be — that is, to have been assigned a particular sex at birth,” Strangio explained.

But President Trump’s Department of Justice, in a Harris Funeral Homes brief, is asking the Supreme Court to find that employers can discriminate based on sex stereotypes as long as they do so for both men and women. “They want to create a world where it would be lawful to fire someone for being insufficiently feminine, as long as you could show you would fire someone for being insufficiently masculine,” Strangio said.

If the court rules in their favor, the implications for LGBTQ rights are immense. LGBTQ people already face high rates of employment discrimination, Strangio said. “You already have people that are pushed out of the workplace because of bias, and it’s already hard to prove employment discrimination even where you are protected,” he explained. A decision against the workers would only make matters worse.

And the decision could have implications far beyond the workplace, experts say.

“The way that the federal civil rights laws have developed is that these statutes look to each other,” explained Sunu Chandy, legal director at the National Women’s Law Center. Courts and federal agencies will look at how Title VII is interpreted when they are interpreting Title IX, which governs sex discrimination in education, for example. That means LGBTQ people could stand to lose not just their jobs as a result of the three cases at issue Tuesday, but also potentially their housing and access to health care and education as well.

Those losses could create a cumulative effect in people’s lives, with employment and housing discrimination pushing them into homelessness, which in turn would leave them vulnerable to violence, Strangio said: “There is a direct correlation between the outcome of this case and the epidemic of violence that is already being experienced against black trans women.”

The cases could also change the face of sex discrimination law

For these reasons and more, many medical and legal groups have filed amicus briefs in support of Stephens and the other employees in the cases, as Burns notes. But some groups that purport to be feminist are siding with the employers. A group called the Women’s Liberation Front (WoLF) has filed an amicus brief in Harris Funeral Homes on behalf of Stephens’s employer, arguing that “Stephens is a man” who “wanted to wear a skirt while at work.”

WoLF told Vox in a statement that “the redefinition of the word ‘sex’ to mean ‘gender identity’ would have myriad harmful effects on women and girls, and women and girls as a distinct category deserve civil rights protections.” As Burns notes, WoLF is part of a larger group of “trans-exclusionary radical feminists” (they prefer the term “gender-critical feminists”) who believe that trans rights are a threat to cisgender women.

But advocates on behalf of Stephens and the other employees in the cases before the court say that actually, women and girls — and, in fact, Americans of all genders and sexual orientations — will lose protections if the employers get their way.

If the court rules that discrimination on the basis of sex stereotypes is legal, anyone who doesn’t conform to an employer’s view of femininity or masculinity could be at risk, the advocates say. Women, in fact, would likely bear the brunt of this new reality, Chandy said.

“It’s often women who are held to these very tight and strict gender norms, and if there’s going to be a change in the law so that sex stereotyping is allowed, you can be sure that that is going to harm women” whether they’re cis or trans, she explained. For example, “a cisgender woman who wants to wear her hair short” could legally be fired if discrimination based on sex stereotypes became legal.

Though women might experience a disproportionate impact, it’s hard to imagine a group in society who wouldn’t be affected by such a change. Cisgender, straight men could be vulnerable to discrimination if they have primary responsibility for their children, said Suzanne B. Goldberg, director of Columbia Law School’s Center for Gender and Sexuality Law and the co-author of an amicus brief on behalf of the employees in the three cases before the court on Tuesday.

Of course, the court could try to issue a narrower ruling than the one the Trump administration is asking for, arguing that Title VII protects straight, cisgender Americans but not LGBTQ people. However, advocates for LGBTQ rights and gender equality in the workplace say there’s no real way to do this that makes legal sense.

She gave herself as an example. “I have a picture of my spouse, a female spouse, at my desk, that I’m looking at.” If an employer were to fire her for having such a picture but allow a man to keep a picture of his wife at his desk, “that’s absolutely sex discrimination.”

The broad implications of the case make it “incredibly tragic” that purportedly feminist groups are siding with the Trump administration, Strangio said. “If you start carving out and narrowing the scope of federal civil rights protections, that’s going to hurt you too,” he said. “If we truly are pitted against each other, then we all lose out in the end.”

Why Trump’s trade agenda might worsen America’s cheese glut
How affluent people can end their mindless overconsumption
5 winners and 7 losers from a Succession that had much more embarrassment than usual
A historic new Congress has just been sworn in
Why 150,000 people are calling for Netflix to cancel the teen comedy Insatiable before it debuts
Merkel’s party picks another centrist as its leader — and maybe Germany’s future chancellor