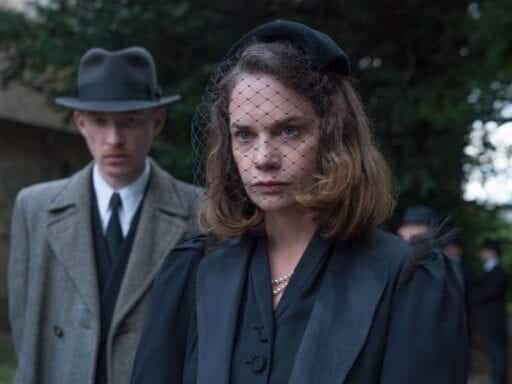 The gorgeous new Sarah Waters adaptation asks the classic horror movie question: Is it a ghost, or is it the patriarchy?

Beloved British novelist Sarah Waters is famous for mixing the classic forms of the Victorian novel with modern literary sensibilities, feminism, and queerness. The new film adaptation of her 2009 novel The Little Stranger, directed by Room’s Lenny Abrahamson, follows in the footsteps of 2016’s The Handmaiden by distilling one of Waters’s books down to its essence and emerging with something even more glorious than the source material.

In the case of The Little Stranger, the result is a ghost story that doubles as a chilling look at toxic masculinity. By skillfully framing the narrative from deep within its main character’s viewpoint, the film creates a visceral experience of the way economical hierarchies and unequal gender relationships can fuel obsessive male entitlement — and ultimately, perhaps, even violence.

This article contains spoilers for the film and book.

The Little Stranger is a departure from Waters’s earlier works, but as the film highlights, it’s a strident feminist story layered in a standard gothic fable

Among Waters’s works, which range from her delightful picaresque debut Tipping the Velvet (1998) to the slow-building crime novel The Paying Guests (2014), The Little Stranger is an anomaly on multiple fronts. It’s the first of her novels to feature no overtly queer characters, and the first told entirely from a male point of view. Additionally, it’s only the second of her novels not set in the Victorian era; instead, it looks at the crumbling class system of post-World War II Britain using the tropes of turn-of-the-century gothic writers, most notably Henry James.

Waters’s use of these tropes is very on-the-nose: the unreliability of her narrator, staid country doctor Dr. Faraday (played in the film with rigid calculation by Domhnall Gleeson), announces itself from the first page, and the layers of psychosexual tension and frustration between her characters are thick. The use of Hundreds Hall, the dilapidated mansion at the novel’s center, as an allegory for the decay of the British upper class is so overt it almost makes the book feel like a plain writing exercise — a straightforward iteration, rather than a subversion.

In adapting the book, Abrahamson and screenwriter Lucinda Coxon (The Danish Girl) made the brilliant decision to upfront Waters’s subtext. In the book, Faraday’s unreliable narration is a ripple beneath the action until nearly the end of the narrative, but Abrahamson and Coxon make Faraday’s deceptive point of view the main driver of the film’s tension.

In doing so, they bring the novel’s subtle feminism to the fore. It turns the film into a deft exploration of controlling and entitled masculinity, via the way Faraday exploits the patriarchy’s repressed gender dynamics in order to obtain what he most wants — total control over Hundreds Hall. These themes are somewhat obscured by the novel’s preoccupation with class dynamics, but they’re there if you know to look — and the film orders you to look, by drawing constant attention to Faraday’s greedy obsession with Hundreds Hall.

As a lower-class child, he visited the looming estate owned by his mother’s previous employer, then the immaculate, prosperous heart of the neighborhood, and was immediately filled with longing to be a part of it — of the aristocratic Ayres family who lived there, yes, but also of the house itself, and all that it stood for: gentry, respectability, and tradition. The adult Faraday’s longing for the house has sharpened into a calculated, single-minded focus: At the first opportunity, he manipulates his way into an ongoing relationship with the Ayreses and begins to chronicle the family’s steadily escalating chaos — a chaos that seems to have begun with his arrival.

It’s always difficult to capture unreliable narration onscreen, at least not without using a number of distinctly cinematic techniques — think Memento, Inception, or Donnie Darko. When the cinematic story is a ghost story, there’s a general tendency to rest on the time-honored question of whether the disturbance is paranormal or all in the protagonist’s head. (For a great recent example of a ghost story probing a little deeper than that while mostly treating its subject literally, see The Conjuring 2.)

But The Little Stranger isn’t ultimately super-interested in that aspect of its narration, nor is it interested in using cinematic tricks of the trade to convey its narrative uncertainty when dramatic tricks will do just as well. Sure, there may or may not be a poltergeist, and it may or may not be psychological in origin, but what Abrahamson is mainly concerned with is what the Hundreds Hall inhabitants are experiencing as Faraday steadily encroaches upon their lives.

There’s the naively trusting Betty (Liv Hill), the housemaid who seems to view Faraday as something of a family savior, perhaps as a reflection of how he views himself. There’s the skeptical matron Mrs. Ayres (Charlotte Rampling), who at one point sharply — and perhaps fatally — reminds Faraday he’s not a resident of the house. The heir, Roderick (Will Poulter), is a badly scarred war veteran who’s drawn to the hope Faraday offers of temporary relief from his mental and physical anguish.

And finally, there’s our focal character, Charlotte (the ever-fantastic Ruth Wilson). As the only daughter, Charlotte becomes briefly romantically entangled with Faraday, in a strange and tense courtship that embodies the way women are often pressured into being polite, which can lead to them saying yes — or at least not saying no — when being pursued by a determined man.

Wilson telegraphs Charlotte’s growing unease with Faraday’s constant presence in the house and increasing influence over their lives. As in James’s Turn of the Screw (magnificently adapted as the 1961 Jack Clayton film The Innocents), we’re left to gradually perceive that our protagonist isn’t who he appears to be, through the other characters’ slow realizations about his real personality and motivations.

As the strange events in the house ramp up, the tensions between Charlotte and Faraday eventually lead her to resist his subtle attempts to control her and the household. Throughout the film, we’ve seen these attempts become more overt, in conjunction with his ever-increasing desire to possess Hundreds Hall. In a desperate ploy to acquire it through marriage, he basically tells Charlotte that they’re getting married; as she tries to delay the inevitable, he buys her a wedding dress in order to force her to name a date; and when she and the other family members attempt to exert their authority and autonomy over the house, against his wishes, he reacts with passive-aggressive resentment, and perhaps even violence.

The film could have focused on whether or not Faraday’s experiences of the paranormal happenings in the house were all in his head; this is the thrust of Waters’s narrative, and the path most conventional ghost story films would have taken.

But The Little Stranger opts to home in on whether its other characters’ experiences of Faraday’s pernicious influence are all in their heads. In a way, it’s as if we were watching Gaslight, the classic tactic-naming film about domestic abuse and emotional control, from the perpetrator’s point of view rather than the victim’s. Throughout the film, we can see Charlotte questioning whether her read on Faraday is correct, then brushing aside her misgivings in order to receive him with politeness.

Because their interactions are framed through his point of view instead of hers, we fully experience his driving motivations: his obsession with the house, his jealousy of the Ayres family and their social status, and his subtle contempt and impatience with the family for letting the place go to ruin. His entitlement and attendant behavior are what create the true seismic shifts within the house; the house’s paranormal utterances feel more like aftershocks.

It’s all a gripping portrait of toxic masculinity. Faraday’s fixation is on the house, rather than with another human being, but as an illustration of the patriarchal emphasis on control and conquest at any cost, it’s chilling. In childhood, we see him violently, almost resentfully, rip off a chunk of the house’s decorative trim, determined to have some piece of Hundreds Hall, even if it means destroying a part of it it. As an adult, he returns with the same determination — and it’s the power he has to break much more than just plaster that proves most terrifying in the end.

“Don’t be a tough guy! Don’t be a fool!”: Read Trump’s wild letter to Turkey’s Erdogan
How the Republican tax cuts are failing workers, in one chart
What Mike Bloomberg actually did in New York City
Why Elizabeth Warren is losing even if all your friends love her
Demand for meatless meat is skyrocketing during the pandemic
This new translation of Beowulf brings the poem to profane, funny, hot-blooded life

Factory farms are an ideal breeding ground for the next pandemic

Geothermal energy is poised for a big breakout